Orthodox Students Threaten Suit Against Yale for Its Housing Policy 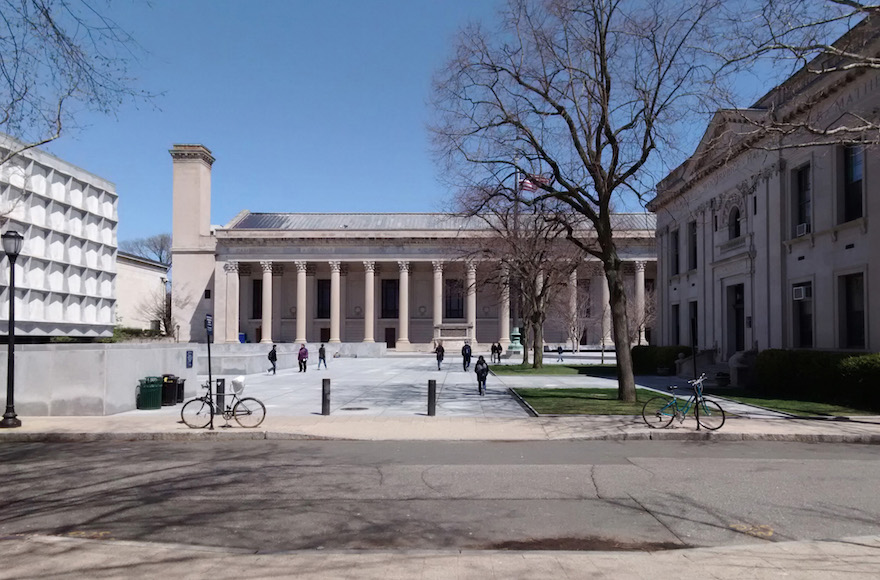 Jeremy Hershman can’t live in a Yale dormitory. It’s not that he doesn’t want to; his religious beliefs prevent it.

The 19-year-old from Cedarhurst, N.Y., has repeatedly told Yale officials that his Orthodox Jewish convictions are not compatible with the mixed-sex atmosphere of dormitory life.

But Hershman, who is set to enter his sophomore year when school opens next week, is in a bind.

Yale housing policy requires that all freshmen and sophomores live on campus unless they are married or over 21 years old.

Hershman and four of his schoolmates have threatened to sue Yale if the university does not change its policy.

For its part, Yale has threatened disciplinary action if the students do not live on campus.

But this has not deterred the two sophomores and three freshmen who have decided that come next week, they will be living off campus, paying thousands of dollars for rooms they will not use.

“Yale permits and often encourages a lifestyle in the dormitories that there’s no way a fully observant Orthodox Jew can live in,” Hershman said in an telephone interview from his home on Tuesday.

He said he will live with two Orthodox graduate students near campus and will pay $7,000 to Yale for room and board in addition to his rent this year.

Last year, when they were entering freshmen, the school had assured Hershman and Lisa Friedman, another Orthodox Jewish student, that a single-sex dorm would accommodate their concerns.

But when Hershman arrived on campus, he said, he found bathrooms that were used by both men and women.

He also attended a freshman orientation lecture that included a speech on how to politely ask your roommate to leave “when you want to have sex with your partner,” he recalled.

He never slept in the dorm.

“The obligation to exercise care and modesty in living accommodations so as not to permit even inadvertent inappropriate encounters between men and women is a long-standing rule of Jewish religious observance,” Nathan Lewin, an attorney, recently wrote to the dean of Yale College, Richard Brodhead.

“Their religious convictions forbid them from residing in dormitories that are readily accessible to members of the opposite sex for extended periods of time, including overnight visits,” Lewin said of the students.

“He kept impressing on me that this is an important policy of Yale, to have kids live in dormitories,” said Lewin, who said he knew of no similar problem at any other university.

Tom Conroy, deputy director of public affairs at Yale, said that Yale places much emphasis on small residential communities, which include libraries and dining services, as the center of student life.

Conroy said that such living is an “integral and important” part of attending Yale.

He said the university is open to discussing a solution for the students that would not involve living off-campus.

Hinting that Yale might drop its threaten to discipline the students, he added that the college does not conduct bed checks.

For Lewin, a prominent Washington attorney who has frequently represented Orthodox Jews in discrimination claims, this is a simple case of “religious discrimination.”

Lewin vowed to file a lawsuit if Yale does not change its policy.

So far, Yale is not budging.

“We certainly do not believe that Yale is under any legal obligation to grant a waiver to these students. We have no plans to do so,” Conroy said.

In an exchange of letters in the spring between Friedman and the college’s dean of students, Betty Trachtenberg, the school’s position was made clear.

“Rather than addressing the religious concerns expressed by the few students,” Friedman wrote to Trachtenberg, “you said that students with those religious views should not have sought admission to Yale.

“It is hard to believe,” Friedman continued in her letter, “that a university which boasts around the world that it has a diverse and multicultural community would be inhospitable to individuals with these sincerely held beliefs.

“My parents cannot and should not be forced to bear the cost of double lodging, as they have been compelled to do this past year. To impose this tax on them is to penalize them for their, and my, religious beliefs.”

In a terse response dated June 17, Trachtenberg wrote, in part, “We will do everything to make residential college living not only acceptable, but pleasurable to you.

“After consultation with many members of the community who care very deeply about Yale’s educational philosophy, one that includes the importance of the residential colleges as a force in a Yale education, I must again deny your request to live off-campus.”

Lewin was particularly put off by another comment Trachtenberg wrote to Hershman.

“I personally know many Orthodox Jewish students who live in the residential colleges throughout their four years at Yale and have done so without compromising their religious practices and beliefs,” she wrote.

In his letter to Brodhead, Lewin wrote that Trachtenberg’s observation about other Orthodox Jews “does not diminish the validity of the religious principle that is at stake.”

For his part, Hershman is still hoping that Yale will change its mind.

“I love it there,” he said. “It’s unfortunate this is happening.”