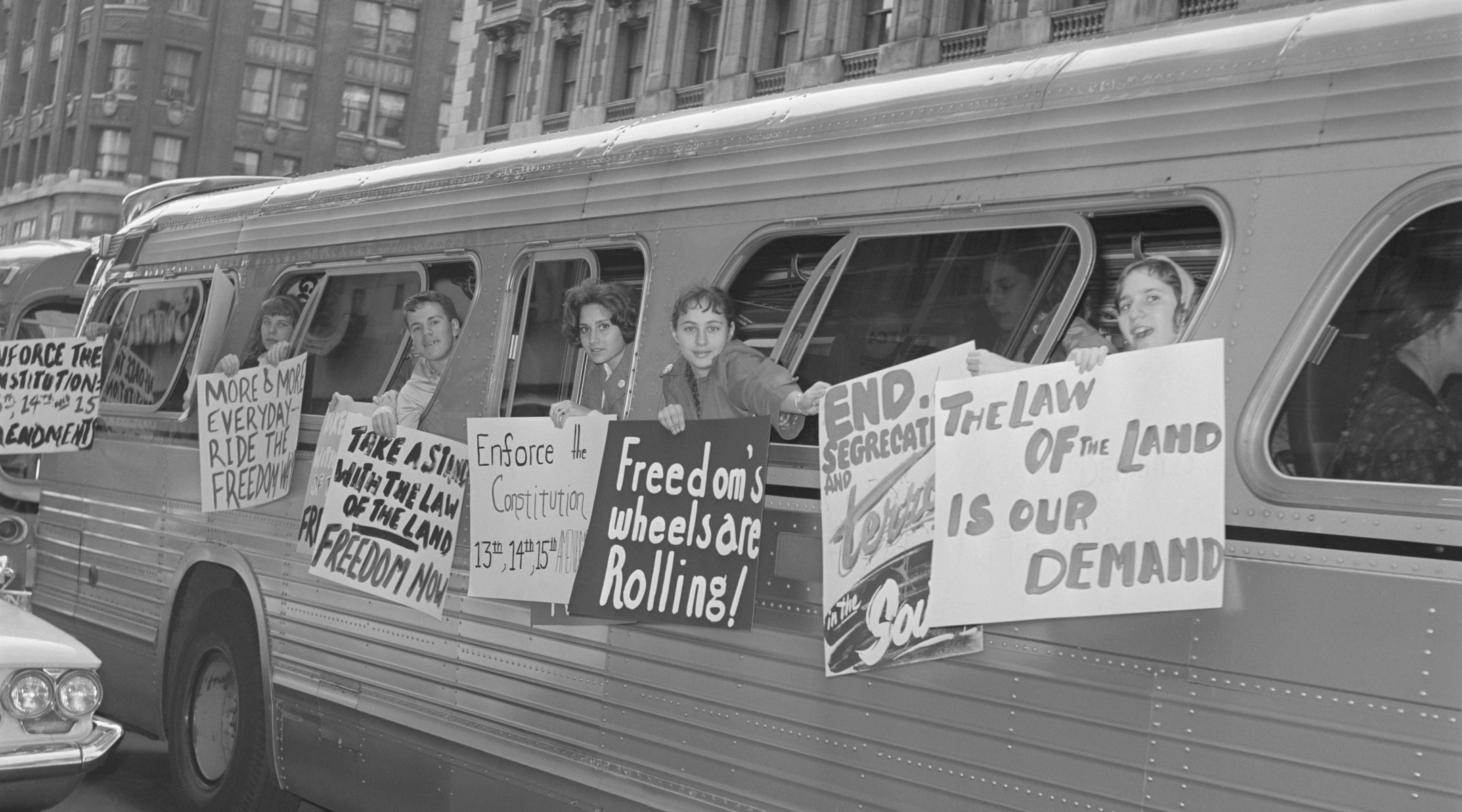 The "Washington Freedom Riders Committee" on a bus from New York City to Washington, D.C., May 30, 1961. (Bettmann/Getty Images)
See Original Daily Bulletin From This Date
Advertisement

A new Freedom Ride, honoring the memories of three civil rights activists — two Jewish and one black — slain during the 1964 “Freedom Summer” in Mississippi, is making its way south.

The weeklong trip of mostly black and Jewish activists, which left Wednesday morning after a ceremony at the Museum of Jewish Heritage — A Living Memorial to the Holocaust in New York, includes stops at predominantly black universities and sites such as the U.S. Holocaust Memorial Museum in Washington and the Civil Rights Memorial in Montgomery, Ala.

For one Jewish participant, 55-year-old Allan Gould, the trip will be down memory lane. As a college student in Detroit, Gould traveled down to Mississippi during “Freedom Summer” to teach in a school. He was stationed five miles from the site where the bodies of the Jewish and black activists were found.

“I remember the fear and the camaraderie from that summer,” he said. “It was an almost ethereal time. We were working with people who were stunned to see us down there.

“In a way this is a nostalgia trip, but it’s also a way of making a statement that we haven’t forgotten,” said Gould, now a writer and journalist living in Toronto. He said he was most looking forward to visiting the Harveys, the black family that risked their lives hosting him.

At Gould’s side was his 25-year-old son, Judah, who has grown up on stories from that summer. “I want to walk the footsteps he walked,” the younger Gould explained, adding that he hoped the trip would also be one of “personal growth.”

As the activists set out to re-enact the freedom rides of the early 1960s, black and Jewish lawmakers gathered in Washington on Wednesday to honor the memories of the slain civil rights workers — James Chaney, Andrew Goodman and Michael Schwerner — and to rededicate themselves to the alliance that drew the black and Jewish communities together in the civil rights struggle.

Reps. John Lewis (D-Ga.) and Bob Filner (D-Calif.), who participated in the Freedom Rides as young students, were honored for their involvement in the civil rights movement at a Capitol Hill ceremony put together by the New-York based Foundation for Ethnic Understanding, the National Association for the Advancement of Colored People and the World Jewish Congress.

Filner and Lewis rode on the same bus in 1961 protesting segregated seating of interstate passengers.

The two future congressman were both arrested in Jackson, Mississippi by the head of the state’s National Guard, G.V. “Sonny” Montgomery, who, as it turned out, would also be elected to Congress.

“We put ourselves in the way,” Lewis recalled on Wednesday. “We put our bodies on the line because we believed in something. We must tell young blacks and young Jews today to believe in something.

“We can, as we move into the next century, create one America, one family, one house.”

Filner said he understood early on “that if somebody in America was denied opportunity, that if there was racism in America, we as Jews were certainly at risk, so I went and got on that bus.”

Among the numerous Jews who boarded the buses in New York on Wednesday were two rabbinical students at the Jewish Theological Seminary and a young staff member from Chicago’s Jewish Council on Urban Affairs, who hoped to share organizing ideas with other activists.

“This is a unique opportunity to participate in a renewing effort to fight for civil rights in this country,” said Bill Plevan, the president of JTS’ student body. Asked to identify key civil rights issues today, he pointed to the disparities in income and opportunity.

Nadia Campbell, who is black and a recent graduate of Hunter College, said she expected the trip to be the “experience of a lifetime.”

“I’m looking forward to seeing the historical roots laid down by people before me, and I want to be able to bring back something,” she said.

“People need to know what the civil rights movement was all about. I think our youth have forgotten.”

History had also drawn Tanya Everett, a black 24-year-old elementary school teacher, to the trip, but she said she was also looking forward to “the chance to work together with other ethnicities.”