Jewish flavor to the World Cup 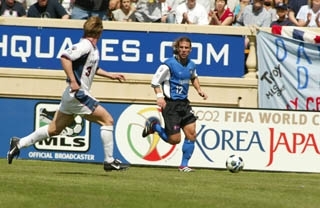 Soccer player Jeff Agoos, right, hopes to be in the starting lineup when the United States competes in the World Cup in June. (John Todd/MLS/Getty Images)
Advertisement

LOS ANGELES, May 22 (JTA) — Jewish soccer star Jeff Agoos was so angry when he was the last player cut from the 1994 U.S. World Cup squad that he threw his uniform into a fireplace and burned it. “I had gone through two years of grueling training and was very disappointed,” said the 34-year-old defender for the San Jose, Calif., Earthquakes. Agoos made the World Cup team in 1998, when the United States was eliminated in the first round, but didn´t get to play. He made the roster again this year and hopes to be in the starting lineup when the United States plays its first match, against Portugal, on June 5 in Suwon, South Korea. Japan and Korea are jointly hosting the 2002 World Cup. The World Cup pits the globe´s top soccer nations against each other every four years, and is considered the world´s greatest single sporting event. American soccer is still catching up with the rest of the world, and advancing beyond the first round this year would be considered an achievement for the Americans. Born in Geneva, Jeff was raised in a “somewhat religious” home, halfway between Reform and Conservative. “I went once a week to Sunday school and we observed the holidays,” he said. Six months after his birth, his parents moved to South Africa, and four years later moved again, this time to the United States, settling first in Atlanta and finally in Dallas. “I started playing soccer when I was 8 years old, along with basketball and other sports, but as I got older, I settled on soccer,” said Agoos, whose nickname is “Goose.” He started playing professionally in his last year of college at the University of Virginia, and after a stint in Germany, started playing U.S. professional soccer in 1996 with D.C. United. In February 2001, he was traded to the Earthquakes and led the team to its first Major League Soccer Cup championship, while winning the MLS Defender of the Year award for himself. Agoos, who stands 5´10″ and weighs 175 pounds, starred on the U.S. team in the 1985 and 1989 Maccabiah Games, both won by the host Israeli team. He represented the United States again at the 2000 Olympics in Sydney, Australia, where his team placed fourth, the best American showing ever. In his personal life, Agoos is a bachelor and said that “I´m not as much Jewishly involved as I would like to be, but I observe some of the holidays.” Jeff´s younger brother, Brad, is the assistant soccer coach at the University of California at Berkeley. During his 14-year playing career, Agoos has seen the level of American soccer “improving greatly, with a much better talent pool. We still have some ways to go, but we can now compete with any country in the world.”