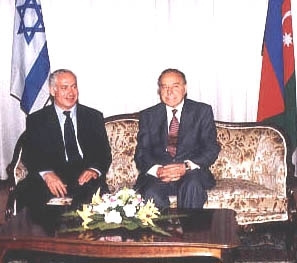 BAKU, Azerbaijan, Aug. 11 (JTA) — Lawyer Eduard Chernin keeps an Israeli flag on his desk in his office here in the capital of this former Soviet republic. Chernin, the chairman of the Azerbaijan-Israel Friendship Society, says the people of the two countries have a lot in common. “There’s a similar mentality — friendly and open. And Haifa and Baku are even structured the same way, rising up on hills from a bay,” he says. Chernin thinks that the similarities of the two nations will help guarantee the success of the society’s latest project, the Azeri-Israeli Business Forum, which was launched late last month. The group aims to promote greater economic links between Azerbaijan and Israel by providing information and contacts to businesspeople in each country. The project arose because the Israeli Embassy here found itself unable to process the number of requests coming in from Israeli entrepreneurs interested in doing business in Azerbaijan, Israeli diplomat Olga Dolburt said. “Interest in Azerbaijan is increasing, and the embassy can’t handle it,” Dolburt said. To meet the demand, a group of businessmen in Azerbaijan formed the Business Forum under the auspices of the Friendship Society, Chernin said. The two countries have a lot to offer each other, he said. “Azerbaijan is rich in natural resources, and Israel has high technology,” he said. Israel is currently the second largest importer of Azeri oil, according to official statistics, and it also imports Caspian Sea fish from Azerbaijan, Chernin said. But business relations between the two countries could be stronger. This spring, Trend, an Azeri news agency, published an analysis of trade links under the headline “Azerbaijan-Israel Economic Ties: Idle Potential.” Presently, only a handful of Israeli businesses are working in Azerbaijan. Bakcell, one of the country’s two largest mobile phone providers, is part Israeli-owned and managed, but it is a rare example. The Trend article pointed out that Israel accounts for less than 1 percent of Azeri imports. It said greater Israeli investment in Azerbaijan could help the country diversify its economy, which is heavily dependent on petrochemicals. Chernin said the Forum would be happy to help Israel play such a role. Fourteen people attended the Business Forum’s first meeting on July 25, Chernin said. The people represented a number of different sectors, from construction to tourism to aviation to computer technology. They agreed to write analyses of investment opportunities in their respective business sectors and present them for discussion by Aug. 10. All the business leaders who came to the initial meeting were Jews, Chernin said, but the forum is not intended to be for Jews only. “It is open to all, regardless of religion, and I know many Azeri businessmen who want to cooperate with Israel,” he said. Chernin said better economic ties between Azerbaijan and Israel could lead to greater political ties. Baku is part of a pro-American regional bloc that includes Israel and Turkey, he pointed out, but Azerbaijan has still not yet opened an embassy in Israel. “Improvement of business relations will improve the political relationship and will bring political dividends to both countries,” he said. The forum will next begin planning an Azeri business mission to Israel and invite Israeli businesspeople to Azerbaijan. Chernin said he hoped the Azeri mission would visit the Jewish state in late September or early October, after the High Holidays. “There are lots of possibilities in this relationship, and I want to make them into reality,” Chernin said. “Fortunately, I am not alone in this view, in Azerbaijan or in Israel.”