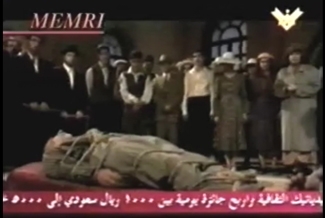 A scene from the anti-Semitic Syrian-made series "Al-Shatat" or "Diaspora," which has aired on Al-Manar, a Hezbollah TV station. (Courtesy of MEMRI)
Advertisement