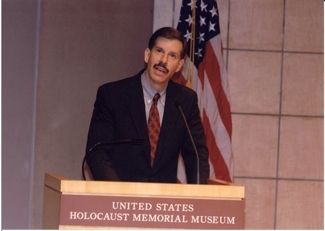 WASHINGTON, Dec. 21 (JTA) — The blunt government instrument that for 25 years has kept former Nazis living in the United States from sleeping soundly, now will come knocking on the doors of those associated with other atrocities. A little-noticed provision in the intelligence overhaul bill signed by President Bush last week mandates the Justice Department’s Office of Special Investigations to seek the deportation of former aliens who were involved in severe human rights violations — an expansion of its 1979 brief, which was limited to those associated with Nazi crimes. The provision adds the words “commission of any act of torture or extrajudicial killing” and “severe violations of religious freedom” to the office’s original mission, which was to target those who “assisted in Nazi persecution or engaged in genocide.” That spells a new lease on life for the OSI, an office that thrilled the Jewish world soon after it was established in 1979 as its army of young — and mostly Jewish — lawyers deported dozens of former Nazis and their allies. “It’s a phenomenal office, it’s done yeoman’s work,” said U.S. Rep. Mark Foley (R-Fla.), who led a bipartisan effort to include the language. “They’re up and ready, and I didn’t want to create new bureaucracy to do something they’re so good at doing.” The OSI has removed 95 people with Nazi pasts from the United States, a record that earns the “highest marks” of any country seeking such deportations, according to Ephraim Zuroff, who heads the Jerusalem office of the Simon Wiesenthal Center, which tracks the prosecution of former Nazis. “They are head and shoulders above any agency,” said Zuroff, who was an OSI staffer in the 1980s. He especially praised the OSI’s longtime director, Eli Rosenbaum. Rosenbaum was unavailable for comment. The agency’s greatest legacy, Zuroff said, was in overcoming widespread skepticism that it would be possible to present admissible proof of complicity in Nazi crimes decades after the fact. Even though the OSI confined itself to deportation cases, its successes have had an impact in actual prosecutions overseas. “The trials are similar, the facts proven are similar,” Zuroff said. “The OSI deserves a tremendous debt of gratitude to those who think it’s important to hold Nazi war criminals accountable for their crimes.” The agency likes to quote a 1980 story in U.S. News & World Report that predicted it would succeed in only “several” cases. Its actions largely are the result of research by a staff where 10 historians outnumber eight lawyers, and that is not as reliant on tips as is commonly believed. Staffers scour yellowing documents searching for hints; a surge of prosecutions in the mid-1990s resulted from the opening of archives in post-Communist Eastern Europe. Still, in recent years it looked as if the OSI would outlive its purpose. In 2004 there have been only two removal actions initiated, following a burst of activity in the previous two years, when the office initiated 15 such actions. The new language in the bill changes that. Foley said that, if necessary, he would fight to expand the OSI’s current $5 million budget. “If they need money, I’ll be the first to try and provide it,” he said. Foley, who has fought for the expansion since 1999, said there was a need for the new language: Existing law was silent on deporting human rights violators. In his own south Florida constituency, he says, Haitians must live with a former police torturer, and a Cuban national police torturer now works unfettered in a nursing home. “The Statue of Liberty says, ‘Give me your tired, huddled masses yearning to be free,’ ” he said. “It doesn’t say, ‘Send those who made you huddle.’ ” Legislators who fought for the changes said that expanding the office’s brief was a natural choice for a government that has made democratic reform overseas a centerpiece of its foreign policy. Rep. Gary Ackerman (D-N.Y.), who joined Foley in leading efforts in the U.S. House of Representatives to add the language, argued before last week’s vote that some people facing trial in Iraq on war crimes charges might enjoy freedom here if they could slip through U.S. borders. “Some of Saddam Hussein’s most brutal thugs, if they were able to hide their past and slip past the INS, they could conceivably apply and receive either U.S. permanent resident status or even possibly citizenship,” Ackerman said. “The U.S. Code provides no — again, no — assurance that Saddam Hussein’s henchmen, Iraqi war criminals, perpetrators of torture or atrocities from there or other places could not somehow come into the United States and enjoy the very benefits that they have so cruelly deprived others” of having, Ackerman said.