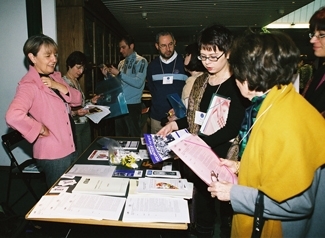 KRAKOW, Poland, Dec. 23 (JTA) — After the dual destructions wrought by the Holocaust and communism, Eastern European Jewish communal life was little more than a memory 15 years ago. But last week in Krakow, Poland, the region’s Jewish community got a shot in the arm as Jewish volunteers and professionals gathered for the first pan-European conference for Jewish community volunteers. The conference brought together 70 participants from 11 countries in Eastern and Western Europe, the United States and Israel. Co-sponsored by the American Jewish Joint Distribution Committee, the European Council of Jewish Communities and the Polish Social Welfare Commission, the conference, known as the Volunteer International Program, is the first of its kind, uniting community members from developed and developing countries to share ideas for Jewish communal service. “Everyone will learn best practices and learn how different volunteer programs work in different communities,” said Daniel Sherman, who works for the JDC in New York The mid-December conference offered professionals and volunteers from each country the opportunity to present information about their own volunteer programs, which include work with the elderly, poor and children. It included workshops on innovative volunteer programs, training and ideas for strengthening youth participation in volunteerism. For many Eastern European Jews, the conference was the first opportunity to share ideas with others in similar situations who have more developed programs. “After communism, people are still searching for their identities, thinking, ‘What does it mean to be a Jew?’ ” said Zoltan Haberman, director of social services for the Hungarian Jewish Social Support Foundation. “Helping is a Jewish value,” and through volunteerism “they can define themselves by doing something.” Hungary today has approximately 100,000 Jews, but few are affiliated with the official Jewish community. About 80 percent of Hungary’s Jewish community lives in the capital, Budapest. The community has 22 synagogues, a mikvah, cemeteries, kosher kitchens and a Jewish hospital. “In Eastern Europe, there are Jewish people but not really a strong community,” Taly Shaul, Haberman’s colleague, told JTA. “The main challenge today is to bring as many people as possible back to Jewish life. People should learn community isn’t only a place to get, but to contribute as well.” Jessica Chait is an American Jew living in Poland and working as a volunteer. The recipient of the Rosalyn Z. Wolf Fellowship, a grant from the Jewish Community Federation of Cleveland, she helped coordinate the conference from Warsaw. She said some participants had very developed volunteer corps in their communities, while others were just getting started. “This was a real exchange. All the members learned from each other,” she said. Among the American participants in the conference was Dorot, a New York-based organization working to enhance the lives of Jewish and other elderly through home visits, “university without walls,” an educational program for homebound seniors and other volunteer programs. Dorot, which has been operating for 29 years, has a volunteer base of some 10,000 people. Vivian Fenster Ehrlich, Dorot’s executive director, said the organization serves everyone from non-Jews to secular Jews to the Orthodox, but that plenty of unaffiliated Jews volunteer in order to do a good deed. “The interaction with the European communities has been fabulous,” Fenster Ehrlich said. “I’ve seen everything here from grassroots” programs to programs “that are 100 years old. Everyone struggles with how to involve young people.” Kasia Zarnecka, volunteer program coordinator for the Warsaw-based Jewish Welfare Commission and one of the organizers of the conference, said Jewish communal work both in emerging and well-established communities is challenging but rewarding. “We all have common goals and share the same motivations,” Zarnecka said. “It’s always best to have a dialogue.”