People and trees need each other 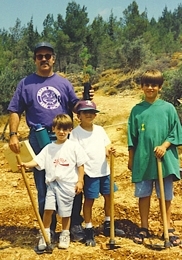 Larry Ulman plants trees in Israel during a 1994 family trip, with, from left, sons Jeremy, Gabe and Zack. (Courtesy of Jane Ulman)
Advertisement

ENCINO, Calif., Jan. 12 (JTA) — Tu B’Shevat, the 15th day of the month of Shevat, marks the birthday of the trees. Will the trees be taken out to dinner, to the Inn of the Seventh Ray in Topanga, Calif., to feast on vegan duck and passion fruit sorbet? Will they receive a digital camera, a copy of Carl Hiaasen’s newest novel and a “Life is Good” T-shirt? And will the trees be treated to a rousing but off-key rendition of “Happy Birthday To You” before blowing out the candles on a home-baked and decorated chocolate-chip cookie cake? “Trees don’t eat chocolate-chip cookie cake,” Danny, 13, says. “No, but your dad does,” I answer. And how convenient, for this year Tu B’Shevat, which falls on Jan. 25, also marks my husband Larry’s birthday. Yes, this year we will sing “Happy Birthday” to Larry and to the trees. And this double celebration makes us even more cognizant of the vital interconnectedness of humans and our deciduous and coniferous cohorts. “We literally can’t live without trees. They give off oxygen,” Gabe, 17, says. One acre of forest, in fact, according to the U.S. Department of Agriculture, puts out four tons of oxygen, enough to keep 18 people breathing for one year. Trees also give us food and provide materials to build shelters. They serve as windbreaks and prevent erosion. Additionally, they give us beauty, serenity and shade, and they harbor wildlife. And trees save lives. Just look at the people who were rescued by trees in the tsunami, desperately clinging to them to avoid being swept out to sea. Or found days after the catastrophe, afloat in a tangle of tree limbs. But while trees have always been important in Judaism, they don’t exist solely for our sake. In fact, God created trees and other vegetation on the third day, before either animals and human beings. Genesis 1:11 says, “Let the earth spout vegetation: seed-bearing plants, fruit trees of every kind of earth that bear fruit with the seed in it.” And these fruit-bearing trees are so important that they cannot be destroyed, even in times of war. Deuteronomy 20:19 says, “When in your war against a city you have to besiege it a long time in order to capture it, you must not destroy the trees, wielding the ax against them.” Additionally, Leviticus 19:23 warns, “When you enter the land and plant any tree for food, you shall regard its fruit as forbidden. Three years it shall be forbidden to you, not to be eaten.” But trees and humans have not always treated one another kindly. Trees have been known to cause massive destruction. In the United States, over the last eight years, more than 4 million acres annually, on average, have been ravaged by wild fires, according to the National Climatic Data Center, causing death, flooding and massive erosion. And people have died skiing or careening off a highway smack into trees. Or been crushed by falling trees. “It’s the benign indifference of nature,” says Gabe. “We learned about that in Jewish studies.” But there’s also the less benign indifference of man, who began razing forests to make way for farmland in southwestern Asia as far back as 10,000 years ago, according to Michael Williams, author of “Deforesting the Earth.” But since World War II, the situation has worsened, with an average of 15 million hectares, or over 37 million acres, deforested annually since 1980. But the truth is, trees and people need each other. And we need to find a balance between preserving and protecting nature, which ultimately belongs to God and not to man, and using natural resources to sustain life, which in Judaism always takes precedence. And Tu B’Shevat, which has evolved into a kind of Jewish Earth Day, gives us the opportunity to reflect on this mutual dependence, teaching us that humans and trees have more in common than not. “They both grow,” says Danny. “They both need water, food, air and sunshine,” says Jeremy, 15. And, perhaps most important, they both have roots. The tree roots, which can extend two to three times the diameter of the leaf canopy, absorb essential water and nutrients from the soil and transport them to the tree. They serve as a storehouse in winter, and most crucially, they hold the tree in its place. Severed or diseased roots often mean arboreal death. The human roots, while intangible, are no less important. They take us Jews back almost 4,000 years to Abraham and Sarah and also connect us to future generations. They anchor us with weekly celebrations of Shabbat, yearly observances of holidays and festivals and a lifelong progression of ceremonies from birth to death, all the while securing us in a value system that sustains us spiritually and intellectually. As ecologist and educator Michael Caduto says, “There has to be a rootedness for our lives to flourish.” And the lives of the trees. And so, on Jan. 25, we’ll sing “Happy Birthday” to both Larry and the trees, celebrating our interconnectedness and sharing our similarities. But you won’t catch us sharing our chocolate-chip cookie cake. (Jane Ulman is a freelance writer in Encino, Calif. She is the mother of four sons.)