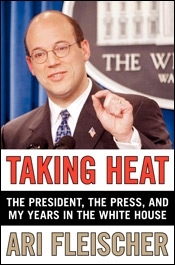 WASHINGTON, March 1 (JTA) — Ari Fleischer remembers being advised by a former White House press secretary that despite the demands of the job, he should stop and smell the roses. He recalled that advice as he toured the Auschwitz concentration camp with President Bush and the first lady in 2003. There were not any roses, but there was plenty to fill the senses. “I stood there, as an aide and as a Jew, watching the President of the United States visit the spot where my people were almost exterminated,” Fleischer writes in his new book, “Taking Heat.” “I wondered what my relatives whom I never met would think if they knew I had returned to the place of their death as an aide to the President — a president who had emerged as Israel’s best friend ever in the Oval Office, a president who had profound warmth and respect for the Jewish people,” writes Fleischer. In the book, which was released by William Morrow on Tuesday, Fleischer details his impressions of watching Bush meet with Israeli Prime Minister Ariel Sharon and other Middle Eastern leaders on the Israeli-Palestinian conflict, and of Bush’s decision to isolate the late Palestinian Authority President Yasser Arafat. “His belief that a better Palestinian leader could emerge if only the environment would change was rooted in his abiding faith in freedom,” Fleischer said. “Arafat and his immediate, corrupt circle were the real problems, Bush thought — not the Palestinian people and not Ariel Sharon.” Fleischer, who stepped down from his post before Bush’s first term ended, mostly focuses on his relationship with the media and his theses that the media enjoy conflict and are more hostile to conservative than liberal administrations. While several former Bush White House officials have written scathing accounts of the administration, Fleischer’s book is primarily a positive reflection on the president and the administration’s actions over the last four years. Fleischer writes at length about the terrorist attacks on the United States on Sept. 11, 2001, and about the ensuing days. He writes that he sought permission from his rabbi to work on Rosh Hashanah a week later, and wanted to tell the White House press corps that he attended services that morning. “Working on a High Holy Day sent a terrible signal to fellow Jews, and I was uncomfortable,” he writes. But his staff “told me it would be better if I left it alone. Don’t bring religion into the briefing room, I was advised. I agreed.” However, when specifically asked about a meeting that had occurred earlier in the day, Fleischer did say he had been at a synagogue. Fleischer mentions some of the mistakes he made in office, including his suggestion, during a briefing in February 2002, that President Clinton was to blame for exacerbating violence in the Middle East. He told reporters that the Clinton administration had tried to “shoot the moon and get nothing.” Fleischer apologized for the statement later in the day. There is little new information in the book. However, Fleischer does say Bush was concerned about the rise of anti-Semitism in Europe, and hoped the media would make a bigger deal of his remarks denouncing anti-Semitic acts. Fleischer does not say much about his Jewish upbringing and does not address his decision to marry a non-Jewish woman, which surprised some in the Washington Jewish community. After leaving the White House, Fleischer joined the board of directors of the Republican Jewish Coalition. He works as a communications consultant and does a lot of public speaking, including to many Jewish groups.