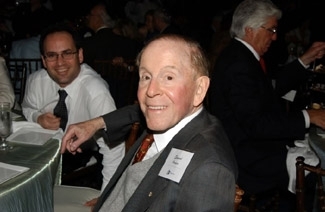 OTTAWA, Canada, April 5 (JTA) — Edward Bronfman, the publicity-shy businessman who died Monday at 77, was not only one of Canada’s most successful moguls but also one of the country’s leading philanthropists. Bronfman was born into a family whose name long has been synonymous with great wealth and business success in Canada. Descendants of a Russian immigrant tobacco farmer, Ekiel Bronfman, members of the Bronfman family own and control huge financial empires that grew out of the profits of the family liquor business, which boomed from 1920 to 1933, the Prohibition era in the United States. Edward Bronfman’s father, Allan, was the brother of Samuel Bronfman, the founder of the Seagram liquor company, which over the decades grew into one of the world’s largest distilling firms. In the 1960s, however, Edward Bronfman and his brother Peter were forced out of Seagram by their uncle, Samuel, and their cousins, Charles and Edgar, to whom they sold their shares of the company after a nasty public feud. Subsequently, the brothers built up their own business empire through the holding company Edper — a combination of their names, Edward and Peter — which at its peak was worth an estimated $100 billion and controlled a dizzying array of companies, including the brewer Labatt, the insurance broker London Life, the real estate company Royal LePage and the mining giant Noranda. In 1987, Edper indirectly controlled Canada’s largest forestry company and largest trust company, and in 1992 accounted for 10 percent of the Toronto Stock Exchange’s value. The brothers also owned the Montreal Canadiens hockey club between 1971 and 1978, a period in which the team won the coveted Stanley Cup four times. Bronfman also helped Israel’s own nascent hockey scene through his support for the building of the Canada Centre, a recreation complex in Metulla, in northern Israel, that boasts an the country’s only Olympic-sized ice rink. The brothers divested themselves of their Edper interests in 1995, and Edward Bronfman became president of Maured Ltd and a director of Ranger Oil Ltd and Astral Communications Inc. Clearly not fulfilled with the enormous success of his business ventures, from the late 1980s Bronfman increasingly turned his attention to philanthropy. He took an active role in many national organizations and was a generous benefactor to several educational, cultural and health-care institutions in Montreal and Toronto. He was a director of the Canadian Council of Christians and Jews and the Canadian Council for Native Business. He also founded the Edward Bronfman Family Foundation, which built the Research Clinic in Secondary Progressive Multiple Sclerosis at Toronto’s Mount Sinai Hospital. In 2000, he was awarded the Order of Canada in recognition of his wide-ranging philanthropic work. His philanthropy included the Jewish community as well. “My father and mother, Alan and Lucy, were highly involved in the community in Montreal. From the Jewish General Hospital, which my father helped found in 1934, to Israel Bonds and Hebrew University, my parents were deeply committed to Jewish — and non-Jewish causes. Giving came naturally to me — for which I am fortunate and deeply grateful,” he said in a testimonial to the Jewish Foundation of Greater Toronto. “Our family is committed to the philanthropic tradition my parents handed down to me. We hope to provide to our children, and their children, a testament to our family values. We want to contribute to this diverse, exciting and growing population well into the future. We hope this will ensure continuity and support Jewish culture in the place that is their home.” Bernie Farber, the head of the Canadian Jewish Congress, told the Canadian Press wire service that Bronfman was one of the Jewish community’s most cherished philanthropists. “I’ve known Edward a long time,” Farber said. “He was down-to-earth, kind, gentle. Although he was clearly a man of great means, he was just one of the people. He was just a really fine, fine human being. It’s a great loss.”