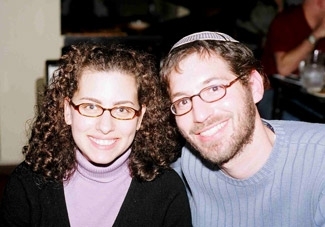 JERUSALEM, April 10 (JTA) — During my first visit to Israel when I was 24, fantasies of aliyah and Israeli women captured my imagination. I pictured myself waking up every day to the tangerine Jerusalem sun in a narrow Nachla’ot apartment that overlooked the city. Then I imagined falling in love with one of those loud, rosy-cheeked, Teva-sandal-and-flowing-skirt- wearing Israeli girls with wild curly hair and big dusty backpacks. I knew I would find myself back in Jerusalem. But marrying a native Israeli, speaking only Hebrew together and building a home removed from the Western Anglo community and culture where I lived my whole life somehow seemed unrealistic. Inherently I knew I would end up marrying a woman with a similar world view. But only recently, after becoming engaged to an idealistic high-school English teacher named Dena Stein, do I realize how our similarities, the big ones as well as the seemingly minute ones, make all the difference. Coincidentally, we both grew up in Pittsburgh. I lived there until I was 12, and Dena lived there until she left for college in Michigan. We both enjoyed a middle-class American suburban-type lifestyle: a four-bedroom house, two cars, a backyard lawn and cable television. We both are the eldest of two kids, and each of us has a younger sister. Our parents are connected but secular Jews, who consider Israel important but not a potential home. And during our young adulthoods, we both pursued a more serious relationship with Judaism, and through our travels discovered a deep love for Israel. This past summer Dena returned to Israel, and subsequently met me, after finishing her first year teaching English in a Philadelphia high school. After a four-year hiatus from Israel, she had to return to ask herself a question that she could not avoid: Despite all the challenges, can I really imagine myself not living in Israel? As we walked along the beach boardwalk in Jaffa, it seemed that our shared vision of building a home in the Judean Hills charged the salty air between us. It was those two points, religion and Israel, that I assumed were the magnets that drew our futures together. But looking back on our magical summer, our complaints about the small struggles in Israeli culture — like having to push people in the bakery line to place an order — allowed us to forge an even deeper connection. Just as important as the fact that we were looking ahead in the same direction, the fact that we stood on a common cultural foundation was an integral factor in our bonding. One of my rabbis used to tell American guys in Israel that they should date within the Anglo community. “There are going to be enough differences between the two of you just simply because you are a man and she is a woman. Therefore it’s best to have as much in common from the start as possible” the rabbi would say. Among my Anglo friends in Israel, all but one married other Anglos. Even my friend Nati, who made aliyah from South Africa with his parents when he was 12 and went through Israeli schools and the army, still married Michelle from Ohio, who came to study for a year at Hebrew University and never left. Even Nati, who identifies as Israeli and not South African, admitted that he still needed that comfortable cultural viewpoint that only another Anglo could provide. “Coming from South Africa, there’s just a general outlook that is very different than Israel. It has to do with being more open-minded, the way you treat other people and cultural norms. You have to have that sense of familiarity in order to feel at home,” he said. “Plus, Israelis don’t like Burgers Bar as much,” Nati added, noting the affection that Anglos have for this Israeli hamburger chain. I too am finding that the connection Dena and I share lies in the small details. Yes, we love to ponder the poetry of Milton as well as Israeli politics and the Torah portion of the week. But we also can console one another when we receive bad customer service at a supermarket, because we grew up expecting a certain standard. These small similarities and cultural values ingrained in our personalities are as important as the big dreams. Those big dreams are important too, because they’re the visions we’ll be following after our wedding and Dena’s aliyah this summer. We share the dream of a beautiful young woman in a flowing skirt and wild curls, but she’s the vision of the daughter we hope to have. And in a culture that always will be somewhat unfamiliar, all the cultural references and American slang that pepper our speech will provide a sense of comfort and safety.