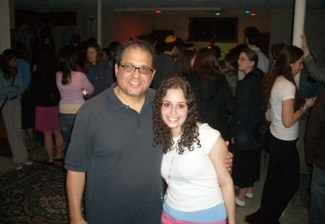 Laura Krule and her father, Larry, stand in the basement of their Teaneck, N.J., house as the fund-raising concert goes on around them on April 8. (Courtesy of Laura Krule)
Advertisement

NEW YORK, April 12 (JTA) — When disaster recently struck a Teaneck, N.J., family, many within and without the family’s tight-knit Jewish community agonized: They desperately wanted to help but felt helpless. One teenager had an idea of what she could do. Laura Krule, 17, organized a concert in her parents’ basement — and on Saturday night, 350 people, a mix of teenagers and adults, came to listen to six yeshiva bands. The concert raised about $6,000, which will go to help the family. In late March, the family, headed by Philyss Seidenfeld, a divorced mother of seven, was decimated by a fire that demolished their house. Four children died: Ari, 15; Noah, 6; Adira, 5; and Natan, 4. Two other children — Zahava, 14, and Aviva, 7 — survived, rescued by a neighbor who climbed a ladder and pulled them out of a top-floor window. The oldest daughter — Helena, 17 — was studying in Israel. Philyss Seidenfeld is hospitalized in critical but stable condition; her surviving daughters are back in school. The fire department had been called to the house earlier that evening. After spending a half-hour investigating the source of a burning smell, the firemen left, confident that nothing was wrong. What the fire department didn’t know was that the building’s wiring was overloaded. In the middle of the night a fire erupted, rushing up the empty space between the old building’s inner and outer walls. When it came out of its initial shock, the community rallied to help the survivors. Teaneck’s Jews are mostly modern Orthodox and support a flourishing Jewish infrastructure, with schools, shuls, restaurants and book and Judaica stores. They prayed together, and marked the day before the new month began as a time of mourning. They also gave money to help the survivors re-establish their lives. Laura, a junior at Ramaz, an Orthodox day school in Manhattan, already has shown herself to be an impresario and philanthropist. In December she organized her first concert, also featuring yeshiva bands; the proceeds went to the Koby Mandell Foundation, set up in memory of a 13-year-old Israeli-American boy beaten to death by a Palestinian mob in the West Bank in 2001. This concert, Laura decided, would benefit people closer to home. “A lot of people felt helpless, so it’s nice that I have a way of helping. I can use my strengths to help others,” Laura said. “And people appreciate what I’m doing.” Yeshiva students from across the metropolitan area performed. One band was composed of ninth-graders who were in school with Ari, the eldest victim. “They were really cute,” Laura said of the band, which kicked off the evening. “And then tons of people just kept coming in,” she said. “I didn’t recognize half of them. And they kept on coming up to me and thanking me. It felt so nice! And knowing that we were raising so much money for the family — I just felt so happy,” she said. Larry Krule is proud of his daughter, but not surprised. “I would like to think that my wife and I have shown, by word and deed, that it’s the right thing to do,” he said. “The right thing, the Jewish thing, the moral thing. It’s a kind of cosmic giveback, a return of blessings.” Krule himself began doing charitable work when he was a teenager in Chicago. Today he’s a portfolio manager in a private equity firm but he’s also the president of the Jewish Book Council and founder and chair of Davar, a prayer and study group. He was able to advise his daughter as she organized the concert, but he didn’t actively help her. “I just spotted her, like a person watching a gymnast,” he said, talking about the first concert she’d put together. “She did it all herself. “It was a fun, cool, successful benefit, and it did good for someone else,” Krule concluded. “We feel major nachas.”