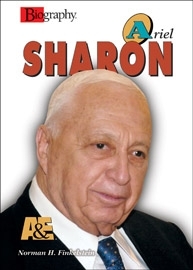 BOSTON, May 5 (JTA) — A new biography of Ariel Sharon that is geared for young adults couldn’t have come at a better time. As the Israeli prime minister, as controversial now as ever, takes very public actions in the Middle East, Norman H. Finkelstein’s book provides readers with useful background information on Sharon. The book describes Sharon’s life and sheds light on the complexities of the efforts now underway to achieve peace among Israel, the Palestinians and their neighbors. Finkelstein, who has written many non-fiction books for children, including one about Zionist leader Theodor Herzl, has won the National Jewish Book Award twice — and he is not the Norman G. Finkelstein who is accused of being a Holocaust denier. Recently, during a break from his day job as a school librarian, Finkelstein talked about the Israeli prime minister. “There is no middle ground with Ariel Sharon,” Finkelstein said. “People either think he’s the greatest thing since King David or they think he’s a dangerous bum.” Sharon’s biography is inseparable from the history of the State of Israel, Finkelstein said, and he weaves the two together in the book, giving the historical context for Sharon’s rise through the military and his move into politics. Finkelstein’s story begins in April 1948, when Sharon was a 20-year-old Israeli military platoon leader. Sharon’s name then was Ariel Scheinerman, and he was known as Arik. The scene is a fierce battle on the plains of Latrun during the Israeli war for independence. After a time, Sharon’s unit found itself fighting alone. A soldier asks how the leader is going to get them out. ” ‘Look,’ ” Finkelstein quotes Sharon as saying, ” ‘I’ve gotten you out of a lot of tight places before. I’ll get you out of this too. Just get back and do what I told you.’ ” But in the end, the badly wounded Sharon was forced to retreat, leaving behind severely wounded soldiers. Many in his platoon died or were seriously injured. It was a bitter and defining moment for Sharon, Finkelstein writes. Finkelstein said he chose to open the book with that scene in part because it’s dramatic, and would draw in young readers. “It’s military, it’s a battle, there’s danger,” he said. But there’s more. “That chapter gives you a good definition of who Sharon is: a leader, embattled, unafraid, an example to people in his unit.” It also gives the reader a feel for the dangers Israel faced during the war, he added. The story of how Sharon courted his first wife, who died tragically when she was young, is the one Finkelstein says he likes best, because it illustrates Sharon’s personality. “He sees this pretty girl and he cuts through a fence” between his yard and her school “to get to the other side,” he said. “That’s who he is. Direct.” Sharon was born in a small, dusty farming settlement in Palestine to Russian immigrant parents on Feb. 27, 1928. “He grew up in Israel’s wild west, in an odd family, almost like people who couldn’t get along with their neighbors,” Finkelstein said. Sharon later said that leaving the little settlement to go to school in Tel Aviv changed his life, Finkelstein said. Sharon’s rise as a military and political figure was far from meteoric. “He’s always had trouble following orders,” Finkelstein said. “It got him into all kinds of trouble. “On the other hand, his commanding officers always saw in him a spark, this initiative that out in the field was invaluable in terms of taking advantage of a bad situation and turning it to his own positive benefit.” Finkelstein shows those characteristics at work as he describes Sharon’s role in the 1973 Yom Kippur War. Frustrated by what he saw as inaction by the higher-ups, Sharon forged ahead with his own strategy, without getting approval. That led to a decisive military feat — the successful crossing of the Suez Canal, often credited with turning the war in Israel’s favor. Finkelstein pays attention to political and military events for which Sharon has been sharply criticized, including the Lebanese Christian attack on Sabra and Shatila, Palestinian refugee camps in Lebanon. The book reviews Sharon’s controversial policies on building settlements in the Gaza Strip and West Bank and, later, the security fence being built between Israel and the West Bank. Finkelstein’s last update to the book before it went to press was a passage about the death of Palestinian Authority President Yasser Arafat. Finkelstein also writes about Sharon’s personal life. He has faced many tragedies, not least among them the death of his young son in an accident with Sharon’s gun. Sharon finds solace at his 800-acre Sycamore Farm in the northern Negev. “He defines himself always as a man of the soil,” Finkelstein said. Finkelstein describes Sharon as practical and single minded. “He is really an Israeli patriot,” he said. “You may disagree with his politics or his methods. Lots of people do. But in his heart, what drives him is the continuation of the State of Israel.”