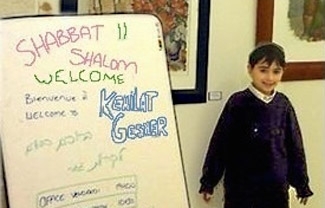 PARIS, Sept. 25 (JTA) — Where in the world can you find a synagogue whose members are not necessarily Jewish; that holds services in English, French, and Hebrew; where Americans bless the State of France and where ruach, or spirit, knows no linguistic boundaries? At Kehilat Gesher, which since 1993 has been an oasis for English-speaking Jews in Paris. An egalitarian synagogue with a name taken from the Hebrew words for “community” and “bridge,” Kehilat Gesher prides itself on “bridging the gap” between cultures — French and Anglophone, Sephardi and Ashkenazi, modern and traditional. One might add “visitor and native” to the list as well, as Kehilat Gesher welcomes Jewish tourists passing through Paris to celebrate Shabbat as if they were at home. Kehilat Gesher began in 1992, when several Jewish families who had been meeting in apartments to observe Shabbat and other holidays decided that Paris, which has a church that is a major fixture in American expatriate life, should also have a place for American and Anglophone Jews to congregate. “We started out with mainly mixed marriages,” explains the founding rabbi, Tom Cohen, or “Reb Tom” as he is known in the community. “Jewish-American women married to non-Jewish Frenchmen, who were having children and wanted to bring Judaism into their family life.” Nowadays the congregation consists of more than 140 families of all types — Anglophone, French and an increasingly international membership. “It’s even become, to a certain extent, the corner synagogue,” Reb Tom said. “It’s just the closest one in the neighborhood.” Originally founded in the Paris suburb of Saint-Germain-en-Laye, the congregation expanded to the city’s Seventeenth District two years ago. Betsy Matheny, one of the founding members of the congregation, explains, “We were split geographically from the start.” She says she was part of a group that had children in an English-language Talmud Torah class in Paris but “we all lived in the suburbs and wanted to create something closer to home, so we didn’t have to shlep to Paris all the time. But then we realized there were a lot of English-speaking Jews in Paris who didn’t want to shlep to the suburbs, so we realized we had to do something for them, too.” Kehilat Gesher seeks to appeal to French Jews as well — both those who have spent time in the United States and those who are contemplating alternate ways of being Jewish. Bernard Hass, the president of the synagogue, who was raised and celebrated his bar mitzvah in Orthodox-dominated France, says that his marriage to an American Jew, Shirley Fishbein-Hass, opened his eyes to other ways of being Jewish. The congregation is so inclusive that some members “aren’t even Jewish,” Matheny says. “When we founded Kehilat Gesher, we obviously got to write our own statutes — so we said that non-Jews could be members.” This is a positive change from the synagogues that some families left behind in the United States, explains board member Shirley Fishbein-Hass. “If the wife is Jewish and the husband isn’t, you end up with the husband being excluded from membership. Here, the entire family can join.” Cohen relates an anecdote regarding a bar mitzvah he performed in which the young man was the only Jew in the family — the mother was from a mixed marriage, and the father was French and not Jewish. “All three were converting, but the bar mitzvah boy was the only officially Jewish one by the time the day came around.” Originally from Portland, Ore., the rabbi met his wife, a French rabbi with her own congregation in Paris, while at yeshiva in Israel. A Conservative-trained rabbi who studied at the University of Judaism and was ordained at the Jewish Theological Seminary in New York, the flagship institution of the Conservative movement, Cohen sees his role as that of a facilitator — ensuring that his congregation is making choices from an informed place. “I’m not a flag planter,” he says. “I want the community to be open to Reform and Conservative Jews. We’re transdenominational. We want to create a community where people from different perspectives can feel at home and learn from each other.” It’s a goal that appeals to many expatriate Jews in Paris, who can feel triply marginalized — as Americans in France, as Jews in a Catholic country, and as Ashkenazim in a country where the majority of Jews are Sephardim. “And it allows children of interfaith marriages to develop a sense of their Jewish identity,” Matheny adds. Having Jews from so many backgrounds forces the synagogue to address a variety of expectations. “There are certain things we won’t compromise on,” Fishbein-Hass says. “Egalitarianism, for one. But other than that, we’re open to discussion. Tom has integrated certain Sephardi melodies into services, for instance.” On the High Holidays, Cohen says, “It’s interesting to see which parts of the service really get which parts of the congregation going.” Kol Nidre, he says, is the pinnacle of the Yom Kippur service for the Ashkenazim —”It’s all about Ashkenazi guilt and neurosis. One last prayer before God closes the gate!” — while the Sephardim love the Ne’ilah “because then they can now go out and party and celebrate the joy of Judaism.” Because the liberal movement of Judaism is not recognized by the Consistoire, the umbrella organization of religious Jewish groups in France, Kehilat Gesher, along with other liberal synagogues in France, does not receive government funds to operate, as Orthodox synagogues do. Kehilat Gesher has established an organization to encourage donations from American Jews. KG USA also coordinates exchange programs with American synagogues. The sense of community is particularly important to the youth-group sector of the synagogue — the post-b’nai/b’not mitzvahs, who are a tight group, the rabbi says, explaining that they suffer the most from the “Franco-American Jew in France” identity crisis. “Wherever they go in the world, we want them to feel comfortable walking into a shul.” And they’ll be able to daven, or pray, in at least three languages.