Totaling the damage from Katrina 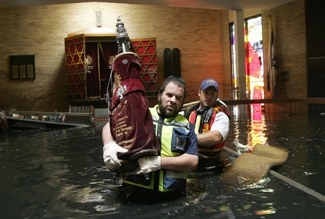 Isaac Leider, a volunteer from ZAKA, carries a Torah out of the flooded Beth Israel synagogue in New Orleans on Sept. 13. (Menahem Kahana/AFP/Getty Images)
Advertisement