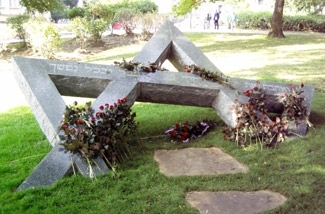 This monument, partly funded by the Czech town of Usti nad Labem, commemorates the more than 1,000 Jews from the town killed in the Holocaust. (Courtesy of Usti nad Labem town hall)
Advertisement

PRAGUE, Oct. 11 (JTA) — The Czech Republic has many Holocaust memorials, but perhaps none are as loaded with symbolism, or signify so much about Czech-German-Jewish relations of the 20th century, as a new, monumental Star of David. The memorial was unveiled Sunday in Usti nad Labem’s town park, where a Jewish cemetery stood before World War II, by Mayor Petr Gandalovic and Bedrich Heller, chairman of the town’s Jewish community. “This memorial is the last part of a jigsaw puzzle that the town is putting together on its past, and the mayor is unique in confronting that past,” said Tomas Kraus, executive director of the Federation of Jewish Communities in the Czech Republic. He was referring to Gandalovic’s efforts to mark the 60th anniversary of the end of World War II, a controversial issue in a town that saw massacres of innocent victims among its three groups of inhabitants — Jews as well as other Czechs and Germans. The Memorial to the Holocaust Victims, by Czech sculptor Michal Gabriel, is a six-pointed star partly submerged in the ground. It commemorates the more than 1,000 Jews from Usti killed in the Holocaust. “It is one of the most powerful memorials we have because, whether intentionally or not, the Star of David half-submerged in the ground suggests that the Jews are rising up and sinking simultaneously, an apt metaphor for their history here,” Kraus said. Gandalovic pointed out that the Jewish community that lived in Usti from the 1860s until 1938 contributed greatly to its industrial, commercial and cultural development. He pointed to Eduard Jakob Weinmann and Ignaz Petschek, thanks to whom Usti became an important European center of trade in coal, and even had its own stock exchange in the second half of the 19th century. Other Jews, particularly doctors and artists, also contributed to the development of the town, Gandalovic said. “The town was 90 percent German before the war, and it was a mere provincial place until its German industrialists, almost all of whom were Jewish, made it one of the most thriving business centers in Central Europe in the 1920s,” Kraus said. Vladimir Kaiser, head of the Usti Town Archive, said that some 1,250 Jews lived there before World War II. According to a postwar list compiled by local Jewish businessman Leo Pick, only 195 of them survived, Kaiser said. It’s thought that nearly all the survivors emigrated after the war. On New Year’s Eve 1938, the Nazis burned a town synagogue, which they later turned into a smoked-food manufacturing plant. In the 1950s, the Jewish part of the central cemetery was completely destroyed, Gandalovic said. The unveiling ceremony was attended by hundreds of local residents; Artur Avnon, Israel’s ambassador to the Czech Republic; and representatives from European countries. There also were several Holocaust survivors among the participants. They did not make speeches, but put flowers on the memorial. “I thought about my mother, father and a younger sister,” Auschwitz survivor Ruzena Duchkova (Kleinova), 77, said after she put a rose on the star. “They did not return from Oswiecim,” she said with tears in her eyes, using the Polish name for Auschwitz. The memorial cost more than $30,000, with the town paying one-fifth of the sum and the Jewish community the rest. Discussions on the project began as far back as 1995, but neither the Jewish community nor the town had money for it until now. Gandalovic is viewed by many as a key proponent of the project. He also is the first Czech mayor to pay tribute to the town’s German population, which was expelled, often brutally, in 1945-46. Gandalovic erected a controversial memorial this year to Germans killed in a massacre by vengeful Czechs. Gandalovic also inaugurated a memorial this year to those who died during the Allied bombing of Usti, which destroyed most of the town. The Holocaust memorial concluded a weekend conference in which Czech and German scholars debated the contribution of Germans to the town, an unheard-of event in a country where under Communist rule any mention of a positive German influence on Czechoslovakia was considered traitorous. Usti today is home to about 50 Jews. Some of them are descendants of Jews who survived the Holocaust because they had married Gentiles, keeping them from being sent to concentration camps. Others hail from the Carpathian Mountains in what is now Ukraine, but which was Czech before the war.