Families strike back at terror 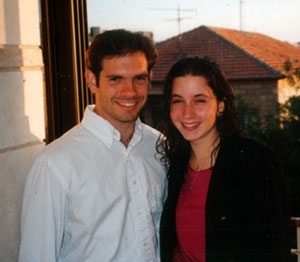 Matt Eisenfeld and Sara Duker, killed by a Hamas terrorist in a 1996 attack in Jerusalem. (Courtesy of Eisenfeld family)
Advertisement

NEW YORK, March 16 (JTA) — Matt Eisenfeld would have been 35 by now; his fiancee, Sara Duker, 32. He might have been a rabbi; she an environmental researcher. There are lots of things Matt and Sara could have been — but a suicide bombing in Jerusalem cut short their lives 10 years ago. That incident also left the young couple’s parents, Leonard and Vicki Eisenfeld and Arline Duker, grasping for answers. The families have joined a growing number of individuals seeking legal retribution against the perpetrators of terrorist acts. For the plaintiffs, this means going into the lion’s den — confronting terrorist organizations head on. The Eisenfeld and Duker families soon learned that the mastermind behind the murder of their children was a Hamas terrorist trained and recruited by Iran. That evidence allowed Washington-based lawyer Steve Perles, who has represented roughly 350 victims of terrorism, to build a case against the Islamic Republic of Iran. “In the world of terrorism, it’s the policy of the overarching owner that’s responsible,” Perles said. “This really puts Iran right at the epicenter of Hamas terrorism.” Vicki Eisenfeld agreed. “Iran was the diabolical parent of this,” she said. “You can’t kill someone and not expect to have repercussions.” The families hope their court case can help create financial disincentives for terrorism. “Iran’s economy is more fragile than you think,” Leonard Eisenfeld said. “If you shut off opportunities to invest in Europe, it creates economic disruption.” To some degree, their efforts have yielded success: The families have received $27 million in compensatory damages, funneled from appropriated taxpayer funds in the U.S. Treasury. But the case has encountered other bureaucratic snags, especially from officials in the U.S. State Department. Perles described the government’s reticence as surprising, considering the administration’s strong anti-terrorism stance. “It is very schizophrenic and I don’t begin to understand it,” he said. “They consider what we’re doing inconsistent with their turf.” A State Department official said it’s a question of policy, not turf wars. “The State Department has taken the position that to make payments like this is unfair and inequitable in a general manner,” the official said. “We have to look at policy in a much more general way, not vis-a-vis individual constituents or individual plaintiffs. “There are a lot of victims out there,” the official continued. “But we serve the U.S. government and the U.S. taxpayer. We cannot say, ‘Oh, these people are more deserving than these people.’ ” The obstacles have prevented the Eisenfeld and Duker families from cashing in on the $300 million in punitive damages they were awarded. But this scenario is not unusual: After New Jersey native Alisa Flatow was killed by terrorists in the Gaza Strip in 1994, her father, Stephen Flatow, received $22.5 million in compensatory damages. But Flatow, who also is a client of Perles, is still owed $225 million in punitive damages. Perles said that of the 350 cases under his watch, some 300 are still in the works. He attributed the slow going to an arduous and lengthy legal process. “The issue now is not how much we get, but how we enforce the judgment,” he explained. Efforts now center around lobbying on Capitol Hill, where Duker and the Eisenfelds are pressing a bill easing collection of Iranian government-controlled assets in the United States. The bill has been introduced in both the U.S. House of Representatives and the Senate, and is now being looked at by the Judiciary Committees. The case also has reached Europe, where a legal team in Italy is chasing Iranian government-owned commercial assets in the European Union. The case went to Europe as part of a strategy to avoid certain legal hurdles in the United States. Speaking at a March 8 memorial ceremony at the Jewish Theological Seminary in New York City — where Matt Eisenfeld was enrolled at the time of his death — the Eisenfelds, residents of West Hartford, Conn., and Duker, of Teaneck, N.J., described their journey as painful but empowering. “When something like this happens, your first response is there’s nothing you can do,” Duker said, speaking in a large seminary room named after Sara and Matt. “Terrorists rely on the fact that people feel helpless. “But we’re not helpless,” she continued. “We’re pursuing this, and we’ll keep on pursuing this.”