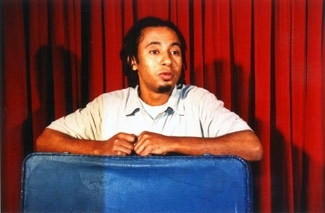 SAN FRANCISCO, March 23 (JTA) — As part of his one-man theatrical comedy, “It Sounds Better in Amharic,” Israeli actor Yossi Vassa recounted scenes from his youth in Uzava, the northern Ethiopian village where he was raised. “Children would run through lush meadows during spring,” he recently told a sold-out crowd at the Museum of the African Diaspora in San Francisco, “collecting flowers and offering them to friends and family, saying, ‘May spring be upon you every year!’ ” Vassa reached into a blue suitcase and pulled out a bouquet of flowers. Then, with a mischievous glint in his eye, he approached a young woman in the audience. Holding out the bouquet to Ahlan Mohammed, who had come to stroll through the Museum of the African Diaspora, not realizing there would be a show, Vassa flirted unabashedly — as the audience giggled in delight and Mohammed turned beet red. “I’m sorry, but you remind me of someone I know,” Vassa concluded wryly after asking Mohammed for her phone number. “I was shy, but it was great,” she laughed after the performance. Though she is Somalian, she says, “When I take off my glasses, everyone thinks I’m Ethiopian.” Vassa’s show, which he recently took on tour across the United States, offers wry, humorous and sometimes painful insight into the experience of Ethiopian immigrants in Israel, and helps audiences glimpse a side of Israel they may not often hear about on the news. Vassa left Ethiopia at age 10, making the dangerous journey to the Sudan as part of Operation Moses. During the nine months that he and his family waited to be airlifted to Israel, Vassa’s two little brothers and grandmother died from harsh conditions — including lack of medicine — and Vassa nearly lost his life as well. Though these traumas haunted Vassa in the years to follow, he shares them with both grace and humor through his performance — making it easy for audiences to listen, empathize and even laugh. Poking fun at the 430-mile trek, for example, Vassa said, “I don’t mean to brag, but it only took us three months. Exodus was 185 miles and took 40 years. Those guys were amateurs!” Vassa studied theater at Haifa University. Among his many student projects, he wrote and acted in three Amharic comedies about the Ethiopian community in Israel. He says he became a screenwriter out of necessity. “When Ethiopians are cast in television or movies, we’re just the waiters serving people, or something of that nature,” he says. “In Israel, the Ashkenazi world is the model for what to say, for what is beautiful, for what is aesthetic. To my luck, I can’t turn into an Ashkenazi. So I have to speak my truth.” Ten years later, Vassa spoke his truth across North America with sharp wit, personal narrative and five props. Exploring traditional Jewish life in Ethiopia, Vassa recalled, “Whenever my grandmother would visit, it was a big production. We’d all line up in front of the house and bow ourselves lower than her, out of respect. She was really short. That’s why I have back problems now.” Describing the community’s first interactions with Israeli society, he remarked, “They gave us all Israeli names, names that had nothing to do with who we were. Like the Ethiopian girls they called Levana,” or “white.” Vassa charmed audience members into a subtle exploration of the culture clash between Ethiopians and faranjim, or non-Ethiopians, in Israel today. Jibing at contemporary Western influence in Israel, he added, “At the bus stop, I saw this white guy with head-to-toe tattoos. I said, ‘Wake up, man! In Africa we write on paper now!’ ” “Nothing was too heavy, but it was thought-provoking,” Kristen Bechtold of San Diego said after the show. “It was so funny, so understated,” agreed Alma Robinson, a museum board member. Vassa’s show provided “education for all of us to recognize that there is a connection between blacks and Jews,” said Geol Weirs, director of museum member programs. “The more we think about the similarities, the more those barriers can fade.” “Part of the agenda we have,” said Yarden Schneider, event coordinator for the Israel Center, which co-sponsored the Bay Area leg of Vassa’s tour, “is to express what Israel really is, in all its diversity.” It was “very important,” she added, “for us to get it out there beyond the Jewish community.” From Florida to Pennsylvania to California, Vassa’s show attracted a racially and religiously diverse crowd, with those who grew up in Africa smiling nostalgically at Vassa’s recollection of Ethiopian Jewish heritage — specifically the profound respect children were taught for elders. The show “brings back memories,” remarked Toye Moses, an American immigrant from Nigeria. “I could hear my husband’s voice in the show, the way he raised our kids,” chuckled Robinson, Moses’ wife. “More people should see things like this,” said Fernando Corredor, an American immigrant from Colombia. “People may understand Israelis and the Jewish faith better if they saw things like this, which are not typical. It makes you want to learn more — all these stories you don’t know.”