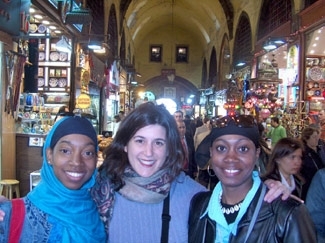 ATLANTA, May 4 (JTA) — Maybe I’m like you — Jewy. I grew up with all the key fixtures: Jewish youth groups, where I finally fit in; weaned on Loehmann’s, where, like generations before me, I fell in love with discount designer shopping; and a peer trip to Israel at age 16 that sealed the deal. I embraced minority status, for the love and comfort of community and an identity that fit. I went to the University of Pennsylvania, or the “Jewish Ivy,” largely because of its Jewish population. After college, I worked for Jewish organizations. Until recently, I was living on a Jewish island — Manhattan, and specifically its densely Jewish Upper West Side, where almost every Jew knows another Jew living in the same square mile. Synagogues of all stripes dot the corners, grocers advertise kosher products and young Jews carrying bulky, foil-covered dishes walk hurriedly to Shabbat dinners at each other’s tiny apartments. I made my 268-square-foot apartment work, and even hosted a Shabbat dinner or two. In New York, I also worked as a reporter for JTA, writing stories that were sent out on the wire to Jewish newspapers across the country. In short, I worked with Jews, played with Jews and wrote about Jews. So it was only recently, on an interfaith mission to Turkey, that I had a chance to really know, even bond with, the non-Jews among us. The Atlanta-based World Pilgrims program brought me along on an overseas mission, where visits to various holy sites are meant to educate travelers about each other’s faiths while they bond through the shared experience of travel. One mission at a time — this was its fourth — World Pilgrims is banking on a critical mass of believers to transform interfaith relations in Atlanta, where all the trip’s participants reside. The ripple effect already has started working. It turns out that my dry cleaner, car repairman, doctor and dentist all know other “pilgrims” on my trip. So how was I, a Jewy Jew, affected by rooming with student ministers and observing prayers at various mosques? Put differently, when you define yourself largely by being different from others, what happens when you find out how much you have in common? Just as observing an object from different angles allows you to fully appreciate it, a new experience lets you see yourself in new ways. For me, this trip reinforced my Jewish identity, while somewhat altering my understanding of it. Many of us define ourselves by our faiths and by the communities that surround them, or others do it for us. To be sure, it’s a simple truth that we are born into certain realities — race or religion — and our lives are shaped by them. Still, we don’t often have the opportunity, or the desire, to delve into learning about other religions — and frankly, most of us won’t get to ride around on a bus in Turkey for 10 days with people of different faiths. Most of us, though, can and should put ourselves in cross-cultural situations, because when you’re asked to explain Jewish life to non-Jews, you must explain what is automatic to yourself. You see beauty and differences and curiosities and commonalities. You realize that Christians and Muslims, like you, pray to one God and probably ask for the same things you do. And you appreciate concepts in other religions that Judaism does not stress — such as Christianity’s emphasis on love and forgiveness. So in learning where we depart and where we come together, what keeps us Jewish? For starters, tradition. But there’s more than that: After learning about other faiths and bonding with non-Jews, I found a renewed appreciation for being Jewish. For Judaism’s specific wisdom and path for a spiritual and fulfilling life. For the joy in observing the laws and rituals that put order and meaning into weeks, months, lives. And for the comfort in sharing a common ancestry and culture with other Jews — Jewish peoplehood, if you will. I recently attended a Shabbat morning class at Atlanta’s Congregation Beth Tefillah, where Rabbi Yossi New discussed the fact that the laws of Passover, even the Ten Commandments, focus more on what not to do than what to do. He explained this as rooted in the fact that human nature focuses on the negative, that it’s easier to know what one does not want than what one does. It takes righteousness, and effort, he said, to focus on the positive. For me, redefining Judaism as something other than “other” brought me closer to it, helping me to know it and appreciate it, rather than enjoy rote practice. At the same time, this trip broadened my sense of community to include Muslims and Christians. I saw that opening hearts among faiths reveals how peace is possible among people from different backgrounds. That goes for people of the same background, too. One pilgrim astutely observed that among the 30 of us were probably 30 distinct religions, if you count the nuanced approach each of us brings to our faith. Of course, with our history of infighting, Jews know that well. But we would do well to remember that even within the Jewish community, as in the broader world, we are both more different and more alike than we might assume.