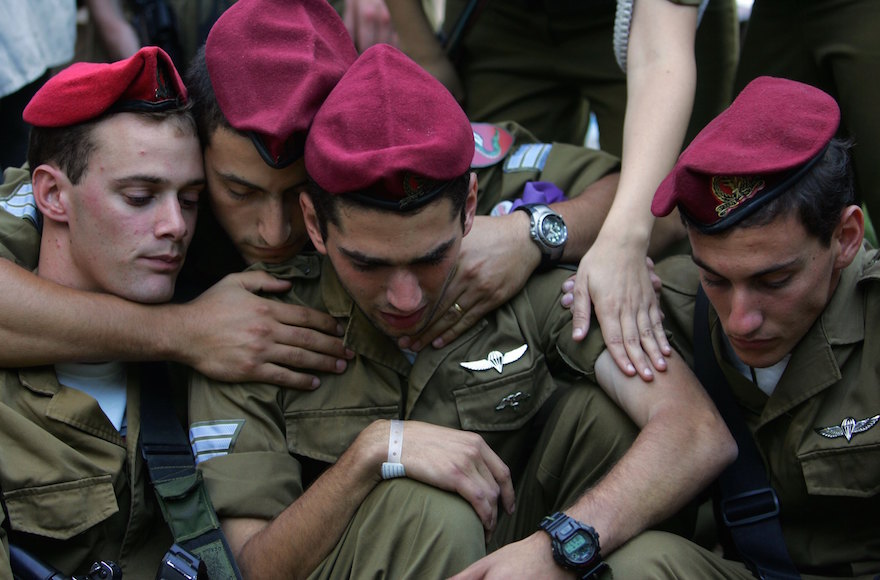 Israeli paratroopers comfort each other as they grieve at the grave of their friend First Sergeant Michael Levin during his funeral at the Mount Herzl military cemetery in Jerusalem, Aug. 3, 2006. (David Silverman/Getty Images)
Advertisement 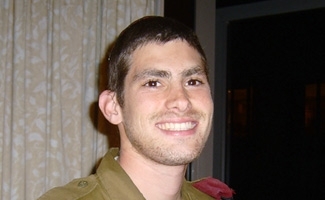 NEW YORK, Aug. 2 (JTA) â€” On Monday evening, thousands of pro-Israel demonstrators in Bucks County, Pa., cheered for Michael Levin, 22, a local boy serving in the Israeli army. By the next day, they were mourning his loss.

Levin was killed in southern Lebanon on Tuesday, along with two other Israeli soldiers. He is believed to be first American casualty of Israelâ€™s war with Hezbollah. He is the 36th Israeli soldier to lose his life since fighting began July 12.

Levin was remembered by family and friends as a “Zionist through and through.”

A long-time camper at Camp Ramah in the Poconos, Levin was active in the Hagesher Region USY and in his Conservative temple, Congregation Tifereth Israel.

Rabbi Jeffery Schnitzer remembered Levin as “a prize student” who would “debate you to death.”

“When he wasnâ€™t in Israel, Israel was inside him,” said Richard Waloff, a close friend of the family. “Ever since he was 15, he wanted to graduate high school and make aliyah.”

In part, friends and family say Levin was motivated by his grandfather, who fought in World War II. He also formed strong feelings about Israel on an eight-week Alexander Muss High School in Israel program.

At age 18, Levin acted on his dream of aliyah. He moved to Kibbutz Tirat Tzvi and studied Hebrew before enlisting in the army.

Baruch Ganz, 23, a close friend from both Israel and Bucks County, said Levin was a “thin, small guy,” but he quickly worked his way into an elite paratrooper division.

“The thing with Michael was that it was his energy, you know?” Ganz said. “A really passionate person â€” you canâ€™t stop them for anything.”

Levin also was remembered as a congenial, popular young man.

“He was the kind of friend everyoneâ€™s looking for,” said Rabbi Todd Zeff, director of Camp Ramah in the Poconos. “He always had a smile on his face.”

Levin had been at camp just two weeks earlier while on a visit to the United States.

“He was in great shape and great spirits,” Zeff said. “He talked about the fact that for him it wasnâ€™t having to go back, it was going back to do something that he believed in.”

“This was his choice, it was his dream, to serve and be in Eretz Israel,” Schnitzer added. “He said, â€˜Iâ€™m going in with my eyes wide open.â€™ ”

Still, the shock for family and friends was almost too great to bear.

Schnitzer said that when news of Levinâ€™s death spread through the synagogue, an executive committee meeting was ended on the spot.

“Weâ€™ve known this family for years,” Schnitzer said. “They were one of the early members of the congregation. People were in tears.

“I never really experienced my heart breaking before,” he continued. “Now I know what that feels like.”

At Camp Ramah in the Poconos, where Levin spent eight years as a camper and one as a counselor, about 100 staff members gathered to swap stories and memories.

Levin will be buried Thursday at the military cemetery on Mount Herzl in Jerusalem.

A memorial service will be held Aug. 7 at Shir Ami Synagogue in Newtown, Pa. Camp Ramah in the Poconos has rented a bus and plans to bring 50 counselors and staff members.

Levin is survived by two siblings: his twin sister Dara, a counselor at Ramah Day Camp; and Elisa, 26, an artist. Harriet, his mother, is an administrative assistant in the United Synagogue Mid-Atlantic Region; and his father, Mark, is a partner in a business that distributes motorcycle parts.

The family has asked that donations be made to American Friends of Magen David Adom and to the Israel Defense Forces.