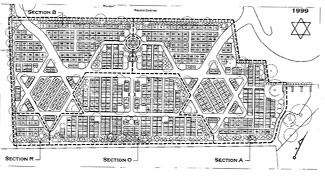 The design plan for Beit Olam, a cemetery serving Reform, Conservative and unaffiliated Jews in the greater Boston area, shows dividers in the shape of Stars of David separating Jewish-only sections from those open to intermarried families. (Courtesy of Beit Olam Cemetery)
Advertisement