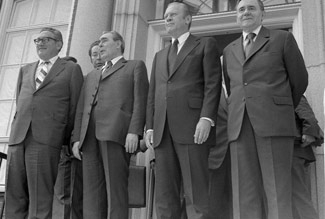 NEW YORK, Jan. 2 (JTA) — His presidency lasted less than 1,000 days, but it was enough time to support an international accord that provided a significant boost to the Soviet Jewry movement and marked a pivotal moment in the history of the Cold War. Gerald Ford, who died Tuesday at 93, signed the Helsinki Declaration in August 1975, along with the leaders of the Soviet Union, Canada and 32 European nations.

The agreement required the Soviet Union to respect human rights, including fundamental freedoms of religion, thought and conscience, and contributed to mounting international pressure to free persecuted Soviet Jews.

“His administration’s signing of the Helsinki accords, which established a clear link between international relations and human rights, was the most important step in the struggle to win the Cold War — even though, when they were signing it, both sides didn’t necessarily realize this,” said Natan Sharansky, an icon of the Soviet Jewry movement.

Sharansky was a founder of the Moscow Helsinki Group, an organization started to monitor Soviet compliance with the accord.

“The West thought that making a connection to human rights was important in and of itself, even if there was a chance that it turned out to be mere lip service,” said Sharansky, a former Israeli Cabinet minister who now is head of strategic studies at the Shalem Center, an academic research institution in Jerusalem. “As it happened, it ended up being the most decisive move to help dissidents in the USSR.”

Ford already had distinguished himself as a vocal supporter of Soviet Jews. In January 1975 he signed into law the Jackson-Vanik Amendment, which denied most-favored nation trading status to countries with restrictive emigration policies — an attempt to pressure the Kremlin into approving more exit visas for Soviet Jews.

“His brief presidency was very significant for the movement,” said Mark Levin, executive director of the NCSJ, which advocates for Jews across the former Soviet Union. “By signing into law the Jackson-Vanik Amendment, which was one of the pillars of the Soviet Jewry movement, as well as being president when the Helsinki Accords were implemented, which provided the international community a tool to confront the Soviets directly on their human rights abuses, particularly as they impacted the Soviet Jewish population — for that his administration will be remembered within the American Jewish community.”

As a congressman from Michigan and Republican minority leader in the U.S. House of Representatives, Ford attended a rally for Soviet Jewry in 1971 at Madison Square Garden in New York.

Malcolm Hoenlein, who had just become head of the New York Conference on Soviet Jewry and today is executive vice chairman of the Conference of Presidents of Major American Jewish Organizations, recalls that Ford spoke “very movingly, very forcefully” at the New York event.

In a statement issued Wednesday, the Anti-Defamation League remembered Ford for his support of Soviet Jews as well as his strong stance on Israel.

Appointed by Richard Nixon following the resignation of Vice President Spiro Agnew, Ford became president after Nixon resigned in August 1974 during the Watergate scandal. He remains the only U.S. president never elected as either president or vice president.

In Ford’s first appearance before a Jewish audience after entering the White House, he spoke before a dinner organized by the American Friends of Lubavitch in Philadelphia honoring U.S. Sen. Hugh Scott of Pennsylvania.

He also addressed a B’nai B’rith convention and the American Jewish Committee during his presidency.

Ford also met frequently with his liaison to the Jewish community, Detroit businessman Max Fisher. Their connection helped rebuild administration ties with the Jewish community that had been frayed by profound differences with Nixon on all issues except Israel.

Taking over from Nixon, Ford kept Henry Kissinger as secretary of state, mindful of the delicate diplomatic fabric that emerged in the Middle East after the 1973 Yom Kippur War. Kissinger’s intensive shuttle diplomacy and Ford’s active interest culminated in a truce between Israel and Egypt in 1975.

That truce, and the quiet that ensued, laid the groundwork for the 1978 Camp David peace accords brokered by Ford’s successor, Jimmy Carter.