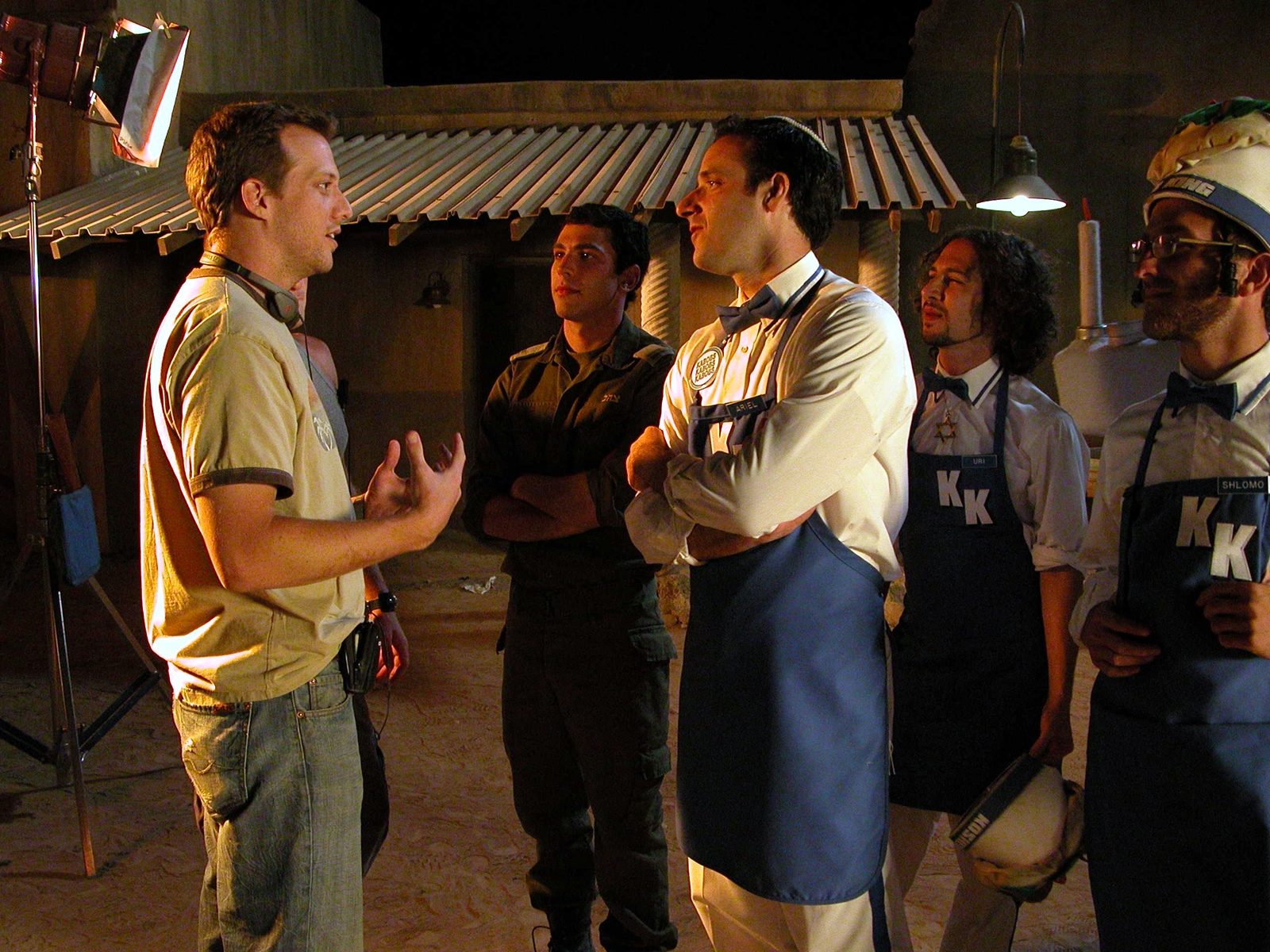 LOS ANGELES (JTA) — The arc of “West Bank Story,” from student project to Oscar winner, is the kind of fairy tale Hollywood used to crank out in more innocent days. But turning fantasy into reality, Ari Sandel’s 21-minute movie, taglined “A little singing, a little dancing, a lot of hummus,” won the Academy Award for Short Film-Live Action on Feb. 25.The title is a riff on Leonard Bernstein’s “West Side Story.” In this case, though, the confrontation is between competing West Bank falafel stands, the Israeli Kosher King and the Palestinian Hummus Hut. Their weapons are falafel and hummus folded into a pita, the soul food loved by all Middle East factions. Into this delectable mix stir David, a handsome Israeli soldier, and the beautiful Fatima, who works at the Hummus Hut, and you can probably figure out the basic plot line. Amid catchy tunes, dancing and a mugging camel, David and Fatima fall in love. After both eating establishments are set on fire, the lovers persuade the rival owners to join hands and hummus to feed their hungry customers. [photo sandel02 align=left] Viewers are free to draw hopeful analogies to current Middle East problems. Sandel, 32, tall and fast talking, says he’s ready for his closeup. His father is Israeli, his mother a Los Angeles native, and in 2004 Sandel was mulling over a subject for a less-than-30 minute film, a thesis requirement at the University of Southern California’s School of Cinematic Arts. Sandel knew that he wanted to say something about politics and the Middle East, two of his longtime passions. His first idea had to do with checkpoints and suicide bombers, but he was looking for something funnier and more hopeful. What do Israelis and Palestinians have in common, he asked himself and co-writer Kim Ray, and the answer was a love of food. “After that, everything fell in place,” he said. All Sandel needed was a cast, a songwriter, a choreographer, a set, costumes, a budget — and lots of hummus. He hit up friends and family for a total of $74,000, auditioned fellow students for the parts and hustled movie studios and merchants for freebies. “I got free set props from Warner Brothers, free post-production services from someone else, and one acquaintance printed up free business cards for me,” Sandel recalls. On a commercial movie ranch outside Los Angeles, Sandel found the set for a small Arab town, including a minaret, and in 14 days he wrapped up the film. “I thought we had done a pretty good job and now my ambition was to screen the film in three venues — Sundance, Jerusalem and Dubai,” he said. “West Bank” premiered at the Sundance Film Festival in 2005 and received a warm response. Next came a screening in Jerusalem. With two-thirds of his goal fulfilled, Sandel wrote an impassioned letter to the Dubai Film Festival and, to his amazement, the film was accepted in the “Bridging Cultures” category.”The Dubai festival is sort of a Middle Eastern Sundance, only you get much more of a VIP treatment,” Sandel said.The United Arab Emirates capital is a rapidly modernizing city, but officially no Jews live there and no one had ever shown a movie depicting an Israeli soldier in a positive light. So when “West Bank” screened in Dubai’s biggest venue before 1,000 Arab dignitaries and movie producers, Sandel was understandably nervous. The post-film question-and-answer session started badly. One Arab rose to protest that the film failed to portray the suffering of the Palestinian people, and half the audience applauded. Another man was unhappy with the lack of scenes depicting Israeli brutality. Finally a woman stood up, identified herself as a refugee from Gaza, said she loved the movie and asked how she could get a copy for her friends and relatives. With such a Palestinian imprimatur on the record, the audience turned friendly and the evening was deemed a success. “West Bank” in its showings at 112 film festivals occasionally has been criticized as being “too American” or “too simplistic.” But it has also garnered 25 awards, including the Audience Choice Prize in Beijing. Requests for DVDs of the movie have come from Qatar, Egypt and other Muslim countries. Sandel describes the short film genre as “the no-man’s land of filmmaking,” with no studio backing and few monetary rewards — he still hasn’t made back his $74,000 investment. But it can be a great calling card, especially with an Oscar attached. Sandel says he is “obsessed” with the politics of the Middle East, visits Israel every year and seems open to all views. He is active in both AIPAC and Peace Now, two groups usually on opposite sides. “My intention was to make a movie that Israelis and Jews would watch and find themselves liking the Arab characters, and that Arabs would watch and like the Israeli characters,” he said backstage at the Oscar ceremony.”Is the film is going to change the world or do anything else? Probably not. But, you know, if you can change just a few minds… I get e-mails from all over the world, from Israelis and Arabs, talking about how much the movie meant to them. That’s hopeful because otherwise there is such a sea of negativity out there.”For Oscar night, Sandel rented a tuxedo and escorted his mother, Kathy, down the red carpet. His cousins in Israel threw a party, and friends and relatives watched the show on television at his father’s house in Malibu. The evening’s refreshments, of course, were falafel and hummus. □