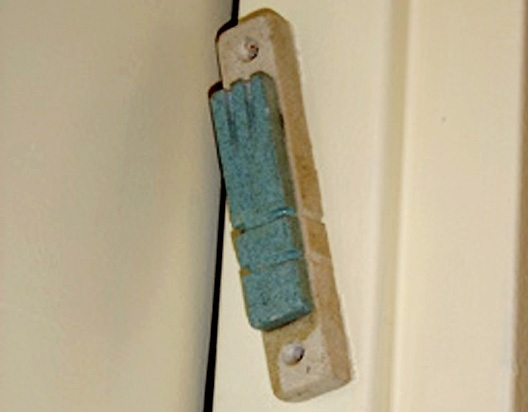 A Florida woman is fighting for the right to hang a mezuzah on her door in an escalating dispute with her condominium managers. Laurie Richter, an attorney in Fort Lauderdale, was informed by her condo association in late January that her mezuzah violated building regulations and that the failure to remove it could result in fines of $100 a day. The association, which runs the 129-unit waterfront building known as The Port, says its by-laws prohibit occupants from affixing anything to exterior walls, doors or balconies. But Richter counters that many residents hung Christmas wreaths from their doors during the recent holiday season and none were ordered to remove them.Richter lives in the unit with her partner, Jonah Spector. “To our knowledge, none of them were cited or fined in the same manner that Ms. Richter and Mr. Spector were,” Richter’s attorney Randy Berg told JTA. “Obviously they’ve been singled out on the basis of religion for disparate treatment. And it violates the Fair Housing Act.”The Port said, however, that statements in the media claiming the association allowed some religious symbols in the common areas but disallowed others were “unfounded.””The Association enforces its rules in a uniform manner, regardless of the background of the persons involved,” The Port said in a statement.Richter provided photographic evidence of wreaths hanging in the Port. Richter is not the first condo tenant to run afoul of building
regulations by affixing a mezuzah to her door. A similar case in
Chicago led both the city and the State of Illinois to adopt
legislation prohibiting condo associations from preventing
residents from hanging mezuzahs. The Illinois statute went into effect
Jan. 1. Richter’s plight has gained national media coverage and attracted
the attention of the Anti-Defamation League’s Florida chapter, as well as two local lawmakers who are supporting legislation that would
guarantee a Florida resident’s right to display a mezuzah. The state
attorney general’s office also has launched an inquiry into the matter.
“We are concerned that it may be a violation of the fair housing
right and constitutional guarantees of freedom of religion,” Allison
Bethel, a senior assistant Florida attorney general and director of
civil rights for the office, told JTA.According to Richter, Ronni Rosenberg, the association president, told her that she had not been aware of the wreaths. A representative for The Port told JTA that residents had been asked to remove wreaths in the past. Richter said two other residents of her complex have since put up mezuzahs, apparently in solidarity. She is scheduled to have a hearing with the condo association March 7. “I wouldn’t call this anti-Semitism,” said Richter, 28. “I might say it’s tantamount to discrimination.” The trouble began in late January when Richter was informed by the association that she was in violation of the building’s regulations for affixing a mezuzah to her door. Richter asked the association to reconsider the decision and threatened further action if it refused. Marcy Kravit, the building’s general manager, relayed the board’s refusal to Richard Scrabis, the unit’s owner and Richter’s landlord. The management claimed that only Scrabis, as the unit’s owner, could request an exemption.Berg, a civil rights attorney specializing in fair housing cases, said the association has shown no interest in resolving the matter, refusing even to return his phone calls. “This is a very unfortunate case which by now surely should have been resolved through cooperation and any mediation required,” Art Teitelbaum, the ADL’s Southern area director, told JTA. The ADL also wrote to the association on Richter’s behalf. “One thing is certain: Thousands of Jewish families in hundreds of condominiums throughout South Florida display mezuzahs on their doors without any negative or detrimental impact on the lives of their neighbors or the integrity of the condominium property,” Teitelbaum said. “The condominium association in this case has thus far been unwilling to compromise or seek a solution that would allow Ms. Richter to fulfill the mandate of her faith.”Rep. Julio Robaina, who represents Miami-Dade County in the Florida
House of Representatives, told JTA he thinks a bill similar to the one in Illinois could be adopted in Florida in as little as two weeks.
“This is cut and dried,” he said.