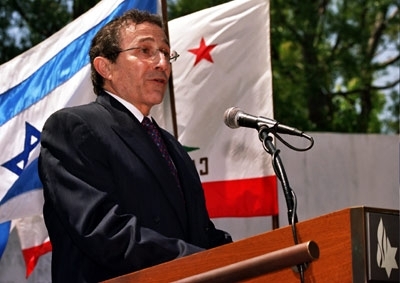 NEW YORK (JTA) – Forbes magazine may be famed for its annual ranking of the 400 wealthiest Americans, but Newsweek is giving that list of high rollers a run for its money with a list of America’s top holy rollers.Topping the list of the country’s most influential rabbis is Marvin Hier, dean of the Simon Wiesenthal Center in Los Angeles. Chabad Rabbi Yehuda Krinsky, right-hand man to the Chasidic sect’s late rebbe, came in second. Uri Herscher of the Skirball Center in Los Angeles, Yehuda Berg of the Kabbalah Center in Los Angeles and author Harold Kushner rounded out the top five. Sharon Kleinbaum of the Beth Simchat Torah synagogue in New York City was the top-ranked woman rabbi at No. 19. Only five women made the list. Several of the rabbis – including Elliot Dorff (ranked No. 30), Irwin Kula (8) and Zalman Teitelbaum (15) – also appear on the Forward 50, the Jewish paper’s annual list of the most influential Jews in America.Unlike the Newsweek list, the Forward rankings are not limited to rabbis and include Jews active in politics, activism and sports, among other categories.The Newsweek ranking is the work of three Hollywood power brokers: Sony Pictures
CEO and Chairman Michael Lynton; Gary Ginsberg of News Corp.; and Jay
Sanderson of JTN Productions. The trio used a crude ranking
system to determine the rabbis’ renown, judging them on their
international reputation, media profile, political influence and
constituency size, among other criteria.”I promise I won’t let it go to my head,” Hier told JTA. “I’m honored that I came out as No. 1. I’d be less than candid if I said that I felt differently.”Shmuley Boteach, who placed ninth, had a different take. The author of “Kosher Sex” and star of the reality television series “Shalom in the Home” isn’t known for fleeing the spotlight, but in this case he didn’t mince words, calling the list meaningless, corrosive and fleeting. “It’s bad enough that every Tuesday at 5 I need to wait for the ratings of ‘Shalom in the Home’ to see what my number is,” Boteach said. “And now there’s another list.” Sanderson told JTA that Boteach “obviously didn’t understand what the list was all about,” which he described as an effort to initiate a conversation about the changing role of Jewish leadership. Sanderson concedes that he’s disappointed with what has ensued. “The most surprising thing was how defensive a lot of people are about the list,” he said. “The conversation isn’t as constructive as I hoped it would be.”Marc Schneier (33) told JTA he found it “very telling” that few rabbis on the list were both congregational and organizational leaders. Among the exceptions – besides himself – are Avi Weiss (25), who leads a synagogue in New York City as well as the Yeshivat Chovevei Torah Rabbinical School; and Michael Lerner (28), editor of Tikkun magazine and rabbi of Beyt Tikkun in Berkeley, Calif. The list’s appearance Monday set the Jewish blogosphere buzzing, inspiring a storm of talkback comments that parsed the list from numerous angles, obsessing over the denominational breakdown, geographic distribution and omissions. The ranking included more Orthodox rabbis (15) and fewer Conservative ones (10) than their proportion of the overall U.S. Jewish population would suggest. It also was weighted toward the West Coast, with four of the top 10 based in Los Angeles. Critics also questioned what business three Hollywood types have ranking the nation’s rabbis. One bone of contention concerned Berg, who some contend isn’t even really a rabbi. As founder of the Kabbalah Center in L.A., Berg has gained fame for ministering to the likes of Demi Moore and Madonna. “Any list that has Yehuda Berg on it is a list that I do not want to be on,” said one rabbi who made the cut. “I think his name up there on the top tells you all you need to know about the Jewish sophistication of these folks.” Attempts to reach Berg on Tuesday were unsuccessful, but Sanderson defended his inclusion, saying Berg is largely responsible for the public’s increasing familiarity with Kabbalah.”This is a pop phenomenon,” Sanderson said, “and he’s in the middle of it.”