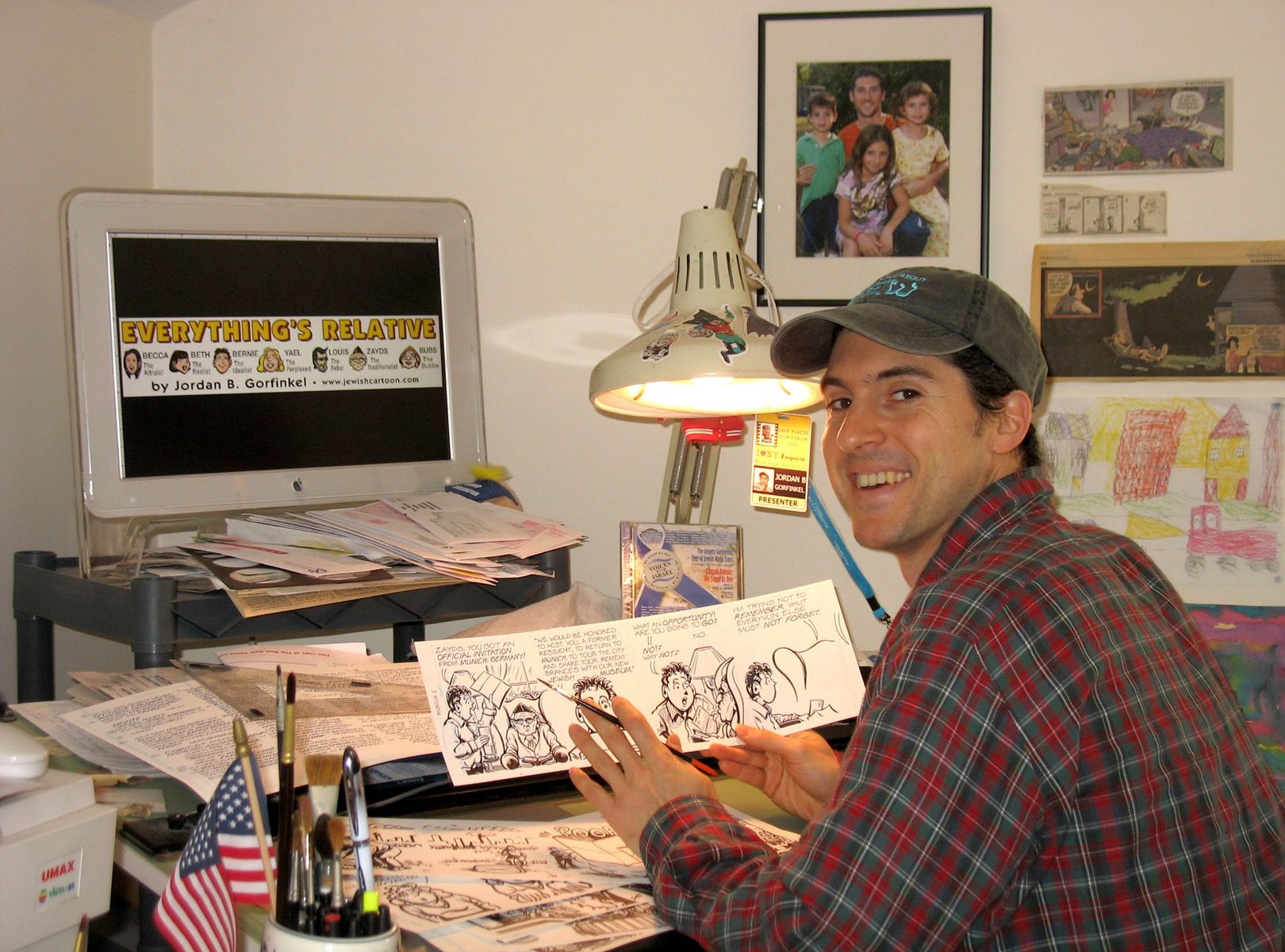 BERLIN (JTA) — In a panel of Jordan Gorfinkel’s “Everything’s Relative” comic strip, Holocaust survivor Zayds explains why he won’t visit Germany.”I’m trying not to remember vhut everyvun else must not forget,” says Zayds, who appears larger than life on the walls of the new Jewish Museum in Munich.The cartoon Zayds eventually goes to Germany. But the person he’s based on — Gorfinkel’s father-in-law, Nathan Burzinski — can’t do it.”It’s not the ribbon tied into the neat bow that, being a writer, I wanted,” Gorfinkel said before leaving Cleveland to attend the museum’s March 22 gala opening. “But it’s revealing and truthful. In fiction, it’s easy to take a Holocaust survivor back to Germany. I just draw it that way. Reality isn’t so cushy.”Gorfinkel knows how to roll with the punches, and to deliver punch lines: He’s been doing it for more than 10 years. But recently he accepted a challenge that took him to the far reaches of his skills: to prepare 40 panels recounting the last 100 years of Jewish life in Munich.The cartoons are silk-screened on the walls of the museum and can be read from 50 feet away, says Gorfinkel, who is more accustomed to seeing his work postage stamp-sized.It was “a huge responsibility,” Gorfinkel told JTA in a telephone interview. “I am trying my best to be constructive, positive and good for the Jews.”The new city museum, which officially opened March 23, is part of Munich’s new Jewish community center, with a synagogue, schools and cafe. The project is the brainchild of local Jewish leader Charlotte Knobloch, who is president of the Central Council of Jews in Germany.Museum director Bernard Purin wants visitors to learn about local Jewish life, history and religion. He thought comic art would be a good form to deal with contemporary issues and approached Gorfinkel in 2005.”Surely you mean Art Spiegelman,” author of the Pulitzer Prize-winning “Maus” cartoon trilogy, Gorfinkel says he told Purin. ” ‘I’ll get you his number.’ He said, ‘No no, we want you.’ ” Gorfinkel’s wife, Amy, urged him to take advantage of “this once-in-a-lifetime opportunity… and she made me update my will.”He approached the challenge boldly.”We Jewish people have always dealt with difficult subjects through humor. It is not always ‘ha ha’ humor. There is also irony, satire and vaudeville,” he says.Gorfinkel drew on his own convictions, “presuming that they would mirror those of other contemporary Jewish people like me.” Gorfinkel was born in Chicago in the 1960s. His parents split up, and he “moved something like a dozen times before the age of 18. My best friend was the comic book.” His talent developed surreptitiously. “Instead of paying attention in class, one doodles,” he says. His early inspirations were Charles Schulz of “Peanuts” fame, Gary Trudeau of “Doonesbury” and Will Eisner, a pioneer of the graphic novel. Gorfinkel became a DC Comics editor in the 1990s. In 1996, “Everything’s Relative” was launched in The New York Jewish Week and now runs in some 30 papers. Gorfinkel also is a musician and record producer.His strip features “a cast of five 20-somethings who struggle with faith and tradition.” They live in a building owned by two Holocaust survivors, “adoptive grandparents” whom they affectionately call Bubs and Zayds. “They serve as the voice of reason and wisdom and chicken soup,” Gorfinkel says. The only superheroes here are “Sarah, Abraham, Moses, Deborah and Golda Meir,” Gorfinkel says. And the arch villains? “Ignorance, intolerance and Passover ketchup, spelled c-a-t-s-u-p. Those are my top three.”Before sending his characters to Munich, Gorfinkel visited twice. He also consulted with the Simon Wiesenthal Center, Elie Wiesel and the U.S. Holocaust Memorial Museum. At first, Gorfinkel “expected to hear goose-stepping coming around the corner every moment. And the second most prominent question on my mind — after looking at older Germans and asking, what were YOU doing during the war? — was looking at Jewish people and asking, what are YOU doing in Germany?”To his surprise, he found Jews were choosing Germany over other European countries. Munich’s Jewish population — 11,000 before the war and 2,800 afterward — is up to 9,200 today thanks to the influx of Jews from the former Soviet Union. People in Munich “are multilingual and multicultural,” Gorfinkel says. It’s “quite a lovely city that I really rather like. And whenever I say that to people, they look at me absolutely aghast.” His new panels will be serialized in papers that already run the strip. He hopes others will pick it up. True to form, Gorfinkel lets irony and sarcasm rip on the walls of the new museum. Zayds speaks for all those who, like Nathan Burzinski, cannot go to Germany for whatever reason. Zayds’ ambivalence is palpable.Against the looming backdrop of the Rathaus, or city hall, tour guide Josef Rabinovich, a Jew, asks, “What do you think of our city?” “Very clean,” Bernie the Idealist answers.