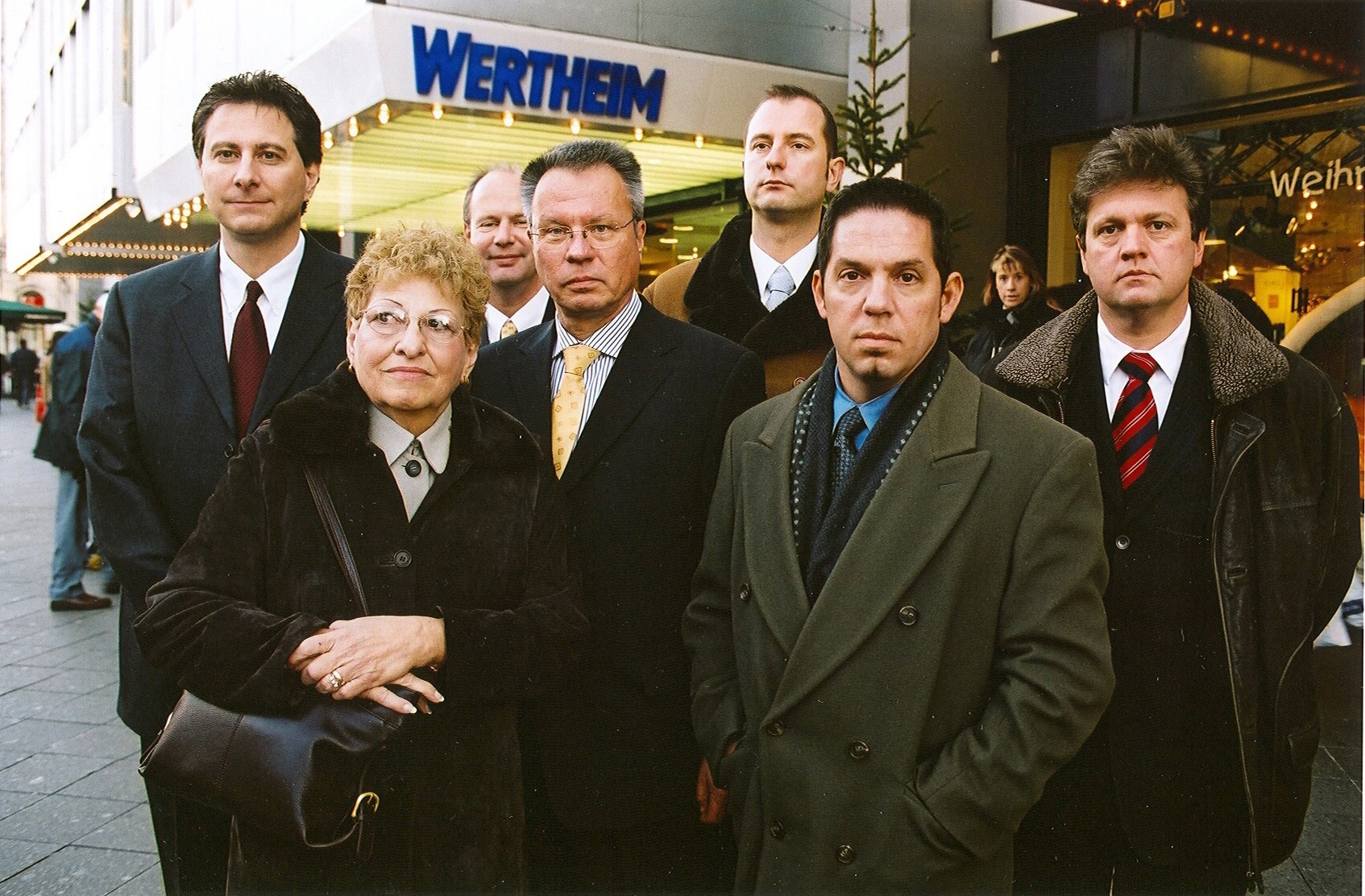 Descendants of the Wertheim family stand in front of a store their family owned before WWII, during a 2003 trip to Berlin. (Courtesy of Osen & Associate)
Advertisement

BERLIN (JTA) – Heirs of Germany’s Wertheim family have received one of the largest compensation payments to ever result from Holocaust-related restitution. In a settlement announced March 30 in Duesseldorf, the KarstadtQuelle corporation agreed to pay the Claims Conference $117 million for the last remaining major pieces of property formerly belonging to the family 62 years after the end of World War II.The Claims Conference negotiated the settlement in months of secret meetings..Speaking for some 50 members of her family, Wertheim heir Barbara Principe of New Jersey said she and her family were “glad that we have finally reached this agreement with KarstadtQuelle AG to end the legal battle over Wertheim.” In words widely cited in the German press, she praised the decision by the company and thanked the Claims Conference – currently under director Roman Haller – for its years of efforts.In particular, Principe thanked former German Interior Minister Gerhart Baum andjournalist Henryk Broder, who had supported her request last September for a personal meeting with KarstadtQuelle company head Thomas Middelhoff. The firm had rejected the request as a pressure tactic.But ultimately Middlehoff met with Haller in private talks mediated by former German Chancellor Helmut Kohl. Now Middelhof is calling the settlement “our just responsibility vis-a-vis history.”As part of the settlement, KarstadtQuelle also reportedly will withdraw claims on 50 other Wertheim properties in Berlin and the former East German state of Brandenburg. The Claims Conference will administer the settlement.Some funds will go toward Claims Conference-funded programs for Holocaust survivors; the rest will go to the Wertheim heirs.The land in question had belonged to the Jewish Wertheim family before the Holocaust, along with multiple other properties. When they opened a small shop in 1875, Ida and Abraham Wertheim planted the seed for one of Germany’s largest department store chains, but lost their property after they fled Nazi persecution in 1939.The major piece of property covered by the settlement is located within the so-called Lenne Triangle in former East Berlin. In 1988, a land swap between East and West Germany made the triangle part of West Germany. Though the German government had designated the Claims Conference the successorto unclaimed former Jewish property in the former East Germany, it was not clear whether the Lenne Triangle was covered by this legislation because it was now in West Germany, where restitution legislation had expired.The Claims Conference had been assigned by Germany to represent the interests of Jews whose property was confiscated by the Nazis or forcibly sold at undervalued prices.But the German government had given Karstadt the property in 1991, before its legal status had been established. In 2000, Karstadt sold the property to billionaire investor Otto Beisheim, who built the Ritz Carlton Hotel on the site. Litigation regarding the properties began almost immediately. In 2004, a federal court ruled that other land in the Lenne Triangle should have been awarded to the Claims Conference.Following a series of court rulings in favor of the Claims Conference, Karstadt withdrew its claims to several Wertheim properties in December 2005.In the fall of 2006, the Restitution Authority ruled that several sites, including the Besheim Center, must be turned over to the Claims Conference. The current decision affirms that ruling. Claims Conference Executive Vice President Gideon Taylor said the
settlement brings to a close one of the largest and most complicated
Holocaust restitution cases taken by the Claims Conference.”It is a
symbolic recognition of a painful chapter in the history of the Jews of Nazi-era Germany,” he said.