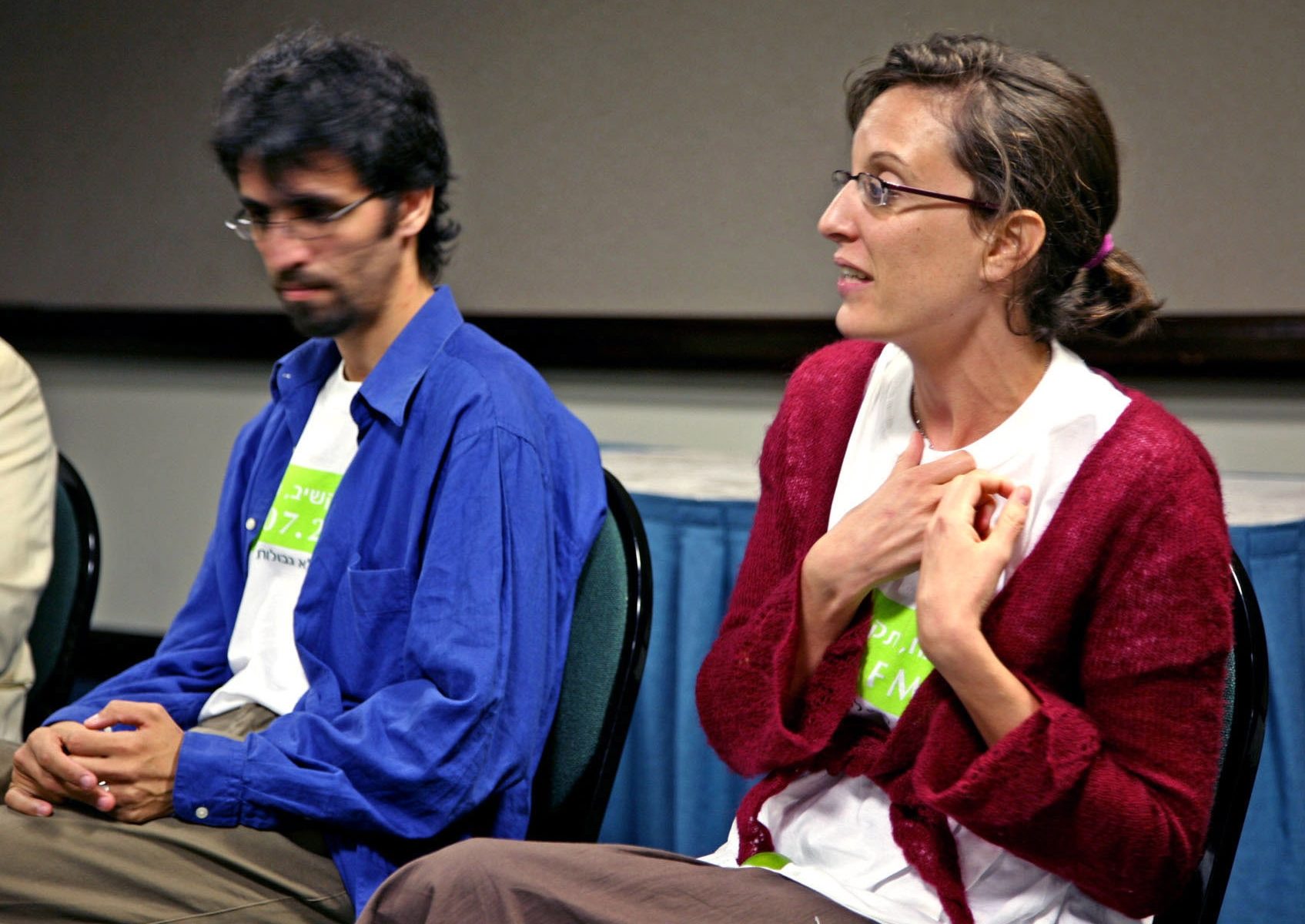 JERUSALEM (JTA) – As they usually do, Israeli radio stations marked this year’s Memorial Day for Fallen Soldiers and Victims of Terrorism by switching their playlists to somber tunes.But Radio All For Peace, a Jerusalem-based, Israeli-Palestinian station whose listeners are split about evenly between Israel and the Palestinian territories, extended its Memorial Day commemoration across borders: It broadcast a daylong marathon of interviews with bereaved families on both sides of the Palestinian-Israeli conflict.The interviews were taken from the station’s weekly show “New Direction,” hosted in Hebrew and Arabic by Israeli Sharon Misheiker and Palestinian Aziz Abu Sarah, each of whom lost a brother in the conflict.The hosts belong to the Bereaved Families Forum, an organization of Israeli and Palestinian families whose loved ones were killed in the conflict and who work toward reconciliation between the two peoples. In each hourlong program, the “New Direction” hosts interview a Palestinian and an Israeli from the forum about why they chose dialogue over revenge.”There are many differences between Palestinians and Israelis, the war isn’t over and the killings haven’t ended – but the pain of bereavement that exists on both sides is an equal pain,” Misheiker and Abu Sarah said on the air Monday morning, in alternating Hebrew and Arabic, as they introduced the Memorial Day marathon.”To honor both peoples and their emotions, and with a deep commitment to forwarding peace and reconciliation, Radio All For Peace decided to dedicate this day to the bereaved on both sides who chose a pathway of reconciliation and peace building, and not a pathway of revenge and killing.”The 12-hour broadcasts began at 8 a.m. and alternated between an hour of quiet music in Arabic and Hebrew and an hour of interviews. The marathon ended in time for Israel’s Independence Day. “Each side, the Palestinian side and the Israeli side, tends to recognize its own pain and ignore the other’s pain,” said Shimon Malka, the station’s Israeli co-director. “Through this day of programming, Radio All For Peace’s message is clear: No one is alone. Pain is not exclusive.””We’ve been living the same thing for the last 59 years,” added Maysa Baransi Seniora, the Palestinian co-director, “and nothing has changed. Every year there is more killing on both sides. ‘New Direction’ says to its listeners, we haven’t gained anything through all this killing, let’s find a new direction.”Among those interviewed was Robi Damelin, an Israeli activist in the Bereaved Famlies Forum whose son David was killed by a Palestinian sniper during military service. Damelin wrote a letter of reconciliation to the sniper, which was delivered to the sniper’s family by two Palestinian members of the forum. Others interviewed included Arnona Weiler, an Israeli who lost two siblings in the conflict; Naila Daruza, a Palestinian whose photojournalist husband was killed while on assignment; Yuval Rot, an Israeli whose brother was kidnapped and killed by Hamas; Aisha il-Khatib, a Palestinian whose brother was wounded on his way to visit his uncle and who died years later from his wounds; and Nadia Kadur, an Israeli Druse whose son died in a suicide bombing.The interviewers are no strangers to bereavement: Abu Sarah’s older brother, Tayseer, allegedly died as a result of Israeli jail beatings and interrogations 18 years ago. Ten years years ago Misheiker’s younger brother, Gilad, was one of 73 soldiers who died in a large-scale helicopter crash en route to army service in Israel’s southern Lebanon security zone. “When you lose someone, no matter if you are Palestinian or Israeli, you feel the same,” Misheiker said.Misheiker said that one reason she feels at ease with Aziz is that “when he speaks about his brother, I hear myself.”While Radio All for Peace’s other programs are broadcast in either Hebrew or Arabic, “New Direction” is the only bilingual program on the station and in the region. The translations may be laborious to listeners, but Misheiker sees bilingualism as part of the show’s message.”The process of reconciliation is a very, very slow process,” he said. “It’s not a fast-food counter. You need patience.””New Direction” enjoys one of the highest ratings on Radio All For Peace: Nearly 26,000 listeners in Israel, the West Bank, the Gaza Strip and around the world tune in each week. The show is aired Mondays and Wednesdays from 6 to 7 p.m.
Jerusalem time, locally on 107.2 FM and online at www.allforpeace.org.”People want to hear the real stories,” Abu Sarah said. “That’s what we offer: the real person. Not the political view, not people who plan what to speak beforehand, people who say, ‘Look, this was hard for me, they killed my son, I wanted to go and kill somebody, but I thought about it and this is what works.’ “Daniel Estrin is a freelance reporter based in Jerusalem. He volunteers as host of an English-language program on Radio All For Peace.