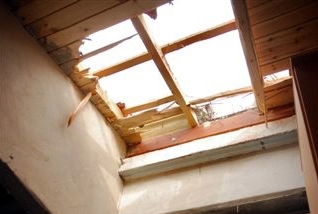 A hole left in the ceiling of a home in Sderot that received a direct hit by a missile fired from Gaza, May 16. (Courtesy Edward Kaprov/SELAH)
Advertisement

JERUSALEM (JTA) – After days of holding its fire while Hamas battled rival Palestinians in the Gaza Strip and fired rockets over the border, Israel is fighting back.The Air Force struck repeatedly in Gaza on May 16, killing five Hamas terrorists in operations on a scale not seen in months. Israel threatened further escalation unless the shelling of Sderot and other southern Israeli towns stopped.The following day, at least four Hamas terrorists were killed as the Air Force carried out a series of strikes across northern Gaza,
including one on a Hamas compound that wounded dozens.

A
mother and her 9-year-old daughter were being treated for shock
Thursday after Palestinian rockets landed in Sderot and the western Negev. At
least 13 rockets were reported to have hit Israel on Thursday; a total of 40 have landed since Tuesday. Prime
Minister Ehud Olmert has promised a “harsh and severe” response,
including the renewal of targeted assassinations of terrorists.”Until now we have demonstrated restraint, but this situation is not a tolerable situation,” Foreign Minister Tzipi Livni told reporters Wednesday after closed-door consultations with Olmert and Defense Minister Amir Peretz.Olmert’s office said he had authorized a series of military strikes against Palestinian rocket crews and their commanders, a signal that Israel could resume its controversial “targeted killings” of terrorist leaders in Gaza.The announcements followed a surge of rocket salvoes on Sderot that injured dozens of residents, prompted hundreds of others to flee in panic and stoked calls for a large-scale Israeli ground sweep of Gaza.In response to Israel’s air strikes, Hamas threatened to resume suicide bombings. A
spokesman for the terrorist group that rules the
Palestinian Authority was weighing a new campaign in
Israel after abandoning the tactic months ago – at about the same time as it pursued political primacy.While no one has illusions that a truce called by Olmert and P.A. President Mahmoud Abbas in November is still in force, Israel is not expected to give its military free rein yet.Israeli officials believe one of Hamas’ aims in stepping up rocket attacks is to prompt the sort of fierce Israeli retaliation that could unite Palestinians and stem what appears to be a civil war brewing in Gaza. That may not suit Israel and Western powers, which have been hoping for Hamas to fail since it swept Palestinian Authority elections a year ago and then refused international peacemaking demands.Abbas, meanwhile, has been trying to find ways to marginalize Hamas while preventing his more moderate Fatah faction from being cast as an Israeli stooge.The Hamas-Fatah clashes erupted May 11 and have raged despite at least two high-level cease-fire calls. More than 40 people have been killed, some in street-corner executions.Apartment blocks have been set aflame in sights recalling Sarajevo or Mogadishu during their darkest days. Palestinians have described the strife as a “second nakba,” a reference to the Arabic term for the “catastrophe” of Israel’s creation. Earlier this week Israel gave its permission for the Rafah crossing on Gaza’s southern border with Egypt to be opened so a 450-strong detachment of Fatah fighters – beneficiaries of U.S.-sponsored training and equipment – could enter. Vice Prime Minister Shimon Peres said more help could be coming. “We should help Mr. Abbas in his fight against the terrorists,” he said. “We can only respond to Mr. Abbas’ requests for help. We will not intervene in the war itself, but if Mr. Abbas will request specific help, we will supply” it.