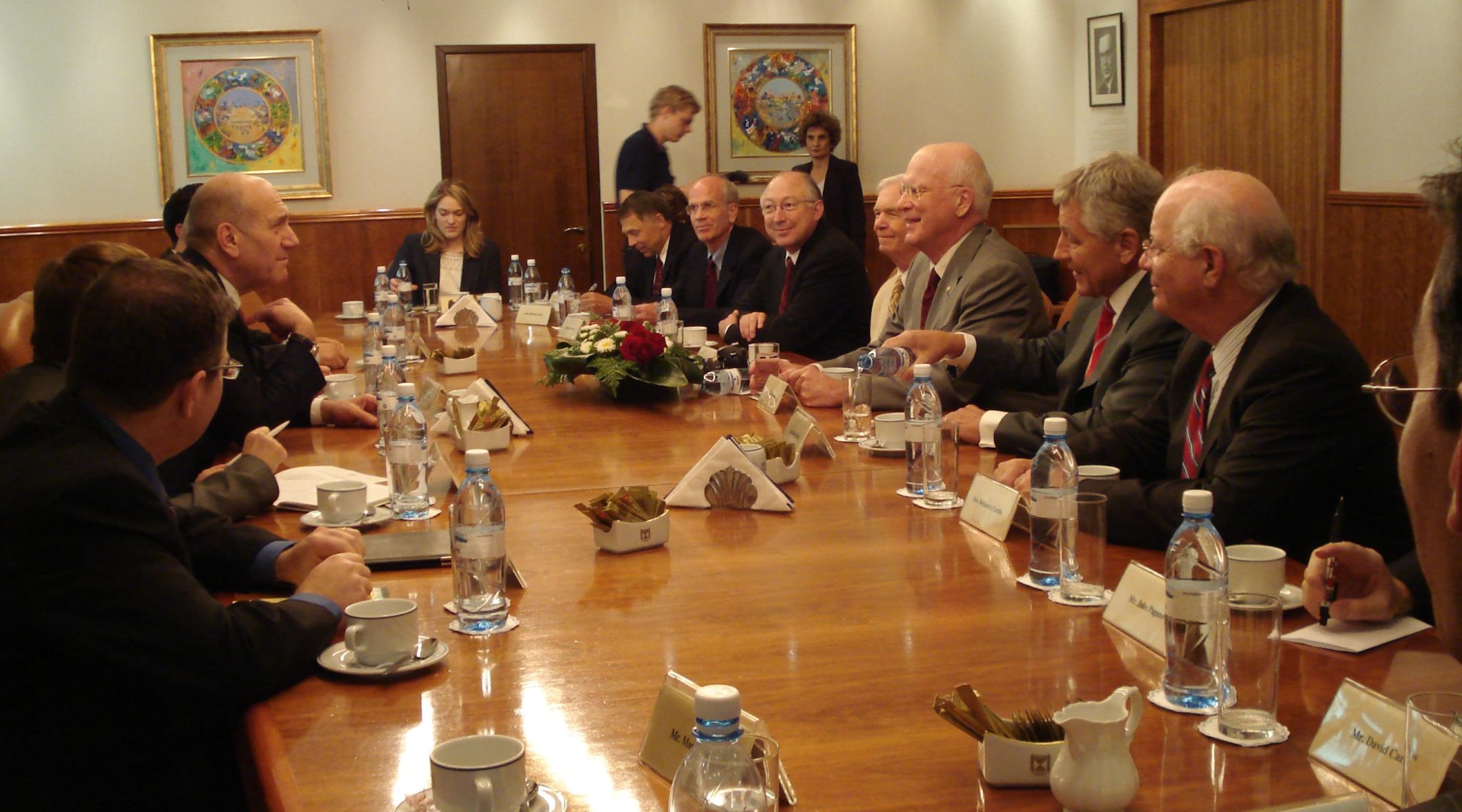 U.S. Sen. Patrick Leahy, across from Ehud Olmert, and a delegation of U.S. lawmakers meet with the Israeli prime minister in Jerusalem during a three-day trip to Israel. (Courtesy of Senator Leahy's office)
Advertisement

WASHINGTON (JTA) – Democrats raced to voice public outrage
after Republicans in the U.S. House of Representatives voted two weeks ago
against a foreign operations bill with money for Israel.

In private, however,
some Democrats are worrying that the next challenge to such funding
measures could come from their own ranks.

About 80 percent of House Republicans were part of the failed attempt to defeat the $34 billion foreign operations
bill, citing objections to funding organizations that provide abortion
services overseas, not the $2.4 billion for Israel.

Democrats are concerned that the
precedent of bloc voting against such funding measures could embolden members
of their own party to take similar steps.

Top Democrats say as many as 60 of their fellow party
members in the House have long complained about foreign aid and, in theory,
could end up forming a bipartisan majority with the 161 Republicans who rejected the foreign operations bill.

“The leap from 161 to 218 is scary to me,” one
Democrat said, speaking on the condition of anonymity about the prospect of defeat for the bill.

Such calculations are especially critical now that Israel is
renegotiating its aid package, with the hopes of increasing the $2.4 billion it
receives annually from the United States by half a billion dollars. And the
debate over foreign aid comes as some Democrats are also beginning to question
whether the United States should be doing more to support moderate Palestinians
as they battle with Hamas and seek to negotiate with Israel.

The first test of how to deal with Democratic challenges to
the aid package came just a week after the House vote when the Senate
Appropriations Committee considered its own funding measure.

Democrats who spoke off the record said Leahy is among several lawmakers
in their party who generally support Israel, but is not necessarily as
committed to funding for the Jewish state as pro-Israel groups, led by the
American Israel Public Affairs Committee.

Leahy also managed to put into the Senate bill a provision
ending a 13-year-old ban on U.S. diplomats meeting Palestinians in Jerusalem,
once considered a critical bulwark against recognizing Palestinian claims to
the city.

“The committee felt that our diplomats should be in a position to make
their own judgments about where they meet and what they are able to discuss with
anybody in any country,” a Leahy aide said.

Observers said some committee members were not aware of the language and that it may be challenged when it
comes before the full Senate.

Some Democrats worry that more of their own will feel more
comfortable breaking with the pro-Israel lobby on various points, blaming what
they describe as the failure of AIPAC to speak out against the Republican
leadership for instructing members to oppose the foreign operations bill.

“Republicans have turned around and said ‘Israel? Um,
not so much,’ ” one Democrat said. “If some in our caucus think this
isn’t the third rail, there are Democrats who can say ‘not so much.’ “

The Democrats being discussed are not the ones on the margins who are well
known for their criticism of the U.S.-Israel relationship, such as the Quixotic
perennial presidential peace candidate Dennis Kucinich, an Ohio congressman, or U.S. Rep. Neil Abercrombie of Hawaii.

Instead, the potential defectors are lawmakers who at times have voiced
moderate, cautious criticisms of Jerusalem’s actions but until now
have voted in favor of funding for Israel. They include the chairman of the
appropriations committee, Rep. David Obey of Wisconsin, as well as Reps.
Betty McCollum of Minnesota and David Price of North Carolina.

Democrats who spoke to JTA stressed two points: The Democrats in question are
not beyond suasion; it’s less a matter of having lost them on the funding issue
than having to spend a little extra time and energy winning their support.

In some cases, potential Democratic objections to foreign aid might have
nothing to do with Israel. Some “Blue Dog,” or conservative,
Democrats trend isolationist and want to redirect foreign funds stateside.
Other Democrats want to register protest votes against what they believe is
America’s underfunding of Africa and other impoverished regions.

Finally, regaining both houses of Congress for the first time since 1994 has led
many Democrats in power to reassess congressional priorities, including Israel.

In the Senate, all eyes are focused on Leahy. According to observers, Leahy
last week attempted to introduce a 0.1 percent levy on defense grants that
would be spent monitoring how the allocations were spent.

The concern: Making certain that the United States does not end up funding
human rights abuses, a cause Democrats, particularly Leahy, have favored since
the Iran-Contra scandals of the 1980s.

The problem: Even 0.1 percent amounts to a considerable chunk – $2.4
million – of the $2.4 billion Israel receives in defense cash from the United
States.

The outcome: Israel, Egypt and Colombia were exempted from the across-the-board
levy. Pro-Israel lobbyists made sure committee members knew that oversight was
already written into Israel funding, suggesting that any additional spending on
monitoring would be gratuitous.

Democrats involved in the back-and-forth said Leahy was receptive to exempting
Israel from the levy and other changes that strengthened Israel’s bid, and that
the exchanges were always amicable.