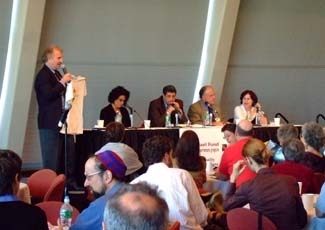 NEW YORK (JTA) – When Hassan Jabareen got up to speak at the New Israel Fund’s forum this week on a “Progressive Vision for Israel,” he immediately put to rest any suspicions that the NIF is shielding its U.S. donors from the political views of its grantees in Israel.

When Israel will celebrate its 60th birthday next year, declared Jabareen, founder and director of Adalah: The Legal Center for Arab Minority Rights in Israel, “We Palestinians will mark 60 years of the Nakba” – the “catastrophe.”

Recalling being asked by other Arabs why Palestinian citizens of Israel – Israeli Arabs – never took up armed struggle to protest the denial of their rights in the Jewish state, Jabareen spoke bluntly.

“I think one of the problems of Palestinians in Israel is we didn’t fight,” he said. “We didn’t fight the occupation seriously.”

Jabareen is director of one of a host of NIF-funded Israeli-Arab groups that critics – most notably NGO Monitor, a hawkish pro-Israel watchdog organization – say promote anti-Israel positions.

“This is not about making Israel a better society; it’s about denying the legitimacy of Israel to exist,” Gerald Steinberg, director of NGO Monitor, told JTA.

Steinberg says the NIF is not up front with donors about its support for such groups and lumps them together under the broad category of civil rights groups. He has called on the NIF to provide greater “transparency, accountability and public debate.”

Officials at NIF, which raises some $25 million annually for organizations ranging from women’s rights groups and Ethiopian-Israeli cultural societies to pluralistic Orthodox organizations and Arab rights groups, say their funding processes are a model for transparency. Steinberg’s real problem is the NIF’s ideology, not its procedures, they say.

“The growing chorus of negativity is coming pretty much from Steinberg and his ideological allies on the right who are never going to agree with much of what we do,” said Naomi Paiss, NIF’s communications director. “They’re entitled to their opinion, and we’re entitled to our vision.”

If Sunday’s symposium in New York was any indication, NIF is pulling no punches about what its vision is.

And to judge from the reaction of the 300 or so people who showed up to the event, which kicked off a weeklong series of forums in cities all across the United States, NIF’s supporters applaud the organization’s activities.

They applauded after a short film about NIF’s activities that included a shot of the West Bank security barrier with graffiti that said “Welcome to the ghetto,” and they applauded after an Israeli Arab, Michael Mousa Karayanni, a law professor at Hebrew University in Jerusalem, delivered a speech in which he called for changing Israel’s flag and anthem.

Karayanni is one of the co-authors of a controversial 2006 document produced by Israeli Arabs called “The Future Vision of the Palestinian Arabs in Israel,” which calls for Arab cultural autonomy, Arab veto rights in some government decision-making, the elimination of Jewish character from the anthem and flag, and modifications to immigration laws to eliminate favorable treatment of Jews.

“We’re not going to take a position on the documents per se,” said NIF’s CEO, Larry Garber, in an interview with JTA. “Our position is we think it is constructive that a dialogue is initiated.”

Garber said that the NIF would continue to fund Arab rights groups like Adalah – even if they say or do things with which the NIF doesn’t quite agree.

“When you join a group, not everything is going to be something you like; you support the broad position,” explained Aviva Meyer, associate director of the NIF. “You don’t expect to agree with every position.”

Meyer’s remarks appeared to represent the sensibilities of many of those who came to the conference. Though they bristled at some of what they heard, several attendees said that because they believe in having an open dialogue on the issues, they will continue to offer support for the NIF and applause for the speakers that the group presents.

The NIF, Steinberg countered, is not really interested in providing open debate.

“They have refused any kind of offer for a dialogue,” he said. “Instead they want to convince their supporters that what they’re doing is above board and acceptable. I have not seen any forum to which they’ve invited critics.”

His claim is buttressed by the composition of panelists for one of Sunday’s sessions, titled “A Fine Balance: Human Rights and Security.” All were from human rights groups, including the moderator.

Noting the asymmetry, an audience member said, “We need some other arguments that balance it.”

“These forums are an opportunity to show the Diaspora Jews who we really are,” Paiss said. “We are a Zionist organization. We love Israel. We want to make it better, and we think that our focus better represents the real life on the ground for most Israelis than that of most organizations who think that any criticism or discussion of Israel’s problems are somehow delegitimization.”

Last month, the Ford Foundation announced its second $20 million grant to NIF in four years, to support civil society, human rights and social justice organizations in Israel. Most of the NIF’s funds come from American donors, including about $100,000 per year from Jewish federations, according to Bennett Samson, NIF’s director of institutional grants.

Steinberg said the federations should not be funding activities that he described as undermining the legitimacy of the Jewish state, such as those being undertaken by groups like Adalah, Mossawa, Sikkuy and other NIF grantees behind the Future Vision document.

The executive vice president of the Greater Miami Jewish Federation, which sends money to the NIF, said his federation’s support for the organization is earmarked for specific projects.

“I don’t really know enough about their general operations,” Jacob Solomon told JTA. “For our purposes, which is promoting the welfare of women and girls in Israel, they’ve been very solid partners, very reliable, and I think the grantees have benefited from their relationship.”

What the fight between the NIF and its opponents really comes down to is ideology, suggested the executive director of NIF’s operations in Israel, Eliezer Ya’ari. The battle, he said, pits “Israelis” who see Israel as a Middle Eastern state of all its citizens and Jews more interested in preserving the Jewish nature of the country, even at the expense of democratic principles.

“The challenge for the next 60 years,” he said, “is making Israel a part of the Middle East.”