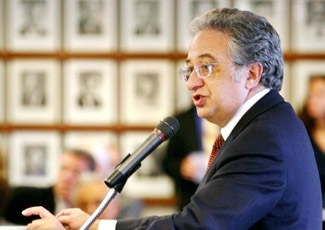 NEW YORK (JTA) – Robert Aronson already was pretty busy as the CEO of the Jewish Federation of Metropolitan Detroit and a consultant to several mega-philanthropists, including the billionaire owner of the Detroit Pistons.

As the top professional at the Detroit federation, a post he’s held for 18 years, Aronson manages a philanthropy and supporting foundation that allocate nearly $70 million per year. At the Steinhardt foundation – formerly known as the Jewish Life Network – Aronson will be advising a philanthropist who since quitting the hedge fund business 12 years ago has given away $125 million. Steinhardt also has helped launch landmark initiatives like birthright israel, a program that sends college students and young adults on short trips to Israel, and the Partnership for Excellence in Jewish Education, which issues grants to support day schools.

Aronson was quick to praise his predecessor at Steinhardt’s foundation, Rabbi Irving “Yitz” Greenberg, as “one of my guiding lights,” but the two men cut starkly different figures.

Greenberg, who quit the job last spring amid some acrimony, is best known as a trailblazing theologian, not a manager. Under his direction the foundation at times resembled a think tank. Aronson is seen less as a leading philanthropic thinker than a CEO who, Steinhardt hopes, can help focus and evaluate the success of his charitable giving, and improve efforts to forge partnerships with other philanthropists.

The hiring comes at a time when observers argue that the federation system – built on the model of a central authority determining how donations from thousands of donors will be distributed – is losing influence to ultra-wealthy philanthropists determined to control how their dollars are spent.

As the head of one of the largest federations and the top adviser to one of the most influential of these independent-minded philanthropists, Aronson now is in an almost unprecedented position to forge a formula for bridging these two charitable models.

Adding to the challenge is that Steinhardt is among the loudest critics of local federations and their national arm, the United Jewish Communities.

“When you work with a private individual you try to worry about what they want,” he added. “You don’t worry about process.”

Aronson is no stranger to dealing with major philanthropists. He is a longtime consultant to several donors in the Detroit area – notably Bill Davidson, the Pistons’ owner who has given away hundreds of millions of dollars, most recently a $75 million gift to the Hadassah Medical Center in Israel – and other prominent givers throughout the country, including Lynn Schusterman.

He already worked with Steinhardt, serving two years as chairman of birthright israel and overseeing his push to establish Areivim, a $100 million fund for transformative Jewish education projects that would be built through individual donations of $5 million from various major donors.

“I’ve chosen Bob because I have known him now for quite some time and think he is a superb professional,” Steinhardt said. “I worked with him on birthright, Areivim and on a number of other things. He has been extremely helpful, has excellent judgment and is someone whose professional judgment I respect and whose philanthropic orientation is largely in line with mine and whose integrity I can count upon.”

In an interview with JTA last summer, Steinhardt said that aside from funding for birthright, he thought that most of the money he had spent on projects during Greenberg’s tenure had been wasted. Steinhardt said that going forward he wanted to focus the bulk of his energy and resources on follow-up programs for young adults upon their return from birthright trips, the Areivim fund, and early childhood and informal education initiatives.

“My job is to help him set measurable goals and objectives for each of those areas, and not pie-in-the-sky goals that you cannot reach,” Aronson said.

“I think Michael wants to look for collaboration, that is why I am here,” he said. Steinhardt “wants to have a very clear picture of where his charitable investments are going, and rightly so.”

Aronson said his objective is to prove over the next year that he can handle both jobs effectively. Steinhardt, however, insisted that he wants to convince Aronson to leave the Detroit federation.

Both said Aronson’s experience in the federation world would help him run a private foundation. Several observers agreed, describing the switch as a natural progression.

“Federation execs understand some of the core elements that foundation founders are seeking, mainly planning, execution of that plan and partnership development,” said Jeffrey Solomon, who himself made the jump from being senior vice president and chief operating officer at the UJA-Federation of New York to being president of the Andrea and Charles Bronfman Philanthropies.

Gary Tobin, the president of the Institute for Jewish and Community Research, which studies Jewish philanthropic trends, predicted that over the next decade, more and more private foundations will snap up federation heads.

“You are looking for people with knowledge of the Jewish community who can work with major donors, and you want people who know how to manage an organization,” Tobin said. “It is a good choice for any foundation to pick up one of these guys.”