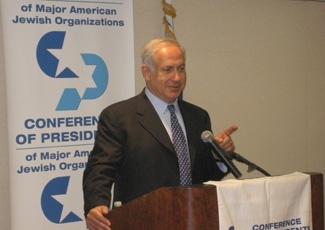 WASHINGTON (JTA) – The buildup to the U.S.-backed Israeli-Palestinian summit to be convened later this month in Annapolis, Md., has set off a flurry of lobbying efforts throughout the Jewish community.

A newly formed coalition of Orthodox and right-wing organizations dedicated to preserving Israeli sovereignty over all of Jerusalem held meetings last week in Washington with White House officials and members of both houses of Congress.

The Zionist Organization of America, one of the groups in the Coordinating Council on Jerusalem coalition, is spearheading support for a non-binding congressional resolution introduced this week that calls on Palestinian Authority President Mahmoud Abbas to renounce the charter of his Fatah party approved more than 40 years ago.

On the other end of the political spectrum, a triumvirate of dovish pro-Israel groups – Americans for Peace Now, Brit Tzedek v’Shalom and the Israel Policy Forum – is strongly backing the Annapolis meeting.

They see the summit, which is expected to be held under the aegis of U.S. Secretary of State Condoleezza Rice, as an opportunity to kick-start the long-dormant peace process.

The three organizations have lobbied hard for a letter to Rice initiated by U.S. Reps. Gary Ackerman (D-N.Y.), who is Jewish, and Charles Boustany (R-La.), an Arab American, that calls for increased assistance to the Palestinian Authority as a means of facilitating reforms.

The Ackerman-Boustany letter, which has garnered 87 signatures in the U.S. House of Representatives, is backed by the American Israel Public Affairs Committee.

AIPAC’s emphasis, however, is on another letter sent to Rice by U.S. Sens. Charles Schumer (D-N.Y.) and Lindsey Graham (R-S.C.) asking her to ensure the active participation of Arab nations at Annapolis.

The letter stated that “in the past, the lack of sufficient support from some of these Arab states have made it difficult to reach earlier agreements.”

Seventy-nine senators signed on before the letter was sent in early October.

AIPAC’s reasoning is that Abbas, weakened by the ouster of his loyalists from the Gaza Strip in June at the hands of Hamas, needs Arab political and financial backing now if he is to remain credible.

Some observers say the variety of approaches is the product of uncertainty over the participants, parameters and objectives of the conference.

“There’s no issue yet, there’s no proposal just yet,” said Malcolm Hoenlein, the executive vice-chairman of the Conference of Presidents of Major American Jewish Organizations.

His worry is that the vacuum could create unreasonable expectations among the Palestinians, and that disappointment could lead to violence.

Regarding the Palestinians, Hoenlein said, “The skepticism is, what are they capable of” in terms of making peace. Instead of negotiating endgame solutions at Annapolis, he said, the sides should focus on building up the Palestinian infrastructure and economy as a means of enabling Abbas and encouraging moderation.

Despite the many question marks regarding the Annapolis summit, it seems likely that the Israelis and Palestinians will tackle major issues – including Jerusalem.

This week, Israeli Prime Minister Ehud Olmert finally stepped out from behind proxies and declared that final-status issues would be addressed.

“Annapolis will be the jumping-off point for continued serious and in-depth negotiations which will not avoid any issue or ignore any division which has clouded our relations with the Palestinian people for many years,” he said at the annual Saban Forum in Jerusalem. Rice was in attendance.

If talk of dividing or sharing Jerusalem does come up, it appears that Olmert should expect strong protests, at least from some corners of the American Jewish community.

“The left has never had a problem advocating against Israel’s policies, and religious organizations have been more deferential to the government of Israel,” said Jeff Ballabon, a founder of the newly formed Jerusalem coalition told JTA.

Ballabon, who is active in Republican politics, joined fellow members of the coalition in the lobbying efforts in Washington last week. He intends to meet with Rice.

The watershed was another round of discussions aimed at Israeli concessions without evidence of Palestinian credibility in peacemaking and reports that Olmert still was ready to talk about sharing Jerusalem.

Ballabon said members of the coalition feel vindicated and inspired to speak out by the fallout from Israel’s withdrawal from the Gaza Strip, which has since fallen into the hands of Hamas and continues to serve as a base for rocket attacks on southern Israel.

The Jerusalem coalition features several organizations, including the Orthodox Union, that until now have been reluctant to tell Israelis how to handle security-related issues.

Nathan Diament, the director of the O.U.’s Washington office, described his group’s participation in the coalition as a natural evolution from other recent organizational decisions.

After the Gaza evacuation, the O.U., which represents hundreds of Orthodox congregations, resolved to speak openly against Israeli government decisions it opposed. Last year, at its biennial convention in Jerusalem, the group resolved to oppose any attempt to divide the city.

Diament said the idea was not to confront the Israeli government down the road – but he would not count out the possibility of an eventual clash.

“We’re hoping to change the Israeli government’s mind – that would be the best result,” he said, noting that his office had just launched a “Defending Jerusalem” Web site.

In addition to fighting on the Jerusalem issue, the ZOA is pushing hard for the congressional resolution – introduced by U.S. Rep. Roy Blunt (R-Mo.), the minority whip in the House of Representatives and U.S. Rep. Shelley Berkley (D-Nev.), a prominent Jewish Democrat – calling for the abrogation of the Fatah charter. Palestinian officials say the charter has long been overridden by subsequent Fatah documents.

But support for ZOA’s position is gathering support among Jewish groups, Hoenlein said. His Presidents Conference is the community’s main umbrella organization on foreign policy matters.

Hoelein told JTA that he has canvassed member groups and said support for the ZOA position is “overwhelming.”

Ori Nir, the spokesman for Americans for Peace Now and director of its campaign backing the Annapolis effort, said groups focusing on minutiae like the Fatah charter are missing the bigger point.

“Instead of examining documents that are more than 40 years old,” Nir said, “it’s time for American Jews to help the prime minister of Israel’s push for peace rather than seek ways to hinder his efforts.”