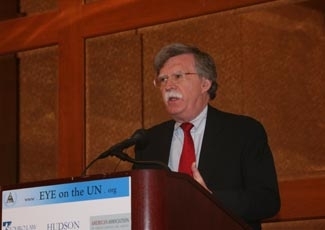 John Bolton, former U.S. ambassador to the United Nations, at a conference in New York on Nov. 18, 2007, said Israel often takes the heat intended for the United States. (Courtesy of Anne Bayefsky)
Advertisement

NEW YORK (JTA) – At a conference billed as a “historic” challenge to the demonization of Israel by the United Nations, the most sympathetic comments about the world body came from a most unlikely source.

Carmon said the United Nations had done a “relatively good job” in helping funnel humanitarian assistance to the Palestinians. On Iran, Carmon added that while U.N. efforts are not “a definite process” that would compel the Islamic Republic to change its ways, the process is nevertheless valuable.

He even had kind words for the United Nations Relief and Works Agency, the U.N. agency that services Palestinian refugees, which critics charge has abetted terrorism and serves mainly to perpetuate rather than resolve the refugee crisis.

In some respects, Carmon said, UNRWA “is helpful.”

The tone of Carmon’s comments was largely out of step with other speakers at the conference, held at a hotel opposite U.N. headquarters on Manhattan’s East Side.

Over the course of nine hours, a procession of diplomats, congressional representatives, lawyers and Jewish activists laid out a scathing indictment of the United Nations. Often in redundant detail, they described the extent of U.N. corruption in its treatment of the Jewish state.

Anne Bayefsky, a human rights lawyer and senior fellow at the Hudson Institute, which co-sponsored the conference, noted in her opening remarks that the travails of Jewish history had made human rights the “cri di coeur,” or “cry of the heart,” for the Jewish people.

“It is not surprising therefore that the project of the United Nations was a source of inspiration to a generation of Jews and has commanded allegiance from Jewish leaders active across the human rights movement,” Bayefsky said. “I am therefore profoundly regretful to be forced to conclude that the U.N. human rights system has been irrevocably hijacked, corrupted and lost to those who stand the most to gain from its demise.”

Though speakers drew from an extensive repertoire of singular negative treatment of Israel by various U.N. bodies, much attention was directed to the area of human rights, where Israel has typically been a subject of overwhelming scrutiny.

Just days before the conference, a U.N. General Assembly committee endorsed the report of the world body’s Geneva-based Human Rights Council, which includes a plan to make Israel the subject of its own agenda item at the council’s yearly meetings.

Established in 2006 as a replacement for its discredited predecessor, the Commission on Human Rights, the council was envisioned as a reformed and improved body – a notion mocked repeatedly at Sunday’s conference.

McCotter called for free countries to diminish their participation in the world body and instead direct their resources toward a Liberty Alliance, a caucus of nations where membership would be conditional on meeting certain standards of political and civil freedom.

“In many instances it serves as a surrogate for the United States for people who, for whatever reason, are afraid to criticize the United States,” Bolton said. “Criticizing Israel is almost as much fun.”

U.S. Sen. Norm Coleman (R-Minn.) called the treatment of Israel by the United Nations an “abomination” and pledged to use financial pressure to compel changes within the organization. In 2006, the United States provided 22 percent, or $423 million, of the U.N. budget. Israel contributed about $9 million.

The stridency of some criticism made some representatives of Israel’s U.N. mission blanch, but they appeared to be in the minority of those in attendance.

Malvina Halberstam, a specialist in international law at Yeshiva University’s Cardozo School of Law, said Carmon’s comments were “so diametrically different from those by Ambassador Bolton.”

“It’s a sad comment that the only one who seems to find positive things to say about the U.N.’s treatment of Israel is the Israeli representative to the U.N.,” Halberstam said.

Asked about Carmon’s comments, Bayefsky asserted that the conference was supposed to focus on the U.N.’s human rights record on Israel and that Carmon had strayed from the topic. She noted that Itzhak Levanon, Israel’s representative to the Human Rights Council in Geneva, was far less charitable toward the United Nations in his remarks at the conference.

“Obviously Ambassador Carmon was not at liberty to speak his mind,” Bayefsky told JTA. “What can I say?”

Carmon, who along with Levanon were the only two speakers representing governments, said he was aware that not everyone approved of his remarks.

He added that there are areas in which Israel can work with the United Nations to advance its interests.

“The people in this hall were very dedicated, very positive to Israel,” Carmon told JTA. “But I felt it would be honest and right while talking to them to give an overall picture, the bad and the good, the positive and the negative. My idea was not to blend with some kind of party line.”