New roles for women in Orthodoxy 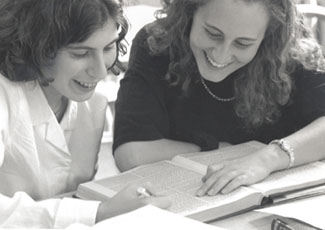 Women study at an international conference on feminism and orthodoxy in New York. (Courtesy of the Jewish Orthodox Feminist Alliance)
Advertisement

NEW YORK (JTA) – When Dina Najman was hired last year to lead Kehillat Orach Eliezer, a traditional Orthodox-style congregation, it was hailed as a major, if controversial, step forward for the status of women in Orthodoxy.

Barely a year later Kehillat Orach Eliezer – an unaffiliated congregation that meets in a Manhattan youth hostel – is pondering its future.

Attendance has been dwindling – members say they have lost worshipers to the suburbs or more liberal prayer communities – and the congregation may decide this month to vote itself out of existence.

Still, the progression of women’s leadership within Orthodoxy, in which Najman was an early pioneer, not only has grown but won sanction from the movement’s establishment institutions.

Two venerable Orthodox synagogues in Manhattan have hired graduates of an advanced women’s Talmud program at Yeshiva University to posts that afford them many of the public responsibilities traditionally reserved for rabbis.

In one case, Congregation Shearith Israel, commonly known as the Spanish-Portuguese Synagogue, decided recently not to hire a new associate rabbi, instead giving many of those responsibilities to Lynn Kaye, a program graduate.

“I think that my hiring is good news because it reflects one congregation’s willingness to allow women to contribute to Jewish life and to the community as well,” Kaye, 26, told JTA. “There are many women who would love to serve the Jewish community, and I wish there were more opportunities for them to do that.”

The hiring of women to leadership roles at Orthodox congregations is not without precedent. At least four U.S. Orthodox synagogues have placed women in staff positions dealing principally with education and pastoral care rather than ritual roles like leading services.

But the arrival of women at such Modern Orthodox mainstays as Shearith Israel and the Jewish Center in Manhattan, which recently hired a woman to a two-year post as resident scholar, and the support they enjoy from the flagship institution of Modern Orthodoxy, marks the phenomenon’s transition from the Orthodox fringe to the mainstream.

“It’s really a huge change,” said Robin Bodner, executive director of the Jewish Orthodox Feminist Alliance. “We’re witnessing the emergence of one of the most exciting phenomena in the Modern Orthdox community today – that of capable, learned women taking on significant spiritual leadership roles. And it’s a progression from the more liberal periphery to the more conservative center.”

Though their precise responsibilities vary, the positions women are carving out for themselves within Orthodox synagogues tend to focus on education. Some deliver sermons on Shabbat mornings before the entire congregation and provide counseling or spiritual guidance. None lead services or read from the Torah.

A generation ago, efforts to offer greater opportunities for women in Orthodox synagogues centered on separate women’s prayer groups, a movement that appears to have lost momentum in recent years. Rising in its stead have been so-called partnership minyanim in which women play certain limited roles – often including reading from the Torah – in an otherwise typical Orthodox service.

Filling paid leadership positions in established synagogues, it is widely agreed, represents something else entirely.

“This is something whose time has just come,” said Rabbi Shmuel Hain, the academic head of the Graduate Program for Women in Advanced Talmudic Studies at Yeshiva University, the two-year post-collegiate program of intensive study completed by the recent hires at Shearith Israel and the Jewish Center.

“Rabbis and lay leadership have begun to realize that it will enhance their synagogue programming and ability to relate to all types of people if they hire qualified scholarly women in these kinds of positions,” he said.

Inevitably, women like Kaye fuel speculation that Orthodox ordination of female rabbis might be nearing. It’s an issue on which even progressive leaders tread with extreme caution.

“That’s not on our radar screen,” said Hain, when asked if his program saw female ordination as an objective.

As if reading from an admissions brochure, Hain restated the program’s goal of training “an elite cadre of female scholars of Talmud and halachah to act as leaders and role models in Orthodox Jewish communities.”

Rachel Kohl Finegold, the programming and ritual director at the Orthodox Anshe Sholom B’nai Israel Congregation in Chicago, says that placing women in leadership positions is a worthy end in itself. And while she doesn’t believe the trend represents an end point, Finegold worries about her career prospects after she leaves her current position.

“I don’t think we’ve arrived,” she said. “The reality of my situation is that in X number of years, when I want to move on to whatever the next logical step would be in my career, there is no next logical step. It’s what some of us call the ‘glass mechitzah.’ “

If Sara Hurwitz has her way, that soon may change.

Hurwitz, the madricha ruchanit, or spiritual mentor, at the Hebrew Institute of Riverdale in the Bronx, already considers herself to function in much the same role as a rabbi. She delivers sermons on Shabbat, provides counseling and guidance in matters of Jewish law, and has co-officiated at a wedding with a male counterpart.

“I think that in the Orthodox community, the role has to still be slightly distinct, and the title reflects that,” Hurwitz told JTA. “I think there are very few differences. I think generally we function on a day-to-day basis in the same way.”

Hurwitz, who has been in her position for four years, shortly hopes to take on the title of morateinu, Hebrew for “our teacher.” The change is a reflection of her completing eight years of intensive study – two at the Drisha Institute, a pioneering institution for advanced women’s Torah study in New York, and six under the guidance of the Hebrew Institute of Riverdale’s rabbi, Avi Weiss.

She further plans to start an association for women in similar roles in the hopes of inspiring others to follow their lead.

“My hope is to professionalize women who find themselves in ritual leadership, and create an umbrella organization where the few of us who are already in these roles can come together and learn from one another, be a resource to one another,” Hurwitz said, “as well as just galvanize what we’ve been doing and show the next generation that being a woman in a position of ritual leadership is an option.”