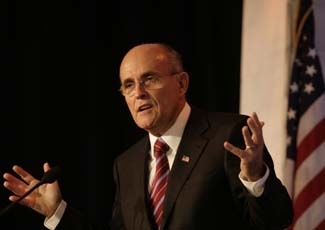 WASHINGTON (JTA) – Rudy Giuliani’s admonition in 2004 to Jews who favored President Bush’s tough foreign policy but balked at his social conservatism was prescient:

“You’re never going to find a candidate you agree with completely,” Giuliani said at a Republican convention event sponsored by the American Israel Public Affairs Committee and the United Jewish Communties. “You’ve got to figure out what’s important.”

He might have uttered the same words this year – not to U.S. Jews, who give him high favorable ratings, but to conservative Republicans.

Giuliani once was the leader of the Republican pack because he was seen as the likeliest to win over independents and conservative Democrats. Now the former New York City mayor has fallen behind in his presidential quest, having staked his hopes for success in the bigger states with later primaries.

One thing Giuliani’s campaign does not want to hear now is how their man is a moderate who can cross party lines.

That could explain why last fall, when an American Jewish Committee poll named Giuliani the most popular Republican candidate among U.S. Jews, his campaign refused to return multiple calls. The last thing he needed was an endorsement from a community that trends liberal more than any other, and that favors abortion rights and gay marriage.

The campaign has long been wary of pushing Giuliani as a moderate. When it cannot avoid Giuliani’s record, the campaign casts it as conservatism.

Addressing his backing for gun control, for example, his Web site frames it as a tough-on-crime posture: “To deal with a city where crime was out of control, Mayor Giuliani worked to get guns out of the hands of criminals – resulting in a 66 percent drop in the murder rate and 72 percent reduction in criminal-related shootings. The best way to deal with gun crime is to prosecute the criminals and enforce the laws already on the books.”

Prior to Giuliani’s appearance at a Republican Jewish Coalition candidates’ forum in October, aides suggested he would not play the moderate card with its most natural audience.

Instead, Giuliani emphasized his security credentials and his tough talk on Iran. Mocking Democrats who opted to negotiate, Giuliani said, “Here’s what Ronald Reagan did before he negotiated with the communists: First, he called them the ‘Evil Empire.’ “

Then, he said, Reagan put missiles “in European cities, and he pointed the missiles at Russian cities with names on them. And then he said, in his very nice way, ‘Let’s negotiate.’ “

Not that de-emphasizing his moderation and playing up his foreign policy attributes have hurt him with U.S. Jews. The AJC poll gave him 75 percent approval ratings among Jewish Republicans and 41 percent approval overall – making him the second most popular candidate overall behind U.S. Sen. Hillary Rodham Clinton (D-N.Y.)

Sheldon Adelson, the country’s third richest man, introduced him at the RJC forum and has lent out his plane for campaign purposes.

At the forum, Adelson also didn’t spend much time on domestic issues, instead reminding the audience of Giuliani’s two marquee pro-Israel acts as mayor: ejecting then-Palestinian leader Yasser Arafat from a Lincoln Center concert in 1995, and returning Saudi money given in the wake of the Sept. 11, 2001 terrorist attacks after the donor blamed the attacks on America’s pro-Israel policies.

“Now that’s moral clarity,” Adelson said. “Mayor Giuliani not only said the right things about Israel, which is easy to do, but he took the right actions as well.”

It helps that Giuliani has surrounded himself with some of the leading Jewish lights of the neoconservative movement as advisers, including Daniel Pipes, Martin Kramer, David Frum and Norman Podhoretz.

At the RJC event, Giuliani didn’t entirely duck his moderate record, alluding to it, albeit opaquely