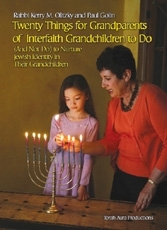 SAN FRANCISCO (JTA) – Bettina Kurowski is the chair of the 2008 fund-raising campaign of the Jewish Federation of Los Angeles and active in her Conservative synagogue.

She’s also a grandmother of three young grandchildren. They give her great “naches,” or joy, she says, but she’s also worried – the children’s father is not Jewish, the kids are being raised in an interfaith home and Kurowski, for all her Jewish involvement, is not sure what role she should play in passing on the Jewish heritage that is so dear to her.

“My husband and I are the keepers of the Jewish tradition, the culture and values of Judaism – what it really means to be a Jew,” Kurowski says. “I took it upon myself to study how to be the best grandparent I could be while acknowledging the non-Jewish side of their family.

“I didn’t want to give the children the sense that there’s something wrong with people who are not Jewish, but I still want to give them a sense of pride in being Jewish. It’s a fine line.”

Looking around, Kurowski found few resources for grandparents like herself. She says she’s the only one in her circle of friends whose children intermarried, and she felt the need to share her concerns with others in her situation.

This week, she’ll get that chance when the Grandparents Circle holds its first meeting at Valley Beth Shalom, Kurowski’s congregation in Encino, Calif.

The Grandparents Circle, which is launching pilot courses Jan. 8 in Los Angeles and Jan. 29 in Atlanta, is a new program created by the Jewish Outreach Institute to help grandparents present their Jewish heritage to their grandchildren in intermarried households.

Grandparents meet in groups of 20 to 25 for five weeks of guided discussion, share their concerns and learn specific skills for passing on Jewish history and tradition without forcing it on the children.

“They want to pass on their Jewish identity and background, they want to share their history and who they are with their grandchildren, but it has to be done in a way that’s interesting to the grandchildren,” says Liz Marcovitz, a program officer at the institute. “You can’t just start talking about Judaism with no context.”
The course is inspired by “Twenty Things for Grandparents of Interfaith Grandchildren to Do,” a 2007 JOI publication.

When Kurowski read the book last year, she and her husband donated the funds to build a curriculum around it. Her federation has earmarked funds to run the pilot course, and Kurowski says it hopes to expand the course to other synagogues in the Los Angeles area.

Marcovitz says the Jewish communities of Chicago and Hartford, Conn., among others, are interested.

Eventually the JOI plans to set up a national listserve for all such grandparents, whether they have taken the course or not.

Suzette Cohen is organizing the program in Atlanta. She notes that the city’s Jewish community, which has a 60 percent intermarriage rate, is in its sixth year of running The Mothers Circle, a JOI support group for non-Jewish women raising Jewish children. Many of the Jewish parents of those intermarried couples have asked for a similar program for them.

“They often dance around the issue, afraid of doing or saying the wrong thing” and offending their child or the non-Jewish spouse, Cohen says.

The first Atlanta circle is already oversubscribed; a second group is filling quickly.

The gist of the book and the course is to teach by example: Invite the grandchildren to Passover seders in your home, show them photos of your family, light Shabbat candles and tell them why it’s important to you.

Build “layers of Jewish memories,” the book suggests, that will remain with the children as they grow to adulthood.

Grandparents are an often overlooked influence on the lives of their grandchildren, says JOI’s associate director, Paul Golin. The institute’s extensive research on the adult children of intermarried couples found that one of the major influences on the religious identities of these young adults was their grandparents.

But it’s not a straight shot.

“It’s not about parenting, it’s about influence,” Golin says. “It happens holistically. If the grandparents are just who they are and have contact with the grandkids, they’ll have that influence.

“That’s why we say, just be the best Jew you can be. You don’t want to come across as a Hebrew school teacher.”

The Grandparents Circle is designed for Jewish grandparents whose intermarried children are open to it. If the grandchildren are being raised exclusively Christian, Golin notes, it is a much more delicate matter.

That’s the situation facing Rose Sowadsky, an Atlanta-area grandmother whose two grandchildren are being raised Methodist.

The children “are aware” she is Jewish – they were at her home Christmas Eve and saw she had no tree – but they have never asked her about it.

“They must have been well prompted at home,” she supposes.

Sowadsky does not expect to have any influence on her grandchildren’s religious upbringing, but she signed up for the Grandparents Circle for moral support.

“I want to see how others cope with it,” she says.

Many participants come to the group as couples, and many others are single women, usually widowed, like Sowadsky, or divorced.

Dr. Bob Licht, a semi-retired Los Angeles dentist, is the lone single man in the Los Angeles group. When his wife of 62 years passed away last summer, he felt he needed help passing on his Jewish heritage to his 4-year-old great-grandson.

The boy’s father, Licht’s grandson, is Jewish, but the boy’s mother is not. Licht says his children and grandchildren, including the boy’s father, received an appreciation and understanding of Judaism from him and his late wife.

Now that she is gone, Licht feels somewhat adrift. The boy had a brit milah, but Licht wants to make sure he continues on a Jewish path.

“I wish my wife were here to help me with it,” he says. “She was better prepared. Now I’ve got to figure it out. I want to learn as much as I can, and that’s why I went to the first meeting. I want to do the right thing.”