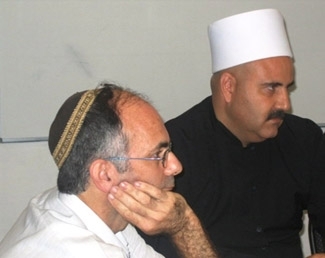 An Arab and a Jew participate in a program sponsored by The Abraham Fund, a non-profit organization that supports grassroots co-existance between Israel's Jewish and Arab citizens. (Courtesy of Abraham Fund)
Advertisement

They remain committed to the cause of civic equality, but are being confronted with Arab rejection of Israel as a Jewish state.

This month, when the Inter-Agency Task Force on Israeli Arab issues organized a trip for members to showcase the difficulties facing Arab Israelis, the leader of the Ittijah umbrella group of Arab Israeli nongovernmental organizations called on Arab Israelis to boycott the visit because of ideological differences with the Jews.

While the boycott call by Ammer Makhoul went largely unheeded and was condemned by some prominent Arab Israeli leaders, it underscored the growing sense of unease between increasingly confrontational Arab Israeli groups and the Jewish funders that support them.

Tensions in Israel between the Jewish establishment and the Arab sector have been rising since the riots of October 2000, when Israeli police opened fire on Arab Israeli protesters as they demonstrated in solidarity with Palestinians who had just launched the second intifada. Thirteen were killed.

More recently, signs of rising friction included documents published by Arab Israeli leaders calling for an end to Israel as a Jewish state and the recent announcements by Arab leaders that they will not take part in upcoming celebrations for Israel’s 60th anniversary.

Arab community leaders also are waging a campaign against government plans to increase the number of Arab volunteers for Israel’s civil service – an initiative the government says would increase Arab-Jewish integration. And ahead of the recent Israeli-Palestinian Annapolis peace conference, Arab Israeli leaders successfully lobbied the Palestinian Authority not to recognize Israel as a Jewish state.

“There is a strain,” said Sammy Smooha, a Haifa University sociologist who researches the Arab community in Israel.

As a consequence, he said, some Jewish groups that support Arab Israelis are being forced to explain their positions to concerned donors.

“There are discussions in the Jewish foundations, but they have not changed their policies yet because they believe that if you give money, you strengthen Israeli society’s chances for coexistence,” Smooha said. Whereas “if you discontinue funding, than you risk radicalization.”

For many, the precipitating event that brought the debate to the fore about whether or not Jewish groups should support Arab Israelis was the publication in 2006 of a document titled “The Future Vision of Palestinian Arabs in Israel.”

That document by several prominent Arab Israeli leaders and academics described Israel as an undemocratic enterprise that systematically discriminates against its non-Jewish citizens.

It called for Arab cultural autonomy, Arab veto rights in some government decision-making, the elimination of Jewish character from Israel’s anthem and flag and modifications to immigration laws to eliminate the favorable treatment of Jews.

Makhoul said his call to boycott this month’s visit of the Jewish-Arab task force was part of that sentiment. He said it’s hypocritical for Arab Israeli groups to enjoy support from U.S. Jewish groups when those same groups support a “Zionist agenda” in which Jews are the main power in Israel.

“We should be clear and honest and not make life easy for Israel, but instead challenge the Israeli system as it is,” Makhoul told JTA.

While support from American Jews “looks positive, it is in fact a delegitimization of our struggle,” he said. “Part of doing this is to struggle against this kind of interference.”

Shawki Khateeb, the chairman of the National Committee for the Heads of Local Arab Councils in Israel and a member of the steering committee that produced the “Future Vision” document, rejected the boycott.

“We have met and will continue to meet with Jewish figures,” Khateeb said. “We have our red lines, but we are obligated to say what we think and explain our position to whoever wants to hear.”

Rabbi Brian Lurie, the president of the Alfred and Hanna Fromm Fund, a former executive vice president of UJA and the founder of the task force, said Makhoul does not represent mainstream Arab Israeli opinion and that he was encouraged by the Arabs’ rejection of the boycott.

“We were here having an educational experience,” Lurie said. “We had three days of pure study – no political activity and no advocacy. We were learning about issues of education, social services, health and leadership to better understand minority-majority relations.”

Arab Israelis complain of facing discrimination in a range of areas, including housing, education, employment and land ownership. Many describe themselves as second-class citizens.

Although Jewish philanthropy for Arab projects in Israel once was considered the purview of the left wing, it has gone mainstream, say the pioneers of Jewish support for Arab Israeli causes. They noted that the Jewish-Arab task force includes representatives of the Anti-Defamation League, the American Jewish Joint Distribution Committee, Jewish federations and family foundations, including the Andrea and Charles Bronfman Philanthropies.

“More and more communities are buying in, and it seems they understand the importance” of supporting the Arab-Israeli community, said Amnon Be’eri-Sulitzeanu, director of The Abraham Fund, one of those pioneers. “It now seems to be easier to convince people that Israel supporters should invest effort and funding on the agenda of integration and equality.”

The “Future Vision” document, however, has complicated matters somewhat.

Jessica Balaban, who heads the task force’s office in New York, said members have called her to express concern about the document and other Arab Israeli calls for ending Jewish hegemony in Israel.

“We are aware of the documents – we don’t take them lightly – but we remain focused on the area of civics,” Balaban said.

Eliezer Ya’ari, the executive director in Israel of the New Israel Fund, said the “Future Vision” document gave pause to some donors of NIF, which as the largest supporter of Arab-Israeli nonprofits and coexistence projects, funds some of the groups behind the document.

“Many of us were quite concerned and hurt by the kind of language used there, but there is altogether something interesting when you look at it from outside: Creating vision papers is a countermove to what Ittijah is doing,” Ya’ari explained.

Ya’ari said the authors of the “Future Vision” document are saying, “Yes, we are Israeli, we accept it, we accept the State of Israel and now we would like to discuss what our future is going to be there.”

The document caused “anger and frustration,” he acknowledged, but said only two or three donors dropped their support for NIF as a consequence.