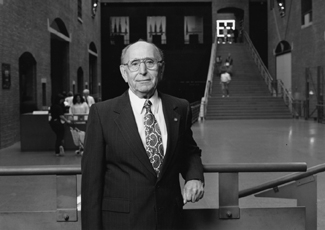 NEW YORK (JTA) – Miles Lerman helped found the U.S. Holocaust Memorial Museum, and for three decades was a vital contributor to its success.

Lerman, the museum’s chairman emeritus, died Tuesday at his home in Philadelphia. He was 88.

A Holocaust survivor and partisan fighter during World War II, Lerman was involved with the Holocaust museum almost from its inception.

President Carter appointed him to an advisory board of the president’s Commission on the Holocaust, which recommended creating the museum in Washington. Lerman was subsequently appointed to the governing council by three American presidents and served for a total of 23 years.

Lerman served as museum chairman for most of its first decade. In early 2000, he informed President Clinton that he was stepping down from the post.

Lerman is credited with leading the early fund-raising efforts and negotiating international agreements that helped the museum acquire artifacts for its permanent exhibition.

His initiative also led to the creation of the Miles Lerman Center for the Study of Jewish Resistance, a part of the museum’s Center for Advanced Holocaust Studies.

“Miles taught his successors the meaning of memory,” said Fred Zeidman, the museum’s chairman. “Those of us who follow in the path he forged owe him a debt of gratitude and bear a tremendous responsibility to carry on his legacy.”

Lerman was born in Tomashov, Poland, in 1920. In 1942 he escaped from a slave labor camp after killing his guards with a shovel. Lerman went on to join a resistance group formed by other escapees, and for the next two years waged a guerrilla campaign against the Nazis.

“Our job was to raise havoc, to raise hell with them and survive,” he once told The Philadelphia Inquirer.

In June 1944, Lerman was liberated by the Soviet army and returned to Poland. He and his wife, Chris, also a survivor, immigrated to the United States in 1947 and settled in Vineland, N.J., where Lerman became successful in the home heating oil business.

By the time Lerman stepped down as chairman of the Holocaust museum, it had grown into a major Washington tourist stop, having attracted some 14 million visitors in its first six years of operations. The overwhelming majority were non-Jews.

That figure has grown today to more than 25 million, including more than 8 million students and 85 heads of state, according to the museum Web site, which itself drew 15 million visits in 2006.

While Lerman is credited with much of this success, he also was the target of much criticism.

Lerman came under fire in 1998 for inviting Palestinian leader Yasser Arafat to visit the museum, an episode that became a public relations disaster and ultimately claimed the job of the museum’s director, Walter Reich.

The same year, the museum became embroiled in another controversy after John Roth, a philosophy and religious studies professor, resigned just weeks after his appointment to direct a department of the museum.

Critics blasted the museum and Roth for an article he wrote in the Los Angeles Times a decade earlier, charging that Roth had made an inappropriate analogy between Israel and Nazi Germany. The museum accepted Roth’s resignation with “deep regret,” and later invited him to be a visiting scholar during the 2004-05 academic year.

Besides the museum, Lerman was involved in the construction of a memorial in Belzec, Poland, where some half-million Jews were murdered, including members of Lerman’s family.

The American Jewish Committee, which spearheaded the project along with the Polish government, issued a statement Wednesday saying it “will be forever be in his debt for the care, wisdom, and solemnity with which he guided our efforts.”

Lerman is survived by his wife; two children, Jeanette and David; five grandchildren; six great-grandhildren; and a brother. A funeral service is planned for Thursday in Philadelphia.