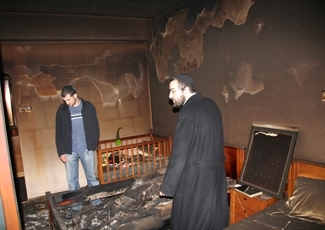 MOSCOW (JTA) – Rabbi Nochum Tamarin doesn’t like to talk about what happened to him last year on a street in Ukraine. Enough has been written about the Zhitomir attack, he says, and besides, last year already is long gone.

Pressed, however, Tamarin opens up a bit, and it is apparent that the incident, in which he and his wife were set upon and beaten by thugs, still affects him and his family.

The attack on Tamarin, a Chabad emissary, was one of a string of anti-Semitic attacks in Ukraine late last year that shook local Jewish communities.

To some, the violent episodes in Sevastopol, Odessa and Uzhgorod, where a local Chabad rabbi’s house was burned, made it seem as though anti-Semitism was aggressively on the march in the birthplace of the pogrom. Theories differ about the violence, however.

The Eurasian Jewish Congress, which runs the most respected program monitoring anti-Semitism in Ukraine, says that anti-Semitic attacks did not spike in 2007. The Chabad-led Federation of Jewish Communities of Ukraine says the statistics it has been keeping as part of a new program show an increase.

Whether or not the attacks constituted a surge in violence, it is clear they left Jews in Ukraine – particularly its most visible members, the Orthodox – more concerned about their safety than at any other time in recent years.

“I’ve met people in Odessa, Jews that are very established and feel comfortable, and they are afraid,” said Mayer Stambler, the chairman of Chabad’s federation. “The situation over there is very serious.”

The Eurasian Jewish Congress’ report on anti-Semitism in Ukraine in 2007 details the incidents that have led to a sense of anxiety and siege among Ukraine’s Orthodox Jews. The incidents range from the distribution of anti-Semitic leaflets by MAUP, a notoriously anti-Semitic publishing house and business school, to the beating of a rabbi in Sevastopol.

But Eurasian Jewish Congress program director Vyacheslav Likhachev was careful to note that the report showed no more attacks in 2007 than in 2006 or 2005.

“We are the ones who really feel the attacks,” Stambler countered, “and the rabbis feel uncomfortable walking outside.”

One major reason for the disagreement over the numbers stems from the difficulty in collecting accurate data on hate crimes in Ukraine.

According to the 2007 country-by-country Hate Crime Report Card published by Human Rights First, Ukraine collects no data on hate crimes. Not a single person has been convicted under the country’s hate crimes statute in its post-Soviet history.

After Ukraine’s president, Victor Yuschenko, was criticized last fall for his government’s lackluster response to the attacks, he met with Jewish leaders and said he ordered the Ukrainian Security Service to establish a special department to combat hate crimes. He also proposed a bill to criminalize the denial of the Holocaust and Ukraine’s famine of 1932-33, known as Holodomor.

But with a Ukraine beset by domestic crises that have toppled three governments in three years, Jewish observers say they are not optimistic about action.

Despite public moves like the appointment of a hate crimes ombudsman, the government seems either unwilling or unable to combat anti-Semitism and xenophobia, Jewish observers said.

“I would like to see them do more to fulfill the commitments they’ve made,” said Mark Levin, executive director of NCSJ, which advocates for Jews in former Soviet republics.

After meeting with government representatives in Kiev in the wake of the attacks, Levin issued a tepid assessment of the government’s response.

“We appreciate the present commitment to counter the rise in extremism, but we’d also like to see concrete steps taken,” he told JTA.

Yelena Vasilievna Mamontova, the head of the information department of Ukraine’s new Committee of Nationality and Religion, disputes the claims of rising anti-Semitism in the country. She says that Ukraine, like all countries, struggles with anti-Semitism, but that claims of rampant anti-Semitism are exaggerated.

“This kind of thing exists in every country, and it’s not worth making a big deal about it,” Mamontova told JTA. “There is no official discrimination against Jews whatsoever – there are no cases of Jews not being employed or accepted into university or allowed to enter politics. That doesn’t exist.”

Despite Yuschenko’s rhetoric this fall, the government has taken no further actions on anti-Semitism, observers say.

Experts now are warning of a growing xenophobia problem as serious as it is in Russia, which has struggled with extremism for more than a decade but does a better job of monitoring and prosecuting hate crimes.

“In 2007, I registered about 65 to 70 cases of racial violence in Ukraine and there were about five or six cases of murder,” Likhachev said. “We can see that in general, the level of xenophobia is growing very quickly with a very serious tendency.”

However, he noted, hate crimes against Jews have either stayed the same or declined even as they have risen against other minority groups, including blacks, Asians and Arabs.

Russia has experienced the opposite, with overall violence against Jews slightly up in 2006, though anti-Semitic vandalism was down, according to Alexander Verkhovsky, director of the Sova Informational and Analytic Center in Moscow.

While 2007 saw a slight increase in recorded anti-Semitic violence in Russia – there were nine attacks on 13 people – Verkhovsky said it is difficult to extrapolate a trend. In previous years, he explained, many Jewish communities chose not to report attacks, which could account for the increase.

Statistics aside, the feelings of fear and frustration in Ukraine remain.

“We live here, we’re part of the community and we think it does damage to Ukraine,” Stambler said.