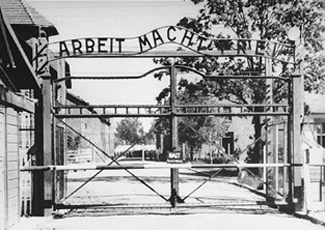 The entrance to Auschwitz's main camp in May 1945, with the infamous 'Work sets you free' sign. (USHMM, courtesy of Instytut Pamieci Narodowej )
Advertisement

SAN FRANCISCO (JTA) – In the past two years, the number of visitors to Auschwitz-Birkenau, the Nazi death camp in southern Poland, has nearly tripled to an unprecedented 1 million people annually. These astounding statistics comprise an international phenomenon – one that highlights the continued significance of Auschwitz as a memorial site, a museum and now a growing tour destination.

But the unanticipated influx of visitors seriously taxes the Auschwitz Museum’s resources, challenges the integrity of the visitor experience and begs the question of who is coming – and why?

Today’s visitors to Auschwitz-Birkenau primarily are students and casual tourists with no direct lineage to the Holocaust or its history. In previous eras, visitors had intimate ties to this most horrific of all the Nazi death camps; they came to seek information about relatives, to mourn and to remember.

As we mark the 63rd anniversary of the liberation of Auschwitz-Birkenau by the Soviet Red Army in the last days of January 1945, the growing generation gap and historical distance from World War II pose new questions about how to attend to the disparate needs of visitors as well as accommodate the overwhelming rise in numbers.

What is our responsibility to keep that history alive, accurate and thoughtful? How can the gaps in age, cultural history and knowledge be bridged? What is the visitor experience like today?

Imagine arriving to the site of the notorious death camps, disembarking from your vehicle in the exact spot where hundreds of thousands of innocent prisoners entered. You look up to the infamous entrance gate, as they must have, and see the haunting slogan, Arbeit Macht Frei (Work Makes You Free) welded onto the gate to the death camp. Then imagine the potential for a contemplative visitor experience being abruptly interrupted, as your line of sight can’t help but go to the vendors that crowd the sidelines of the gate’s entrance.

This placement of the vendors sets the wrong tone and detracts from a mood of respectful reflection, which is so necessary for one’s initial encounter to this portal of the past and the horrors that it represents.

Once a visitor arrives, the museum offers optional guided tours led by experienced and trained tour guides. While these are required of large group visits, they are not enough. There is a general lack of preparation for most casual visitors and a dearth of educational orientation for school groups.

This might help to explain the unfortunate reaction of some young people, who joke around when confronted by such tangible evidence of brutality as mounds of human hair and piles of children’s shoes. This is not to lay blame on our younger generations but to notice how the lack of education about the Holocaust can result in a dangerous sense of distance from it.

Visitors, especially young people, need to be better prepared before they come for what they will experience once they enter the site. Greater attention to education should include seeding new curricular programs throughout the world.

Only a few countries – including Israel, Germany and the Netherlands – make teaching about the Holocaust mandatory in school, while a few American states, including California, provide guidelines for Holocaust education in high school history and social studies curricula. These efforts must be greatly expanded.

The current Polish government keeps the Auschwitz site functioning and has ensured that the message taught there is historically correct. But the museum is woefully underfunded and relies disproportionately on increasing tourism to raise revenue without developing content or capacity.

It must be emphasized: This is no ordinary tour. It’s time to take the numbers seriously, and respond accordingly with professional studies and assessments of visitor demographics and experiences.

Past efforts spearheaded by the Polish government and private philanthropy were aimed largely at preservation, with little or no attention to interpretation, including education. In addition, the venerable International Auschwitz Council, founded in 1990 and whose members consist largely of Holocaust survivors, can do more to encourage improvements.

We need to examine where visitor interest is coming from now. For example, the first March of the Living tours set an important precedent for bearing witness to the death camps, but they created a distorted view of Poland as a vast cemetery for Jews.

Lacking is the valuable interchange of people-to-people encounters, so vital to creating reconciliation and overcoming hatred. As more casual tourists include the Holocaust sites as part of their overall tour of Poland, it is critical that their experiences reflect the truth of the past, as well as present-day efforts to come to terms with it.

In response to the need to tell a more comprehensive story of the death camps, some philanthropists are encouraging activities to develop educational tours and cultural resources. For example, my California-based Taube Foundation for Jewish Life & Culture, working with other international philanthropic and Jewish organizations operating in Poland, is pursuing such initiatives with input from Rabbi Michael Schudrich, the chief rabbi of Poland, to identify much broader cultural immersion and educational strategies for Holocaust trip participants.

With such concerted efforts, more can be done. Let’s start with relocating the concession stands to create a more respectful repose for the entryway without diluting the power of its message. Other logistical changes should include providing alternative transportation and entry points to both Auschwitz and Birkenau, with special attention to revised signs, interpretive materials and educational programs that point to the sanctity of the site.

Most significantly, the grounds themselves must be maintained as places for deep contemplation, personal reflection and transformation for a new generation who will pass on the lessons that must never be forgotten.

Tad Taube is chairman of the Taube Foundation for Jewish Life & Culture, president of the Koret Foundation and honorary consul for the Republic of Poland in California.