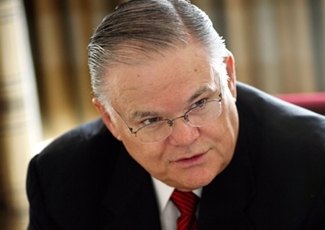 John Hagee, a pro-Israel televangelist and mega-church leader, created a storm with his endorsement of John McCain for president. (Courtesy of Christians United For Israel)
Advertisement

NEW YORK (JTA) – Many conservatives, not to mention Clinton supporters, were smiling wide last week during the Democratic debate in Ohio when MSNBC’s Tim Russert asked Barack Obama about being praised by Louis Farrakhan.

But the controversy faded almost before it started after Obama denounced the Nation of Islam leader’s anti-Jewish remarks and, with a little prodding from Hillary Clinton, rejected his words of support as well.

Instead, even as he moved to secure the Republican nomination with primary wins in all four states that voted Tuesday, it was John McCain who has spent the past week on the defensive over an endorsement from a controversial clergyman, John Hagee.

Hagee, the San Antonio-based televangelist and mega-church leader, is best known to American Jews for his rousing speech at last year’s annual AIPAC conference and his groundbreaking success in launching a Christian pro-Israel lobby.

Now he finds himself at the center of the presidential campaign, accused of bashing Catholicism, Islam and homosexuality. And despite his long record of supporting Israel and speaking out against anti-Jewish bigotry, he’s even being accused of anti-Semitism by some liberal critics.

At issue are a string of inflammatory comments and speeches, most notably a presentation posted to YouTube in which Hagee appears to describe the Roman Catholic Church as “the great whore of Revelations” and a “false cult system.”

The media and Democrats began to pounce on the issue after Bill Donohue, the president of the Catholic League, issued a public statement calling on McCain to follow Obama’s lead and denounce Hagee.

That liberals and Democrats are essentially taking their cues from Donohue – a self-described conservative and a high-profile defender of Mel Gibson during the fights over “The Passion of the Christ” – is just one of the ironies/hypocrisies to emerge during the debates on the campaign trail over Farrakhan and Hagee.

For starters, what to make of Republicans who rushed to condemn Obama over his pastor’s support of Farrakhan and charge the Democratic presidential hopeful of somehow not doing enough to speak out against the Nation of Islam, but are mum about McCain’s failure to condemn Hagee?

Or the Republican Party in Tennessee, which in its zeal to condemn Farrakhan’s anti-Semitism and paint Obama as sympathetic to intolerance against Jews, issued a news release that critics said attempted to exploit the religious and racial fears of voters?

The statement, which reportedly ended up drawing criticism from McCain, one of the state’s GOP senators and the Republican National Committee, included a photo of Obama in what was identified as “Muslim attire,” noted that his middle name was Hussein and pointed out that his mother was white – all while managing to confuse Islam with the Nation of Islam.

On the other side of the aisle, the Democratic National Committee was quick to slam Hagee, firing off news releases filled with inflammatory rhetoric from the pastor on an array of topics. Many of the quotes cited raised legitimate questions about Hagee’s views and, by extension, his endorsement of McCain.

But in suggesting that Hagee is in some way anti-Jewish, the DNC, along with some liberal pundits and bloggers, overreached.

To make its case on this front, the DNC has been pointing to Hagee’s assertion that “it was the disobedience and rebellion of the Jews, God’s chosen people, to their covenantal responsibility to serve only the one true God, Jehovah, that gave rise to the opposition and persecution that they experienced beginning in Canaan and continuing to this very day.”

Never mind Hagee’s long record of speaking up for Israel and speaking out against anti-Semitism; the quote in question accurately reflects classical Jewish theology and eschews the tendency in some Christian circles to demonize Judaism itself.

Yet it’s safe to say that many of Hagee’s critics would cry foul if Carter’s critics played the anti-Semitism card against the former president.

As for Hagee, he’s denied that he was talking about the Roman Catholic Church when he made the “great whore” comment.

“I am referring to the apostate church, namely those Christians who embrace the false cult system of Jew-hatred and anti-Semitism,” Hagee said in a statement, adding that he has also criticized the founder of Protestantism, Martin Luther, for the “horrendous anti-Semitism he spouted towards the end of his career.”

Donohue rejected that explanation, saying that Protestants have been targeting the “great whore” epithet at the Vatican for decades. Besides, he added, that doesn’t explain away Hagee’s repeated claims that the Catholic Church bears much blame for the Holocaust.

Hagee’s many critics would point out as well that it doesn’t address his attacks against Islam, nor his view that a series of tragic events, from Yitzhak Rabin’s assassination to Hurricane Katrina, can be explained as divine retribution – whether it be for surrendering land or tolerating homosexuality.

Undoubtedly, as the criticisms of Hagee mount and such comments gain more attention, Jewish groups will come under increasing pressure to sever their ties to the staunchly pro-Israel pastor.

But on this point, Donohue is willing to cut the Jewish community some slack.

“I wasn’t too wild about it, but I have a little more sympathy,” Donohue said, when asked about Hagee’s AIPAC speech. “If I’m a Jew and I know Muslims are out to kill me, it’s a little dicey to start questioning how clean he has to be.

“I have a little more sympathy. But the difference between AIPAC and a guy running for president is enormous.”