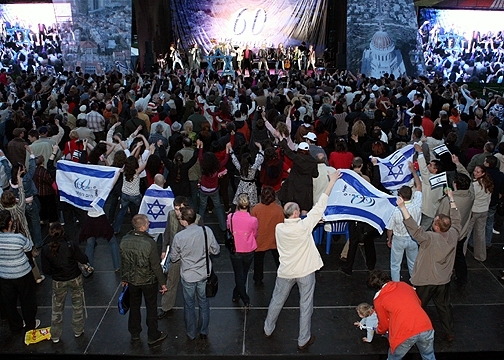 MOSCOW (JTA) – Nadezhda Gerzhoy splays her jacket and plops down in the middle of the verdant park, taking in the bright blues and whites of Israeli flags fluttering around her.

For 200 yards in every direction, nearly 7,000 Russian Jews mill about on a resplendent Sunday as the soft strains of “Hava Nagila” float over the largest gathering of the community in recent memory.

A 25 year-old interior designer, Gerzhoy was weaned on the first incarnation of Russian Hillel programs and first sampled Israel through a subsidized Birthright Israel trip earlier this year. On some Saturdays she prays at the Chabad-run Jewish community center, Moscow’s largest.

Gerzhoy is among scores of young Russians who form the lively base of the Russian Jewish community. For them, Israel is no longer an aspiration or an escape but a second home with its own upsides and downsides when compared to an oil-rich and resurgent Russia.

“I don’t know,” Gerzhov says as she contemplates a move to Israel. “It would be nice maybe in one or two years, for one or two years. I’ve thought about it, but not hard.”

Even as migration loses steam, Russian-speaking Jews living a dual life across both countries are anticipating the establishment of a visa-free exchange that could shift the way the two countries see each other.

From a folding chair in the corner of the VIP tent, Steven Schwager, the CEO of the American Jewish Joint Distribution Committee, surveys the crowd, his finger darting from one young couple to the next.

“Ten years ago, you might have had all elderly people show up, but young Jews wouldn’t show up,” Schwager tells JTA.

The flow of aliyah from Russia has slowed to a trickle and even reversed course. The Israeli Embassy here says tens of thousands who immigrated to Israel are returning to myriad economic opportunities or out of a desire for cultural familiarity.

Schwager says this is good news for Israel that Moscow can now be counted on as another pillar of the world Diaspora.

Outside the tent on the grounds of a large park on Moscow’s north side, young Russians draped in Israeli flags cheer a lineup of Israeli pop stars. This set came of age following the fall of the Soviet Union and the growing pains of a Jewish community working its way out from under often overt anti-Semitism.

Organizers of Sunday’s celebration of Israel’s 60th anniversary, based on advanced ticket sales, expected a crowd of just above 1,000. They looked thrilled and surprised as the turnout ballooned to 4,000, 5,000 and finally 7,000.

Though intracommunal politics still simmer and sometimes flare among Russian Jewish organizations, the park celebration represented a united effort featuring some of the biggest. The JDC-funded cultural center Nikitskaya and the World Congress of Russian Jewry were among the sponsors.

Russia’s Jewish community today projects even more monolithic support for Israeli policies than the U.S. Jewish community, which has a spectrum of political views simmering, says Baruch Gorin, a spokesman for the Federation of Jewish Communities, Russia’s largest umbrella organization and another event sponsor.

“They believe that they can help Israel as much as Israel can help them,” Gorin says.

The celebration of Israel’s 50th anniversary was much more subdued in Moscow, Gorin recalls, adding that anti-Semitism was so prevalent 10 years ago that a large gathering of Jews would have raised eyebrows with local officials.

Now, as the vise of Russia’s power structure tightens on the rest of the country, the Jewish community is experiencing something of a renaissance, Gorin says.

This is the “first period in the history of Russia that freedoms are less than they should be and the Jewish community situation is the best,” he says.

This sense of momentum and energy has shifted Russia’s perception of Israel, which in the past provided a haven for millions of Jews to escape the rubble of the collapsed Soviet Union.

“Ten years ago, or 15 or 20, to support Israel openly was something very rare,” Gorin says. “That’s why only in their kitchens and in their flats, Jews here were all Zionists.”

Ksenia Kuznetsova, 72, remembers the closet Zionism, but on Sunday she openly waves a balloon and Israeli flag from the comfort of a lawn chair as pop music flows from the main stage.

“Today, I am proud, very proud,” she says. “I know that we have a strong people, but this is the first time I’ve seen it like this, out in the open and under the skies.”

Like millions of Russian Jews, Kuznetsova has family in Israel – a daughter and two young grandchildren. She says her daughter is contemplating a move back to Moscow because the family misses Russian culture and they want their young children to grow up in that environment.

For a segment of the Russian-speaking community, the Israel-Russia decision is not so black-and-white, says Motya Chlenov, the head of the Moscow office of the World Congress of Russian Jewry.

“It’s like New York and Florida,” he tells JTA. “I think Israel now is thought of as a second home.”

The free flow of people between Israel and Russia may become even more pronounced if, as expected, visas are no longer needed to travel back and forth. Chlenov says this could shift the perception of Israel even for non-Jewish Russians.

If a visa-free regime is established, he says, Israel would be the most prosperous country to which Russians could travel without a visa.

Israel’s ambassador to Russia, Anna Azari, said last week that she hopes Israel’s parliament could iron out the details of a new agreement on visas by the fall. It had been expected to happen as early as June.

“For the momentum of Russia-Israel relations,” Chlenov says, “that would be as important as anything that has happened in the last 15 years.”

The Israeli toymakers who invented the pop-it (and Guess Who?) wanted to conjure a field of breasts