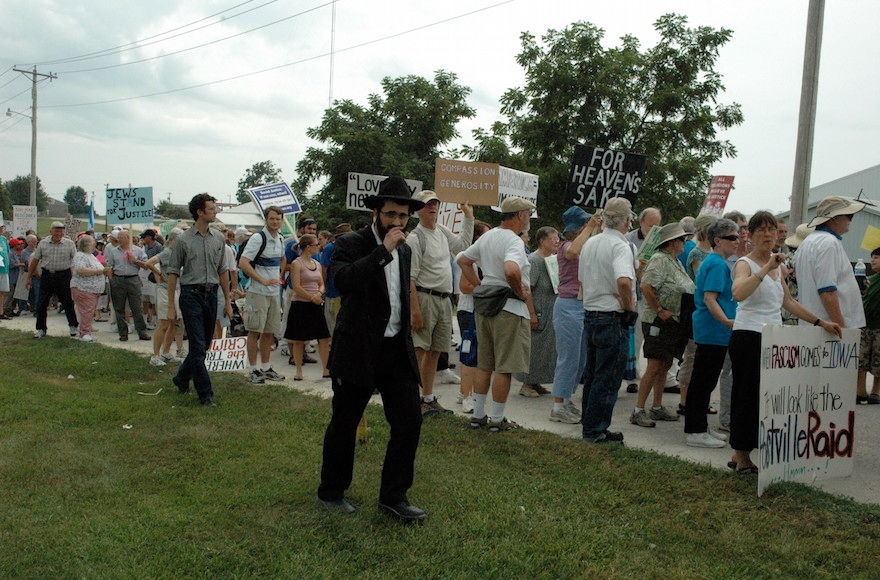 A protest at the Agriprocessors plant in Postville, Iowa, in 2008.
Advertisement

Calls are intensifying for a boycott of Agriprocessors, the nation’s largest kosher slaughterhouse.

Since Thursday, the Jewish Labor Committee called for a boycott of the company, the Conservative movement urged kosher consumers to consider one, and students at the liberal Orthodox Yeshivat Chovevei Torah have begun circulating a petition pledging not to consume Agriprocessors’ meat until company practices are changed.

Agriprocessors was the site of the largest federal work-site immigration raid in American history last week. The operation detained 389 illegal workers at the company plant in Postville, Iowa, including a number of juveniles.

In a policy statement released Friday, the Jewish Labor Committee said the company had displayed “a clear pattern of employer negligence and even lawlessness,” including the violation of child labor laws and toleration of various forms of worker abuse. The JLC urged consumers to seek alternative sources of kosher meat.

The yeshiva’s student petition asks the company to pay its workers at least the federal minimum wage, abide by laws pertaining to workers’ rights, and treat employees according to Torah standards.

“Until these changes are made, we feel compelled to refrain from purchasing or consuming meat produced by your company, and will pressure every establishment with which we do business to cease purchase of your meat,” the petition reads. “Effective June 15, 2008 we will stop patronizing any restaurant that sells your meat.”

The Conservative statement, issued jointly by its rabbinical and synagogue bodies, is a “request” that kosher consumers “evaluate whether it is appropriate to buy and eat meat products” from Agriprocessors.

Rabbi Menachem Genack, head of the Orthodox Union’s kosher department, the largest kosher certifier of AgriProcessors, said the O.U. is awaiting the outcome of legal proceedings against the company before coming to any decision. If AgriProcessors is found guilty of criminal charges, he said, the O.U. will withdraw its kosher certification.

Calls requesting comment from company representatives were not returned.