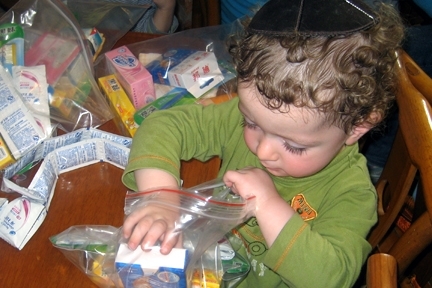 BEIJING (JTA) – In a gesture of support, one of the world’s smallest countries is sending aid to the world’s most populous nation in the form of $1.5 million worth of equipment for earthquake relief.

The first three tons of Israeli supplies to earthquake-ravaged China included sleeping bags, blankets and personal water purification units. The supplies arrived in China May 22 on an El Al flight to Beijing.

Israel will send the remaining 70-90 tons of equipment on a cargo plane directly to the city of Chengdu in the coming days. The Israeli government is working from a list of needs drawn up by the Chinese government.

Israelis and Jews in China are also helping with the relief effort in Sichuan province.

Dini’s kosher restaurant in Beijing is donating 10 percent of this month’s sales toward the earthquake relief effort.

The children of the Chabad-run day school in Beijing, Ganeinu, assembled 180 relief kits with supplies such as toothbrushes as well as handmade drawings and notes.

The president of Chabad’s Shanghai Jewish community, Maurice Ohana, is working on plans to have a Jewish-sponsored rebuilding of a devastated school in Sichuan.

Dani Yaacobi, an Israeli living in Chengdu, says the city’s Israelis are collecting and buying supplies, and delivering them to areas where newly homeless people are arriving from outside the city. They also are helping build shelters.

Besides the larger gift of supplies, the Israeli government also will give an additional $10,000 directly to the Hongkou area.

Some of those involved in the relief effort said they were touched by the story of the two Israeli students injured near the quake’s epicenter and rescued through grass-roots efforts by Israelis and Chinese after a two-day search.

Anat Bilu and Maayan Segev, both in their mid-20s, were on a backpacking vacation. Both were studying Chinese medicine in Chengdu through an exchange program with Israel’s Reidman College of Complementary Medicine.

Just before the earthquake hit, they were relaxing over lunch in a small cafe inside the Hongkou nature reserve in Dujiangyan. When the ground began shaking, the two women ran outside. Just as they reached a low wall barrier around the cafe, the cafe collapsed. They were struck by the falling rubble and their bodies smashed into the barrier.

Segev took the impact on her jaw, while Bilu suffered severe damage to fingers on her left hand.

Helped by several Chinese people along the way, the women found temporary shelter in the mountain village of Hongkou. Like many Chinese in this remote location, the two Israelis did not realize the full scale of the disaster.

Some of the Chinese translating for and helping the women had just lost their own homes and families.

Spearheaded by a friend of the students, Yael Arnon, Israelis in Chengdu formed a search party headquartered in an apartment. Arnon told Israel Army Radio that because the missing students were on the phone moments before the earthquake struck, she knew approximately where to find them. She assumed that communication difficulties were the only reason they had not called.

The Israeli Embassy in Beijing shared the same assumption. Consul General Alon Shoham, a press officer and a Chinese staffer boarded one of the first flights to Chengdu two days after the earthquake.

A Chinese construction magnate named Zhang was leading the rescue efforts in Sichuan. When the Israelis arrived in Chengdu, Zhang offered them three of his cars and two drivers – Zhang himself drove the third car – for the search effort.

By then, Segev and Bilu had decided to leave Hongkou and spent more than six hours descending to the main road. Eventually they crossed paths with two Israelis from the rescue party. That evening, the students reached the embassy staff and boarded an ambulance, arriving that night at an inundated Chengdu hospital.

“In Israel we know about crisis events with lots of casualties,” said the Israeli Embassy spokesman who traveled with Shoham, Guy Kivetz. “The medical teams were really angels. They acted bravely, quietly and professionally.”

Segev was operated on immediately in Chengdu to repair multiple fractures to her jaw. Bilu underwent surgery in Israel to repair nerve damage to her fingers.

“It was very Israeli to independently organize their own search party,” Kivetz told JTA. “But from the story of the girls’ rescue we learn that we are the same, that as much as Israelis do for each other, so do the Chinese.”