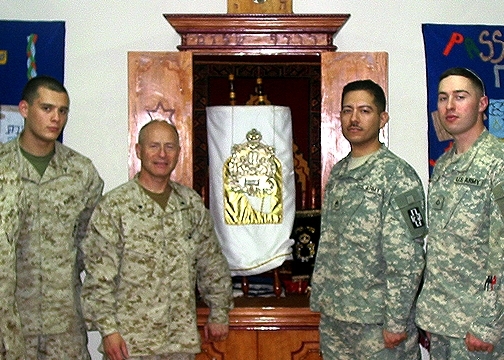 Rabbi Jon Cutler, left of Torah, with Jewish personnel in the chapel on his Iraqi base, says his faith has "grown stronger" as a chaplain in a war zone. (Courtesy Rabbi Jon Cutler)
Advertisement

NEW YORK (JTA) – Plenty of rabbis lead their congregation’s book club, but Jon Cutler may be the only one who does so from a war zone.

Cutler, the spiritual leader of Congregation Tiferes B’nai Israel in Warrington, Pa., for eight years, has been serving in Iraq since November as a U.S. Navy commander.

The only Jewish Navy and Marine chaplain in Iraq, he is attempting to create a “viable Jewish community” at the five U.S. Navy bases in western Iraq with Shabbat services, learning programs and even a bet midrash.

Still Cutler, in his early 50s, is staying in touch with his Reconstructionist congregation in Bucks County. He receives four to five e-mails per day from congregants and continues to guide the book club, which meets every four to six weeks at a local Panera Bread bakery-cafe in Montgomeryville.

“You’d really think he could see us,” said Joyce Burstein, the book club’s founder. “When members are speaking to him on the phone, they smile at him.”

The book chosen for discussion is sent to Cutler. The date of the meeting is dependent on how quickly the book reaches the rabbi – if it reaches him at all. To accommodate his schedule, meetings are held late in the afternoon Iraq time.

On June 22, participants gathered to discuss “Endless Light” by David Aaron, a Kabbalah-themed book about “love, spiritual growth and personal power.” They arrived with questions, insights and research on the subject, most of which were directed to Cutler once he joined the meeting via phone from 6,000 miles away.

But the book wasn’t the only thing on some minds. Before Cutler came on the line, congregants Thaierry Steenberghs and John Green talked about how best to bake challah that will stay fresh for the weeklong air mail journey to Cutler’s base.

“If you add honey, it makes it moister and will last longer,” Steenberghs said.

Cutler called Steenberghs’ cell phone, and the room hushed so everyone could hear the rabbi. First the phone was passed around so each of the 11 congregants – turnout was lower than usual – could say hello.

Participants and the rabbi then launched into their discussion. They talked about the observance of commandments as an opportunity to connect with people and the synagogue, achieving a constant union with God and “others,” and tikkun olam, or repair of the world.

The phone was passed to each speaker so the rabbi could hear and respond.

At the end of the talk about Aaron’s book, Cutler spoke about the situation in Iraq.

“The troops’ spirits are pretty good,” he said.

Asked about recent bombings in Baghdad, Cutler explained that insurgent activity has risen since the dust storms subsided – a correlation between weather and terrorism that had not occurred to his congregants.

The rabbi was on the phone for an hour and a half.

Cutler told JTA that his faith has “grown stronger” in Iraq and his prayers are “more spiritual and intense because of where we are.”

Cutler, a 1987 graduate of the Reconstructionist Rabbinical College, will remain in western Iraq until early next year. He is based at the Marine air base Al Asad in the Anbar province of Iraq and recently was promoted to wing commander.

The chaplain says he has been especially impressed with the unity among people of different faiths in Iraq.

“The world of Navy chaplaining is a great example of how people should really live – with respect and tolerance,” he said.

Burstein believes that Cutler’s service – in 1991 he also spent four months during Operation Desert Storm in Kuwait and Saudi Arabia – has had a positive impact on the synagogue’s atmosphere. She and her husband have noticed more respect from children in the synagogue.

“I think that comes from the rabbi’s military experience,” she said.

The synagogue and soldiers in Iraq have forged ties. Cutler’s assistant in Iraq sends out a weekly newsletter, and the rabbi frequently sends pictures home.

At this spring’s Bucks County Jewish Festival, the congregation organized a letter-writing campaign to American troops.

Jerry Fox, the congregation’s immediate past president and the father of a veteran Air Force officer, says festival goers were so impressed upon hearing that the synagogue’s rabbi was in Iraq, they came over to write letters.

While congregants say Cutler is sorely missed, they believe something beneficial has come from the difficult situation.

“We miss him terribly,” Burstein said, “but we know what he’s brought to us he’s bringing to the troops.”