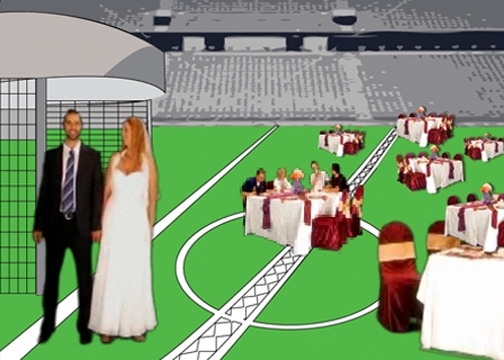 TEL AVIV (JTA) – In an online game, prospective Israeli brides and bridegrooms construct their dream wedding – everything from venue to guest list to food.

Finally the punch line arrives: What kind of ceremony would they choose?

For most Israelis, there is little choice.

In a country without civil marriage, an Orthodox ceremony performed by the Chief Rabbinate is the only legally recognized union for Jews.

A growing number of Israeli Jews, however, are bypassing the Rabbinate and marrying abroad. Some do so because they are not considered Jewish according to halachah, or Jewish law. Others are turned off by the Rabbinate’s reputation for sluggish bureaucracy and pedantic questioning of petitioners’ Jewish identity.

The Conservative movement in Israel, called Masorti, is tapping into this discontent.

Its new advertising blitz is spreading the message that other ways are available to marry within the fold of Jewish tradition in the Jewish state. Launched June 15, the campaign includes radio spots, newspaper and online ads, and the online “Play the Wedding Game” portal.

The campaign has been a surprise hit for the movement, generating 35,000 hits on its Web site in just a few weeks, as well as a huge spike in phone calls and e-mail inquiries to its Jerusalem office.

It also has angered Shas, an Orthodox political party.

Yaakov Margi, the party’s Knesset chairman, asked the Israel Broadcasting Authority to pull the Masorti radio ads from the airwaves. In a letter to the authority, Margi wrote that the Masorti movement “knowingly misleads and perpetrates a campaign of fraud” because it misrepresents its wedding ceremony as traditionally Jewish.

The Rabbinate also is taking issue with the campaign, asking the government to shut it down, according to Avi Blumenthal, a spokesman for the Rabbinate.

Couples who consider the Masorti movement and marry under Conservative auspices still will not have their marriages recognized in Israel. They will need to marry abroad to gain legal recognition in the Jewish state.

The Masorti movement remains unrepentant, saying it hopes the campaign will convince more Israelis to marry in Jewish ceremonies rather than in civil ceremonies overseas. The movement estimates that some 20 percent of Israeli marriages take place abroad, many in nearby Cyprus.

“Young couples are giving up totally on having a Jewish chupah, and we as a movement think that’s very problematic,” said Rabbi Tamar Elad-Appelbaum, the director of the Masorti movement’s wedding initiative. “Because of their reluctance to go to the Rabbinate, which they hear is a difficult process, they give up on their heritage.”

The idea of the ad campaign, she said, is to show Israelis there’s an alternative.

“We want them to see there is another way to marry, and that’s the Jewish way, under a chuppah, as has been done from generation to generation,” she said. “We need to make sure our young people do not lose touch with their traditions.

“And at the same time,” she added, “we want them to see they can still remain true to themselves at this important moment.”

While most Israelis are not religiously observant, Reform and Conservative Judaism have found little traction in Israel. Orthodoxy dominates religious life, with membership in non-Orthodox religious movements negligible by comparison.

Andy Sacks, the head of the Masorti movement’s rabbinical assembly, attributes the success of the movement’s wedding ad campaign to popular alienation from the Rabbinate, which he says is out of touch with the Israeli public.

“I think this sort of stemmed from a confluence of events – shmitta and people talking about the Rabbinate not meeting their needs, and then that conversions started being canceled,” he said, citing two recent controversies surrounding the Rabbinate.

In the shmitta controversy, the fervently Orthodox wing of the Rabbinate tried to impose extra strict regulations concerning observance this year of the shmitta sabbatical, during which Israel relies on Jewish legal loopholes to circumvent the biblical injunction to let the land of Israel lie fallow every seven years.

The other controversy concerned a threat in Israel to revoke the conversions of those who do not lead religiously observant lifestyles.

“With all this going on, we realized there was a niche for people who have respect for tradition but a bad taste in their mouth from the religious establishment,” Sacks said.

Blumenthal, the Rabbinate spokesman, rejects the criticism. He insists the Rabbinate is not out of touch with the public’s needs and has been doing its best to streamline the marriage process.

“We need to do what we do to assure we are following Jewish law; there is no unnecessary bureaucracy,” he said. “And we are working to improve our services all the time.”