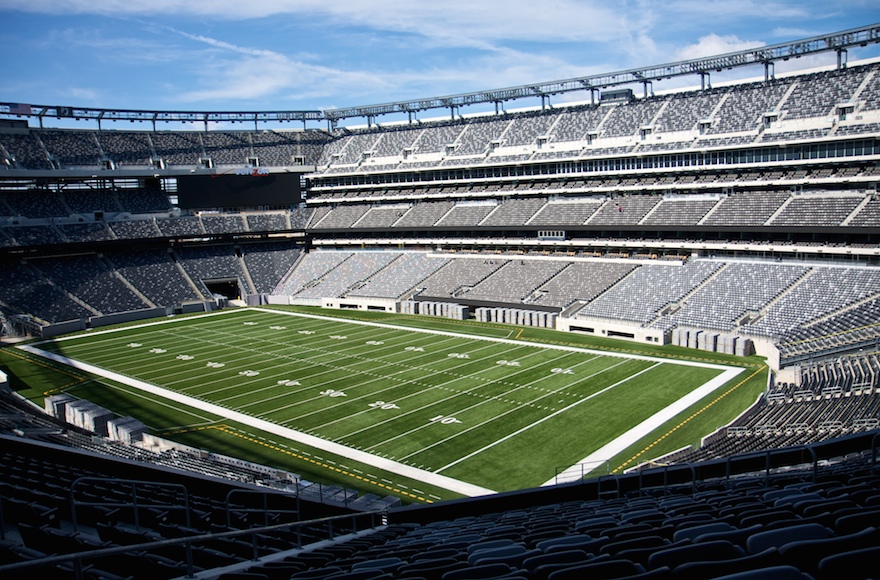 Two NFL football teams have ended talks with a Holocaust-era insurance company over naming rights to their new stadium.

In a statement Friday, Mark Lamping, president and CEO of the new stadium for the New York Jets and Giants, said his organization is “no longer in discussions with Allianz for a naming rights partnership. We are continuing discussions with other potential partners for the new stadium and look forward to the summer 2010 opening of this new icon for our region.”

Criticism of the deal emerged earlier this week after reports that the two NFL franchises were in talks with Allianz, the Munich-based German insurance giant, over the naming rights to their new $1.3 billion stadium. The stadium is being built in the current Meadowlands sports complex in New Jersey and will seat more than 80,000 fans.

More than six decades ago, Allianz insured facilities and personnel at concentration camps like Auschwitz and Dachau, had a chief executive who wore an SS uniform and served as Hitler’s economics minister, and refused to pay the life insurance policies of Jews, instead sending Jewish beneficiaries’ cash to Nazis.

Various Jewish organizations had joined critics of the potential deal, saying it was inappropriate to name a major sports stadium for an organization with a Nazi past, particularly in an area with the nation’s highest concentration of Holocaust survivors.

“The New York region is home to many Holocaust survivors and their families and to World War II veterans for whom memories of the war are still vivid,” the Anti-Defamation League said in a statement Thursday. “We hope that the teams’ ownership will take this into account as they move toward a decision on naming rights.”

Scott Stringer, the Manhattan borough president, wrote to Giants and Jets executives asking them to end talks with Allianz, according to The New York Times.

Allianz’s defenders said the company attempted to make amends for its wartime history, participating in the International Commission on Holocaust Era Insurance Claims and paying millions to elderly Holocaust survivors believed to have held policies with the company. But critics say the company did so only under duress and should not be permitted to commit another affront to the sensibilities of survivors.

“This company, Allianz, had to be forced to make the payments,” said Rabbi Marvin Hier, founder of the Simon Wiesenthal Center. “They fought it tooth and nail.”