Rahm Emanuel's closeness to the Jewish community was seen "a tiny factor, if at all" in his hiring as Barack Obama's chief of staff. (U.S. Congress)
Advertisement 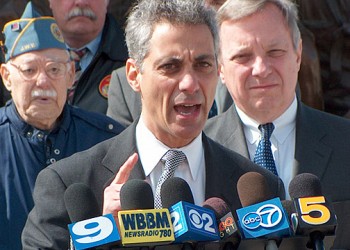 WASHINGTON (JTA) – Political insight, killer in a fight, Yiddishkeit – it’s an inseparable package when it comes to Rahm Emanuel, say those who know President-elect Barack Obama’s pick to be the next White House chief of staff.

Since his days as a fund-raiser and then a “political adviser” – read: enforcer – for President Clinton, Emanuel has earned notoriety as a no-holds-barred politico. Accept the good with the bad because it’s of a piece, said Steve Rabinowitz, who worked with Emanuel in the Clinton White House.

“He can be a ‘mamzer,’ but he’s our mamzer,” said Rabinowitz, using the Yiddish term for “bastard,” speaking both as a Democrat and a Jew. “Sometimes that’s what you need.”

The apocrypha is legendary, if somewhat hard to pin down: Jabbing a knife into a table screaming “Dead!” as colleagues shout out the names of political enemies, sending a dead fish to a rival, screaming at friends and enemies alike for no good reason.

Even his allies acknowledge that Emanuel, 48, can be on edge at times.

“He’s not running for Miss Congeniality, ever,” said U.S. Rep. Jan Schakowsky (D-Ill.), who has known Emanuel since they worked at Illinois Public Action, a public interest group, in the early 1980s. “He is relentless, he doesn’t give up, but in a strategic way. He’s good at figuring out other people’s self interest and negotiating in a way that comes out in his favor.”

Emanuel, an Illinois congressman who boasts strong ties to his local Jewish community and the Jewish state, also can be seen as embodying Obama’s stated commitment to Israeli security and diplomacy: During the first Iraq war, Emanuel flew to Israel as a volunteer to help maintain military vehicles. Two years later he was an aide to Clinton, helping to push along the newly launched Oslo process.

Within four months of joining the U.S. House of Representatives in 2003, Emanuel had an impressive command of the issues, said Michael Kotzin, the director of the Chicago Jewish Community Relations Council.

“He gave a thorough and insightful analysis of issues on our agenda,” said Kotzin, adding that Emanuel was responsive to his Jewish constituents.

Obama chose Emanuel to escort him to a closed-door meeting with leaders of the pro-Israel lobby AIPAC in June, a day after the final Democratic primaries.

One thing Emanuel is not, all agree, is the president-elect’s conciliatory signal to the Jewish community after a campaign fraught with worries that Obama would tip toward even-handedness in dealing with the Middle East.

Emanuel was chosen strictly for his political skills and his closeness to Obama, said Rabinowitz, whose public relations firms does work with both Jewish groups and the Democratic Party and its affiliates. His closeness to the Jewish community “would be a tiny factor, if at all” in the hiring, Rabinowitz said.

The Arab and pro-Arab media have made much of the fact that Emanuel’s father is Israeli, and Benjamin Emanuel didn’t improve matters in an interview with Ma’ariv.

“Obviously,” the senior Emanuel told the Israeli daily, “he’ll influence the president to be pro-Israel. Why wouldn’t he? What is he, an Arab? He’s not going to be mopping floors at the White House.”

By the time JTA reached the elder Emanuel, a physician, it was clear his son had asked him to keep away from reporters. Picking up the phone, he said, “This is Benjamin Emanuel, the plumber,” and asked a reporter to call back in a week, after he’d spoken in person to Rahm – “if I’m still alive then.”

In truth, some observers say, Obama’s Jewish supporters and Emanuel’s Arab critics are oversimplifying by painting the new chief of staff as a guardian of Israeli interests.

Emanuel will be a strong voice for Israeli security – but also one with the standing to cast a skeptical eye on some Israeli claims.

“Rahm, precisely because he’s a lover of Israel, will not have much patience with Israeli excuse-making,” Jeffrey Goldberg, a writer for The Atlantic, suggested on his blog.  “So when the next prime minister tells President Obama that as much as he’d love to, he can’t dismantle the Neve Manyak settlement outpost, or whichever outpost needs dismantling, because of a) domestic politics; b) security concerns; or c) the Bible, Rahm will call out such nonsense, and it will be very hard for right-wing Israelis to come back and accuse him of being a self-hating Jew.”

Tom Dine, a past president of the American Israel Public Affairs Committee and a senior policy adviser to the Israeli Policy Forum, concurred and said that Emanuel’s knowledge of the issue will mean i’s are dotted and t’s are crossed.

“God help the national security staffer who incorrectly spells an Israel town name,” Dine said. “Having said that, he has to be very careful, he can’t step on the toes of the secretary of state, the national security advisers, of Joe Biden,” the vice president-elect whose emphasis will be foreign policy.

The significance of Emanuel’s Jewishness is more how unremarkable it is that an unapologetic Jew should rise so far, said Abraham Foxman, the national director of the Anti-Defamation League.

“He has never hesitated to wear it proudly on his sleeve,” Foxman said.

During Emanuel’s freshman run for Congress in 2002, a backer of his Democratic primary opponent in the largely Polish district noted his service in Israel during the first Iraq war. Emanuel shrugged off the accusation as true – and won by a wide margin.

His brother, Hollywood super agent and liberal activist Ari Emanuel, also has been unapologetic about his support for Jewish causes. He sparked headlines when he called on people in the movie industry to blackball Mel Gibson over “The Passion of the Christ.”

Both brothers have inspired a television character: Rahm is said to be the model for Josh Lyman on “The West Wing,” and Ari more famously is immortalized as the agent/predator Ari Gold on the HBO series “Entourage.”

A year ago, honoring his Hollywood agent brother for supporting children with learning disabilities, Rahm Emanuel recalled returning from Israel in 1967. More than his brothers, Emanuel remembered, he tended to darken in the Israeli sun. He was scooting around on his bike when a bigger kid grabbed it, saying black kids weren’t welcome in the neighborhood.

Ari, Rahm recalled, “beat the crap out of him” — not because of the bike, not to protect his brother, “but because of what he said about black kids.”

In general, Emanuel is fiercely loyal to his family, and they were a consideration in his hesitation to take work he’s always dreamed of having – he waited two days to say yes. Obama, in his statement announcing the pick, recognized the pain it would cause Emanuel’s wife, Amy, and “their children, Zach, Ilana and Leah.”

Emanuel, born to an Israeli doctor who married a local woman after he moved to Chicago in the mid-1950s, speaks Hebrew and fondly recalls summering each year in Israel as a child – including just after the 1967 Six-Day War. He attends Anshe Sholom, a Modern Orthodox synagogoue in Chicago, and sends his children to Jewish day school.

His rabbi, Asher Lopatin, recalls Emanuel approaching him just before Rosh Hashanah this year, telling him that an effort to put together a bailout package for the hard-hit stock market before the holiday had failed and asking whether it was permissible to take conference calls on the holiday in order to salvage the bill.

“I asked, ‘Is it as serious as people say it is?’ ” the rabbi recalled. “He said, ‘Without this bill there could be a meltdown of the financial system.’ “

Lopatin considered the effect such a failure would have on children and the poor.

“I felt it was a case of ‘pikuach nefesh,’ ” the commandment that places the saving of life above all other commandments, Lopatin said, and gave Emanuel the OK.

The somberness of the request couldn’t quell Emanuel’s acerbic wit. Lopatin recalled Emanuel’s teasing, wondering whether the status of the rabbi’s 401(k) investments wasn’t also behind the hechsher.

“He kibitzed with me about that,” the rabbi said.

Emanuel repeated the story, to raucous laughter, in caucus meetings on the Hill – an example of how he will skid in the same sentence from Judaism to a liberal commitment to social reforms to hard-nosed politics, Schakowsky said.

“There’s barely a caucus meeting where he doesn’t make some reference to being Jewish, often in a humorous way,” she said.

But his Jewishness does more than inform his sense of humor, Emanuel’s rabbi said.

“He has a very deep commitment and feel for Yiddishkeit,” Lopatin said, “and it’s a Yiddishkeit that’s about ‘tikkun olam,’ having a positive effect on the world.”