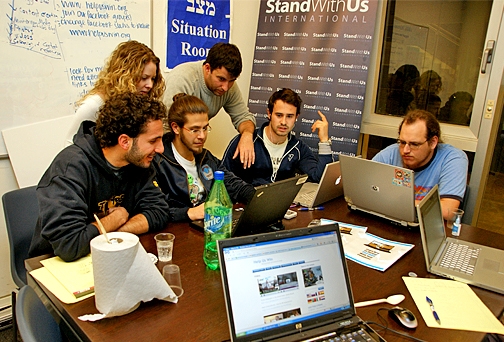 NEW YORK (JTA) — As Israel takes to the Internet in search of innovative ways to make its case about Gaza to the world, Jews around the globe also are utilizing innovative methods — and particularly new technological tools — to explain what the Jewish state is facing as it acts to protect its southern flank from rocket fire.

StandWithUs, a Los Angeles-based pro-Israel group, has established a round-the-clock Internet task force — in cooperation with the Interdisciplinary Center in Herzliya, Israel — to monitor Web sites and provide instant responses to attacks on the Jewish state. Some 15 to 20 volunteers staff two situation rooms, in Herzliya and Jerusalem, that promote pro-Israel content on social networking Web sites, respond to online opinion polling and try to alter the tenor of discussions in Internet chat rooms.

The group also has launched a Web site, HelpUsWin.org, that provides links to public opinion polls on the conflict, online articles in need of response and ideas to integrate pro-Israel symbols with profiles on sites such as Facebook. It also features pictures and videos that highlight Hamas’ indoctrination of children and the humanity of Israeli soldiers.

“We’re trying to dictate the Net agenda as well as respond to it,” Michael Dickson, the director of the StandWithUs office in Israel, told JTA.

Much of the online activity related to the Israel-Hamas battle in Gaza centers around Facebook, the hugely popular networking site that has seen a noticeable upsurge in political content related to the conflict. More than 5,000 users are attending a virtual rally on the site organized by the World Zionist Organization. Pro-Israel users are being encouraged to change their profile pictures to “I Love Israel” and donate their “status update” to keep track of the terrorist rockets landing in southern Israel. Some 1,200 users are listed as “fans” of the rocket application, which automatically updates whenever a rocket lands in southern Israel.

In Los Angeles, the Israeli Leadership Council, an Israeli-American community group, has launched a number of online initiatives to press Israel’s case. Among them are the Web sites Live4Sderot.org, which raises money and awareness for the citizens of Israel’s embattled southern frontier, and Tzav8.org, which encourages Israeli Americans to register for notification of pro-Israel events. The site’s title is a reference to the order that calls up Israeli reservists in wartime.

Even the larger, more established Jewish groups are trying to influence the digital discussion.

The Anti-Defamation League has launched an Israel defense page on Facebook that has attracted nearly 2,000 members. The ADL also has made posters available for download in what it hopes will spark a “viral media campaign” on Israel’s behalf.

“I think it’s certainly possible to influence younger Jews using social media. I think that’s a correct instinct,” said Esther Kustanowitz, a well-known contributor to several major Jewish blogs. “What I’m finding personally, and I can only assume I’m not the only one who feels this way, is that I’m overwhelmed by requests to express my support for Israel by joining every possible group on Facebook. I get six to eight of them a day.

“And it’s not like the groups are mobilizing towards anything. It’s just an expression — I’m for the war, I’m against the war. For me, joining a group is not necessarily a helpful show of support for peace or against violence.”

The effort comes as Israel, constantly at pains to explain itself to the world, has itself utilized cutting-edge Internet tools to present its side of the conflict.

In New York, the Israeli Consulate conducted an online citizens’ “press” conference, while the Israel Defense Forces has established its own channel on the video sharing site YouTube. The channel features aerial video shot from Israeli warplanes showing the destruction of suspected Hamas targets.

To be sure, online political activism is hardly the sole province of the pro-Israel community. Palestinian solidarity activists and Jews opposed to Israel’s military operations have also taken to the Internet — arguably with greater force and visibility.

“The short of it is, if you look at the communities that power social news Web sites, because these communities tend to be composed of early adopters who generally tend to have a more liberal bias, the stories you tend to see promoted will mostly favor the Palestinian side,” said Muhammad Saleem, a social media consultant in Chicago.

“I’m seeing the same thing happen on Facebook as well. There are groups arguing both sides of the issue, but the groups that get the most attention tend to be liberal and lean towards the Gazans’ side of the issue.”

Saleem stressed that he was describing only the balance of opinion he’s seeing online, not the rightness or wrongness of particular points of view.

However much it lags behind some pro-Palestinian forces, the use of new media during the Gaza clashes represents a significant advance in the degree of Web savvy demonstrated by the Jewish community and serves to complement more traditional means of political activism, of which there has been little shortage since the conflict broke out in late December.

Dozens of pro-Israel rallies have been held, and more are planned, in more than 50 U.S. cities. Leaders of the Jewish community, along with political and ecumenical officials, have congregated outside of consulates, Holocaust museums, community centers and universities to express their support for Israel.

The Jewish Council for Public Affairs, in cooperation with the United Jewish Communities, organized more than 60 rallies across the United States in recent weeks. Amos Kamil, the director of JCPA’s Israel Advocacy Initiative, said the plan was to provide a response to the anti-Israel groups receiving media attention.

“We started to see a lot of this was being played out on television screens and computer screens,” Kamil said. “And although much of the community was in support of the Israeli action, it wasn’t really showing up on the streets.”

Indeed, across the country a swell of anti-Israel rallies provided venues for some incendiary language directed against Jews.

In New York, one Palestinian supporter held a sign calling for “Death to all Juice”  [sic]. In Florida, protesters told pro-Israel demonstrators to “go back to the ovens.” And in Kansas City, a protest that attracted 400 people accused Israel of “genocide” and perpetrating a “holocaust” against the Palestinians. One sign that showed a crucified man surrounded by Israeli tanks read “Same Place, Same Way, Same Damn People.”

The demonstration was organized by the Kansas City chapter of the Muslim American Society, which according to a Jan. 5 ADL report “has a troubling history of associations with radical organizations and individuals that promote terrorism and anti-Semitism, and reject Israel’s right to exist.”

Reacting to the intensity of rhetoric on both sides, one group of demonstrators in New York sought to transcend what they believed to be the demonization by both camps by calling upon both Israel and Hamas to stop endangering civilians and to sign on to a cease-fire agreement. The group’s call to action invited participation from those who “believe in the rights of both Israelis and Palestinians to live in peace and security.” Organizers estimated that some 40 mostly young Jewish professionals attended.

Kamil said that even the small rallies organized by the JCPA and UJC were an important refutation of the rampant anti-Israel sentiments.

“Although the numbers might be more impressive in a place like New York or Chicago, a rally which affects the local media outlets in smaller communities [is] equally as important to just shaping public opinion about Israel,” he said.

The rallies have also successfully attracted a number of local politicians, including U.S. Sen. Charles Schumer (D-N.Y.) and Gov. David Paterson in New York, and Mayor Antonio Villaraigosa in Los Angeles. Villaraigosa caught flak from the city’s Muslim leaders for his outspoken support of the Jewish state.

“It’s important for me as a public official to identify my office and the 125,000 people that I represent with Israel’s position,” said New York state Assemblyman Rory Lancman, a Democrat from Queens, on the sidelines of a rally Sunday in New York.

Lancman accompanied a delegation of state legislators to Sderot and Ashkelon in the second week of December before the war had commenced.

“People I met are now living under a reign of terror that no country in the world would tolerate,” he said. “Certainly the United States wouldn’t tolerate it.”

In Ann Arbor, Mich., where the Jewish community numbers about 7,000 to 8,000, excluding the University of Michigan population, 250 people was considered a healthy turnout for Sunday’s rally at the local Jewish community center.

“People in the community want to come together in times like this,” said Eileen Freed, the director of Israel, Overseas and Community Relations at the Jewish Federation of Greater Ann Arbor.

The quick organization of dozens of rallies across the country earned plaudits from some quarters. But among tech-minded activists, street rallies cannot respond at the speed of the Internet.

On sites such as Facebook, “everyone has hundreds, sometimes 1,000 friends — Jewish, non-Jewish, Israel supporter and non-Israel supporter,” said Dickson of StandWithUs. “You post up a video that in less than a minute can portray what it’s like to live in Sderot right now.

“Suddenly you have a whole group of people that understands Israel’s position and why Israel needed to act.”